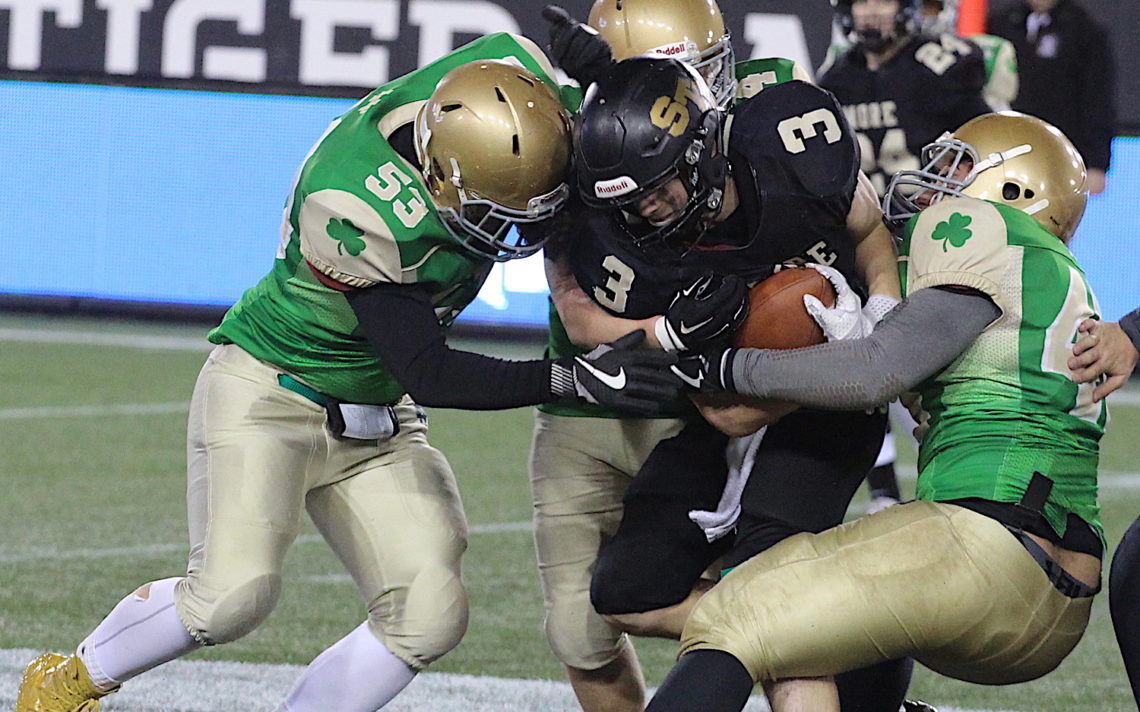 Notre Dame fell 57-7 to the St. Thomas More Knights in Tuesday night’s Golden Horseshoe Bowl but the loss shouldn’t detract from what has been an excellent bounce-back season for the Welland high school. It was only two seasons ago the team failed to win a game and last year the team only recorded three victories.

“It was like a dream come true,” Notre Dame receiver/defensive back Jake Porter said. “We started from nothing with an 0-6 season, then we got a couple of wins and it all started with the guys in Grade 11.

“We knew we could do it, we came together and we worked hard.”

Tuesday’s game was the last of his high school career for Porter, who is in his second year of Grade 12.

“I have a lot of good memories and I love all the guys I played with,” the 17-year-old  “I wouldn’t trade it for the world.”

Quarterback Brandon Graziani, receiver Jonah Gruarin and Porter were all members of the winless team of three seasons ago.

“I can look those guys in the eye and say I gave it my all,” Porter said. “That’s all that really matters.”

The 6-foot-1, 190-pounder will now set his sights on playing at the post-secondary level.

“I am going to go on my official visits, work hard and get my grades up and see where that takes me,” the Welland resident said. “I’m not certain where I want to go but somewhere in Ontario.”

Bisci felt his team was done in by Murphy’s Law Tuesday night.

“Everything that went wrong in the whole season went wrong tonight,” Bisci said. “But we won 10 games and I have been around the program a long time and no one has ever won 10.

“To get 10 last week against Allan MacNab was a big deal and we ran up against a team that’s probably the best in the country.”

Bisci couldn’t have been more prouder of his team.

Bisci didn’t want to speculate what his team would look like next season.

“It’s tough and, at this time of the year, I don’t even want to think about it.” he said. “We lose Brandon, Jake and Jonah and not only are they great football players, they are great people to be around.

“If was fun being around them and watching them grow.”

St. Thomas More came into the game ranked fourth in Canada with a 9-0 record. The Knights defeated the 25th-ranked Holy Trinity Titans 58-18 to capture the Golden Horseshoe Athletic Conference championship and had won two straight OFSAA bowls — the Golden Horseshoe Bowl in 2015 and the Eastern Bowl in 2016 — heading into Tuesday’s game.

Tenth-ranked Notre Dame stopped the Knights on their first three possessions, including forcing two turnovers on downs, before St. Thomas More scored majors on its next six possessions. The Knights outgained the Irish 567-135 on the night and Graziani spent much of the night running for his life. He was sacked seven times.

“We were behind the eight ball right away,” Bisci said. “Justin Succar went down and that really demoralized our run game and then Gerrid Holton and Sean Croucher went down.

“We had no linemen left and we were just trying to piece it together at the end after Mak Burger went down.”

Despite watching the Knights pile up 57 points, Bisci was more impressed with St. Thomas More’s defence.

“Their offensive line opened up huge holes and that kid (five-touchdown scorer Michael Chris-Ike) wasn’t even touched,” he said. “I’m not taking anything away from that kid, but their offensive line played so well that’s it’s hard to say how good he was.”

Chris-Ike was on the field the entire game and had a sack or two on defence. He is being recruited by UConn.