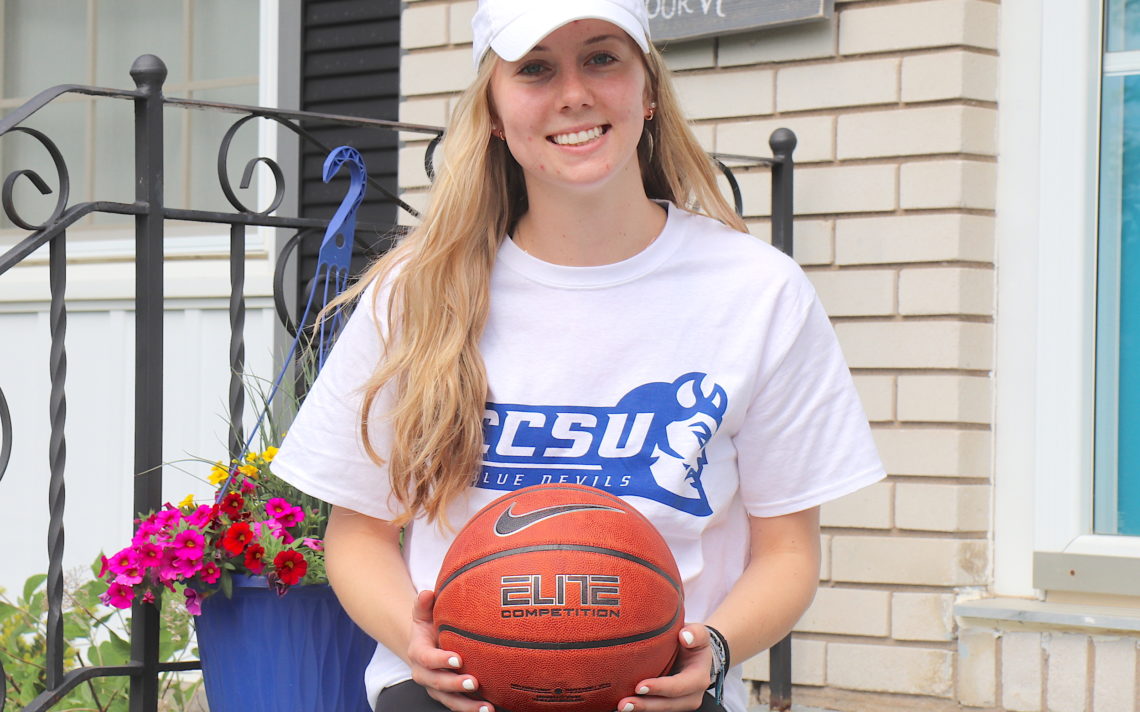 Sentance gets her exclamation mark

For as long as the 19-year-old Thorold resident can remember, she dreamt of D1 hoops.

“It has probably been since I was seven years old when I knew what Division 1 was,” the 19-year-old Thorold resident said. “Since I started, I always wanted to play basketball in university but seeing Division 1 basketball at that age hit home with me. That is where I wanted to be.”

The 5-foot-10 guard had a devil of a time realizing those dreams despite an abundance of skill and grit.

“I have had a very unique experience the last couple of years,” the Lincoln Prep player said. “We have all experienced COVID so that also played a role in it but I also ended up hurting myself. I broke my collarbone last summer and that was my time to shine. I thought I was going to have a really successful summer, get a scholarship and go to school in September but it didn’t work out for me.”

Rather than get discouraged, Sentance persevered.

“I worked hard this year to recover and come back. I went back to Lincoln Prep because I liked it last year and it gave me a lot of opportunities and exposure.”

She helped Lincoln Prep make it to the Ontario Scholastic Basketball Association semifinals in March, but still no scholarship offer was forthcoming. Not getting the offer was a struggle.

“I love watching my friends succeed and I am super happy for them when they commit but I was always like ‘It would be so cool to experience that and I want that.’ Seeing repetitive posts about people committing and seeing schools posting I wanted my turn,” she said. “I was working hard for it and at some points I felt a bit of defeat. I wasn’t sure I wanted to do it any more but I had all my past and present coaches texting me and helping me get through it mentally. That really played a role and I probably wouldn’t have stuck with it if it wasn’t for all of them.”

In April, she went to play at a Boo Williams tournament in Hampton, Va., to showcase herself one last time to D1 schools.

“It was the last kick at the can but I knew there would be many schools there and I knew everyone would be looking. I was hoping the right school would be there at the right time, would watch me and see something in me that they liked and needed.”

She had been in touch with Central Connecticut for a few years because a friend of hers, Claire Sutherland-Case, had gone there but the school wasn’t in the market for a 2022 recruit.

“Then they had a couple of girls transfer that they weren’t expecting. It worked out and they reached out to me and said they were looking at my position for 2022. They asked me when I was playing and they kind of help me make my decision to go to Boo Williams,” Sentance said. “They told me if they seen me and liked me in person the opportunities could come. I knew I had to go then.”

At the tournament, a couple of other schools also reached out to her.

“All the schools were good schools with good programs and it was just a matter of whoever stepped up. It just seemed right.”

During a vacation in Florida, Central Connecticut and a few other universities stepped up.

“I had always pictured I would be with my family and make my decision with them but I was in Florida. My coaches told me to keep my phone on because coaches would be calling me. I heard that before but people get busy and they don’t call.”

She ended up getting three calls on the same day from three different schools and two of them offered her scholarships.

“To me, I was ready to end the process and just pick a school that was right for me. I didn’t want to drag it out any more months and get more frustrated in dealing with the mental game.”

Getting a scholarship offer was an amazing moment.

“I had never had anyone offer me a scholarship or say they want me so I was taken aback and I didn’t really know how to respond. I was super-excited because the school and the program is a really good fit for me. I was trying to contain myself because I was out in public.”

She told her boyfriend, TJ Hurley, the news. Hurley recently committed to play basketball for Vermont.

“He started jumping up and down and he was super excited.”

She will head to Connecticut July 27.

“They have sent me programs to follow for the summer and on certain days I have certain things to do.”

She won’t be playing any games this summer.

“I am not going to take a chance at getting another injury. I am training by myself and in groups.”

The mental break from games will be nice.

“I have never really stopped and it has been full on for the last couple of years.”

She has already received advice from cousin, Sam Keltos, a former D1 player.

“I am a very competitive person and I asked her about the competition level and whether it would satisfy me. She had an unfortunate coaching situation but she loved it.”

Sentance has realistic goals for her first year of D1 ball.

“There are certain freshman in the NCAA that deserve to start because they are super good. A lot of people expect to start because of how good they were in high school but from what I have heard it is dramatically different and everything changes. People can be four years older than you instead of you being the oldest. I am just looking forward to learning from my coaches and everyone on the team and getting as much playing time as I can no matter if I eventually start sometime during the year or get five minutes a game. I want to show what I can do.”

Sentance acknowledges she would never have made it this far without the support and guidance from her coaches. Her list of thank yous is long and includes Mike Pullar, Trevor Capra, her mom Sue Sentance, Jen Caughill, Don Larman, Kate Harpur, Joel Whitty, her uncle Frank Keltos, Richard Nurse, Gina Steinauer, Drew Smillie and Mihai Raducanu.