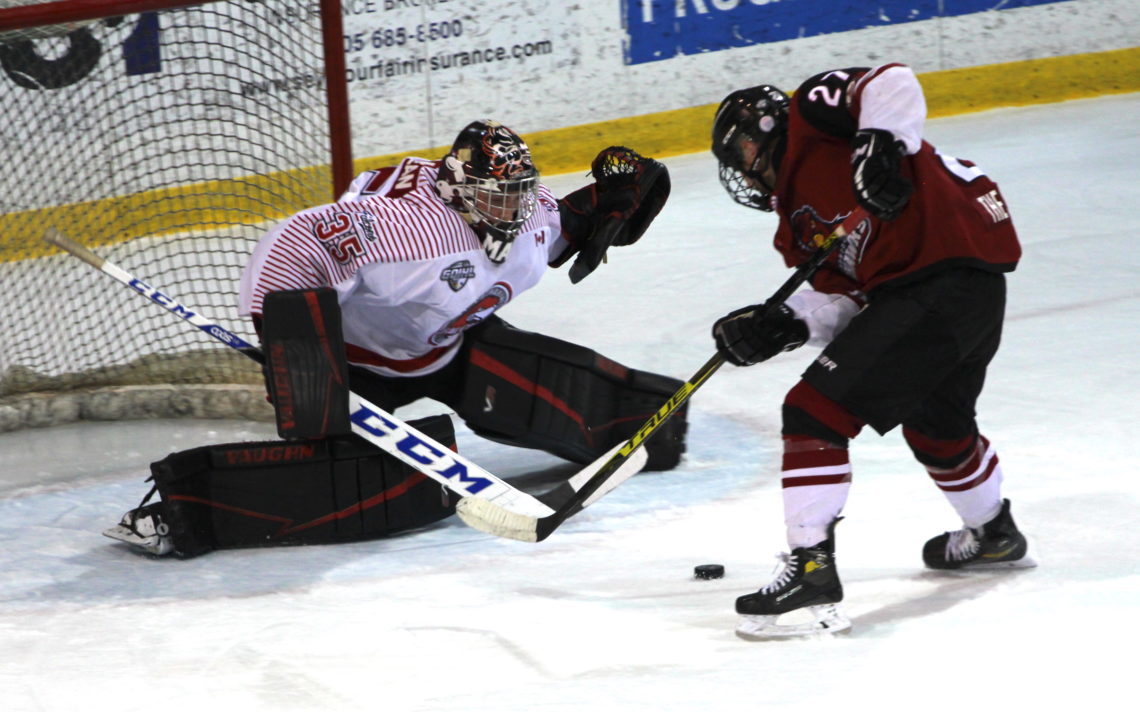 Andrew MacLean figured it was time to stop leading the nomad life of a hockey player and put down some roots.

The 20-year-old goaltender moved several times in the last few seasons, playing on three teams in the Ontario Hockey League before settling with the St. Catharines Falcons for his last year of junior eligibility.

MacLean, fresh off helping the Falcons to a Sutherland Cup provincial junior B championship, was looking for a place to continue to play while beginning his post-secondary education.

Enter Brock University, which had the program (sports management) the Michigan native was looking for and had expressed interest in the former Niagara IceDog.

“I thought (of Brock) all year since they were right here in the area,” MacLean said. “I saw the school a lot driving around and knew a couple of the guys who moved on from other places and were now at Brock.” 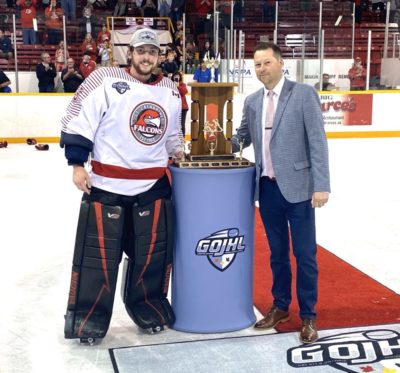 “It kicked off at the end of playoffs. Everything got moving and that kind of led me to make the decision,” MacLean said. “It was a good spot to be and it was a good program.

“I’ve made a lot of friends and I didn’t need to go somewhere else and start new.”

MacLean, who played for Owen Sound and Oshawa before landing with the IceDogs, said it was tough moving around so much.

“I’ve been bounced around. I was on three different teams in the OHL and it was always starting something new,” he said. “You go and the only people you know are you billet family and your teammates. Outside of that, you didn’t know anybody.”

MacLean has made friends away from the rink in Niagara which also helped him with his decision.

“If I were to take the hockey aspect out of it, I’ve got a life here in Niagara too and friends,” he said. “The town is nice and I don’t need my phone anymore to know where I’m going.”

MacLean also didn’t want to give the impression he in a hurry to hit the road after the Falcons just completed such a memorable season.

“Everybody knows the Falcons have won. Keep the culture going. Just don’t win and leave,” he said.

MacLean joins a crowded crease at Brock which includes former OHL netminder Aidan Hughes, who also spent a season with the Caledonia Corvairs.

“They presented it that the spot is there,” MacLean said. “Somebody has to take it and they’re confident I can come in and take them that next step further, deeper than they were last year. That was my mindset with the Falcons too. I’m coming in to win.

“I still have to work for that ice time. I played with Aiden Hughes in Oshawa and he’s a good goalie. It will be a competitive spot.”

MacLean feels his time with the Falcons where he played 54 games between the regular season and the playoffs and registered 15 shutouts will do nothing but help him going forward.

“I was never a practice goalie,” he said. “It was always games where I did better. Training and shots gets you better but real games and in-game situations and scenarios and being able to play games was a big part in being able to develop.”

“Mac deserves all his success and more,” Bielby said. “Right from training camp, Mac was dedicated towards getting better and having a winning season. He put the work in, day in and day out. Rather than take his OHL demotion and sulk, he embraced a new opportunity and made the most of it. As a result he has now opened another door for himself.

“I am already excited to see him play at Brock next year. He’s a winner on the ice, and a solid young man off the ice. We wish him the best and will be forever thankful for the role he played in helping us win a Sutherland Cup. We now have a memory that will last a lifetime, and Mac played a big role in creating that memory.”