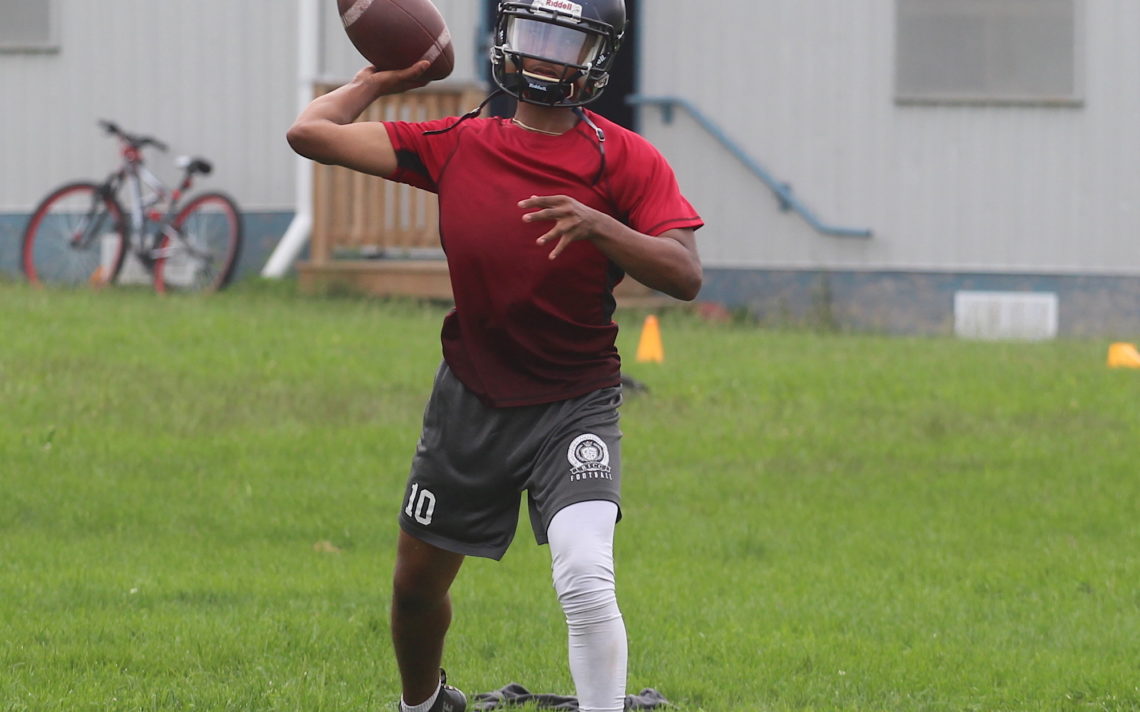 As the head coach of the St. Francis Phoenix football team, Sean Jones had to scheme to stop Blessed Trinity quarterback Xavier Hamidu.

“He’s an athletic and mobile quarterback and I know what he is capable of doing,” he said. “It is nice to have him on my side of the ball this year.”

Jones, who took a job at Blessed Trinity this fall, now has the pleasure of serving as Hamidu’s head coach. A few hours before the start of the Thunder’s practice Monday, head coach Mark Antonelli learned he had landed a full-time teaching job at Saint Paul and would soon be joining the Patriots coaching staff under Rick Oreskovich.

“It wasn’t what I was expecting come into a new school,” Jones said. “I wasn’t expecting to take the reins right away, but it is what it is.”

He’s thrilled to take charge of a program with a lot of potential.

“I”m very excited,” he said. “For me, it is a nice move. It’s a bigger school, there is more kids to work with and it’s a better situation to compete in ways I haven’t been able to the last couple of years.”

Jones coached for 12 years at St. Francis. He and Gord Barber shared the coaching duties for 11 years and Jones took over as head coach in 2017. Jones and Barber helped the Phoenix punch above their weight class in most years.

“It was tough and this year is going to be a learning experience, for sure,” Jones said.

Looking at his new team Monday, he was pretty happy with what he saw.

“There’s a lot of athletes and there’s good numbers; things that I am not accustomed to,” he said. “From here, we will just try to sort out the pieces.”

One of the pieces that won’t need to be sorted out is at quarterback, where Hamidu will be a fixture.

“His mobility was the biggest issue for us facing him last year,” Jones said. “Our biggest concern was not letting him get loose and get free. He creates a lot of matchup problems because of the multitude of things that he can do with his feet and his arm.”

The 18-year-old Hamidu is in his third year at quarterback at Blessed Trinity. He led the juniors to a berth in the Southern Ontario Secondary Schools Association Bowl  and last year guided the senior squad to a spot in the Niagara Catholic Athletic Association final. Blessed Trinity fell 42-22 to eventual SOSSA champion Notre Dame in that game.

“The whole atmosphere is different this year,” the 5-foot-9 160-pounder said. “We have a lot of new guys coming up from junior and a lot of new talent. We are excited to expose all that talent that we are getting.”

The 12B student also feels the Thunder has a strong cast of returning players.

As for himself, he is motivated and ready after a summer of working hard.

“It’s funny to go back and see how we were when we were little kids,” he said. “It has helped me become a better leader. You know how to teach little kids and it will help to do it with the peers around me.”

Antonelli likes what the experience did for his now ex-quarterback.

“It was a big show of responsibility and a big show of maturity,” he said.  “I was proud of him for doing it and that type of leadership quality will help him excel in the future.”