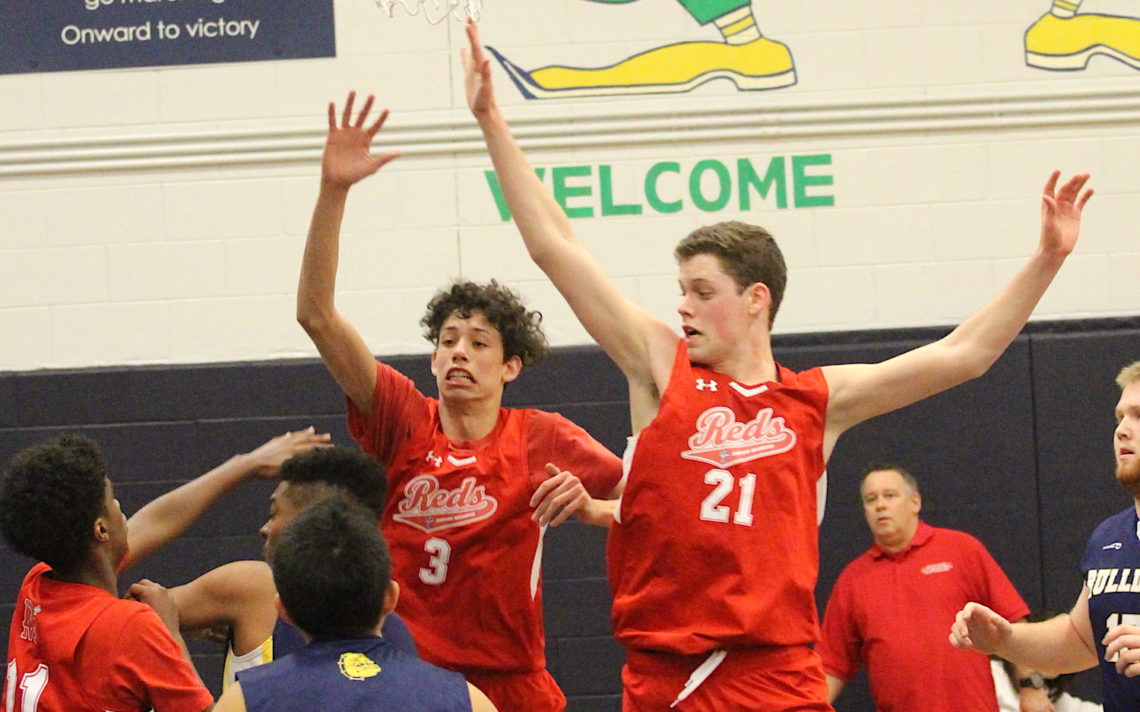 Trailing by as much as 17 points in the second half Thursday night to the Sir Winston Churchill Bulldogs, the Denis Morris Reds rallied to record a 63-58 victory in the championship quarter-finals of the 63rd Annual Welland Tribune Basketball Tournament.

“It was a real nice win for our program,” Reds head coach Randy Conlon said. “I finished the game with two Grade 10s and three Grade 11s on the floor and I don’t think they know any better.”

The Reds trailed by 14 points with two minutes left in the third quarter. During a timeout, Conlon reminded his team the game wasn’t over.

“We had to get stops,” he said. “Without overstating the obvious, we started making shots.

“Basketball is a game of offence and we started making shots. But it took us a long time.”

One of the young players who came up big for the Reds was Grade 11 point guard Zubeer Liban. With his team trailing 53-50 with less than four minutes left in the game, Liban hit a three to tie the game. He then hit a couple free throws to give his team a 55-53 lead and followed that up with a nice reverse layup that would give the Reds a four-point lead they would never relinquish.

“He didn’t score at all yesterday and everyone else on the team scored,” Conlon said. “He’s very unselfish but if he sees gaps he has the green light with me.”

Conlon was certainly impressed with the play of Liban Thursday, especially during his personal 7-0 run in the fourth quarter.

Shooting is not something the six footer worries about.

“I’m more of a leader. I don’t have to go out there and score but I have to keep everyone composed and keep them in the game so we don’t lose our focus,” said Liban, who had 15 points in Thursday’s victory.

That is important on a young but confident group.

“We always pick each other up whenever we are down,” Liban said. “We never get down on each other and everybody pumps each other up. That is a big reason for our success.

The travel player with the St. Catharines Rebels never lost faith in his team Thursday.

“It was total determination,” he said. “We never gave up and even if the scoreboard said otherwise, our teammates and our bench players kept telling us to never give up. ”

Churchill rallied from a pair of nine-point deficits in the first half but couldn’t conjure up the same magic in the second half.

“That was a tough game,” Churchill head coach Greg Loucks said. “I thought we played well to get the lead in the third quarter and then we played so poorly in the last quarter.”

When the teams last met, Churchill won by 12 at the Centennial tournament.

“They have improved a lot since the beginning of the year, but, for us, it was a frustrating game to watch,” Loucks said. “We turned over the ball, we missed a lot of shots late in the game and they we got a little loose maintaining possession. We were launching threes from everywhere.”

Denis Morris advances to play Centennial in the championship quarter-finals Friday at 6:30 p.m. at Notre Dame.

Dusan Krkljus netted 11 points to lead the Saint Michael Mustangs to a 50-26 victory Thursday over the Holy Cross Raiders in the consolation quarter-finals of the Tribune tourney. 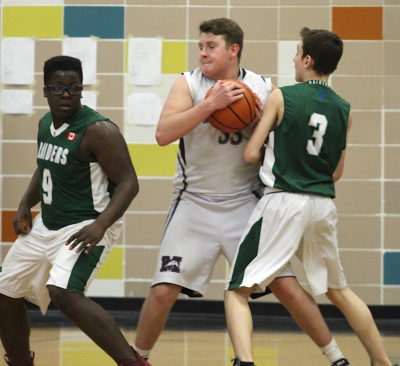 Saint Michael advances to the consolation semifinals Friday at 5 p.m. at Notre Dame versus Eden.