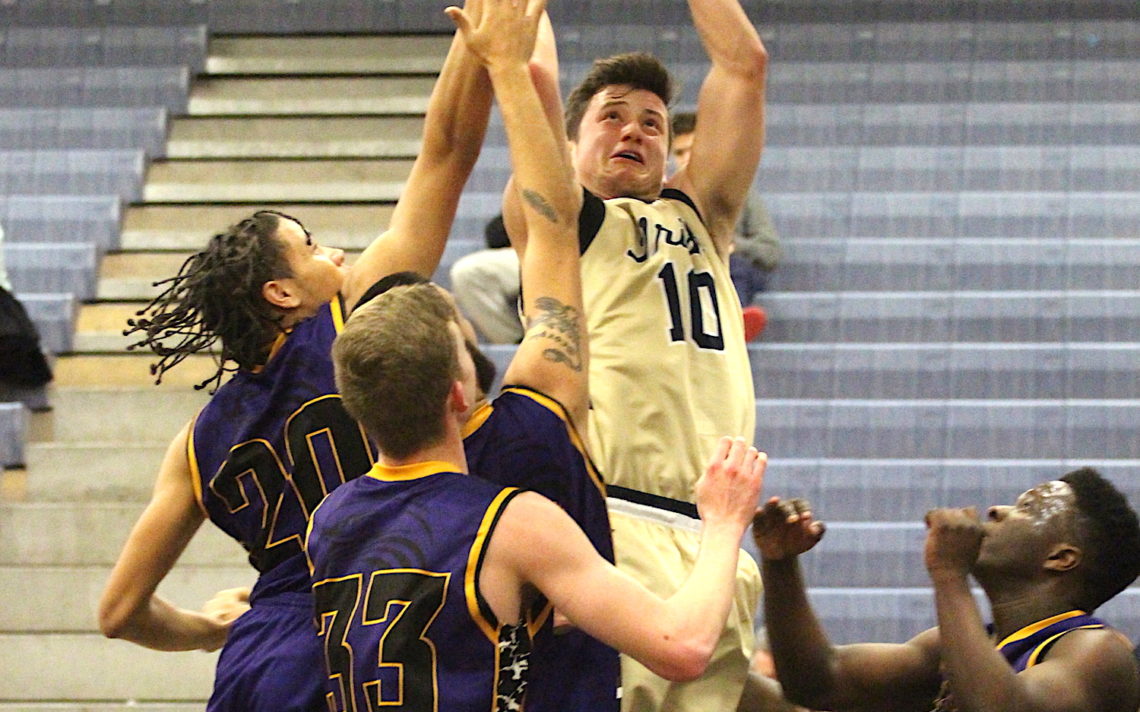 From the gridiron to the hardwood

Jonah Gruarin was a late arrival to the basketball court this fall.

The 12B student was a deep-threat receiver on the Notre Dame senior football team that captured the Southern Ontario Secondary Schools Association Bowl and made it all the way to an Ontario Federation of School Athletic Associations Bowl.

“It was tough,” the 18-year-old said. “We usually start in early November and since football went really late, I didn’t start until December. It was a little difficult to go back and forth.”

He brought his football mentality to the basketball court.

“I am a little bit more aggressive and it helps sometimes,” he said Thursday night, after scoring 15 points to lead the Fighting Irish to a 80-48 victory over the Thorold Golden Eagles in the quarter-finals of the 63rd Annual Welland Tribune Basketball Tournament.

“He is one of the toughest guys in the whole school and you know he’s a gamer,” he said. “When things are on the line, he’s going to work hard, he’s going to defend and he is going to do all the little things you need to do to win.

“That’s why he is a great basketball player and a great football player.”

The 6-foot-1 guard shrugs off his coach’s praise.

“I don’t know,” he said. “I don’t take much, I am really level-headed and I try my best to stay focused.”

His football training has lots of benefits to his basketball game.

“With football, we do a lot of cardio and it helps with my toughness taking charges and going into the paint.”

Gruarin had some interest from Ontario universities wanting him to play football, but he feels he is done with football.

“I am planning to go to Brock and I am not sure I will be playing any sports or not,” he said. “I want to play sports in university and not full-on football.”

And while football has garnered him a lot of attention this fall, basketball has always been his passion.

“I played basketball my whole life and then in Grade 11 I started playing football,” he said. “That became a big interest but basketball has been my main sport for my whole life.”

He played with the Welland Warriors until Grade 8 when he moved over to play with Blessed Sacrament and helped his team place fourth in Division 1 of the Ontario Basketball Association championships.

Thorold trailed 11-7 after the first quarter and could have easy held the lead if they hadn’t missed a number of easy baskets. Notre Dame then pulled away in the second quarter and never looked back.

“It was a great way to come back from the Christmas break; the intensity level,” Thorold head coach John Kwiatkowski said. “You preach it and you preach it when you play upper-echelon teams.

“We take a lot more from a loss than a win and after games like this I find we play so much better because they realize what it takes to play at this level.”

Gallagher was impressed with how Thorold competed.

“They played us really hard and we were a little bit sloppy early,” he said. “They hung tough, we didn’t make shots and they made us work harder that we would have liked to tonight.”

It was good for Notre Dame to be tested but the downside of that is key players were required to play more minutes than Gallagher would have liked in a tournament that teams need to win four games in four nights to take home the title.

“We certainly didn’t need a night off but I would have liked to get guys in earlier than we did tonight and save some of the other guys,” he said.

Ryan Gilbert and Charlie Edgar netted 18 points each Thursday to lead the Eden Flyers to a 52-48 victory over the Westlane Spartans in Tribune consolation quarter-final action.

Also scoring for the Flyers were Josh Robins (10), Micah Nieuwets (4) and Trevor Head (2).

Eden advances to the consolation semifinals Friday at 5 p.m. at Notre Dame versus Saint Michael.