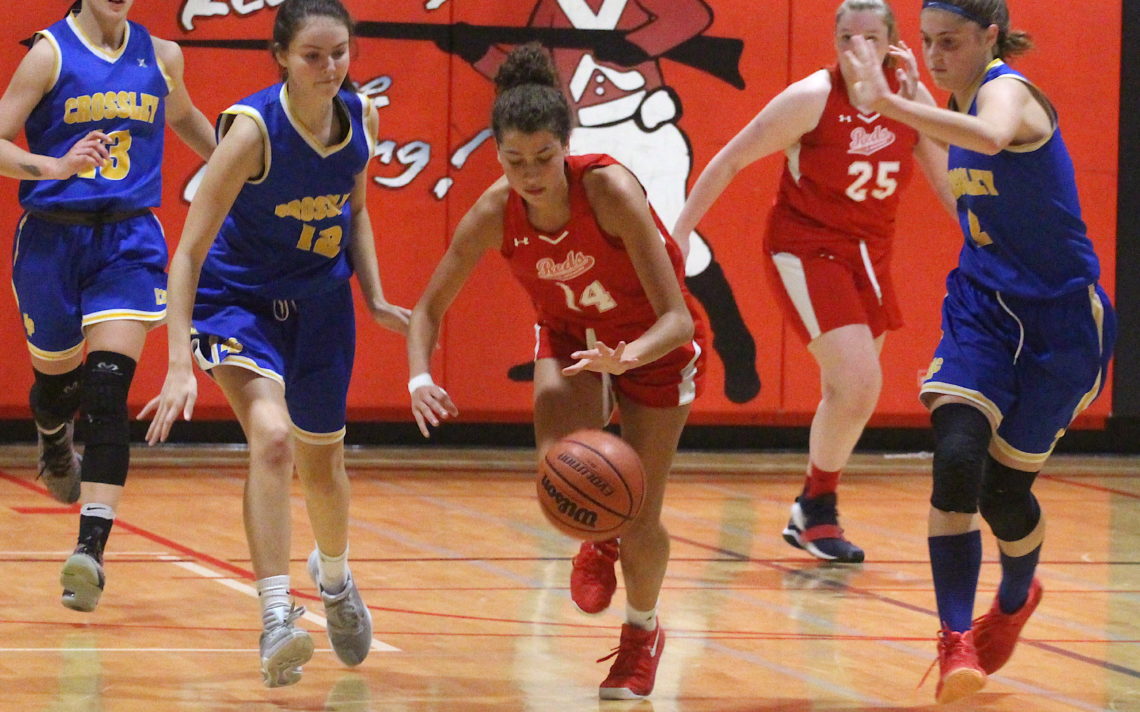 Lexxus Bell has no problem with the spotlight.

The 17-year-old, Grade 12 student was front and centre once again Thursday for the Denis Morris Reds.

Bell poured in 22 points and also distributed the ball effectively when she wasn’t scoring herself as the Reds edged the E.L. Crossley Cyclone 39-36 in a championship round semifinal game at The First BPSN Girls Basketball Tournament at Governor Simcoe.

The Reds will be face off versus the No. 1 seed Sir Winston Churchill Bulldogs Friday at 7 p.m. at Simcoe for all the marbles.

Bell, who collected 48 points in DM’s two wins Tuesday and Wednesday, is well aware not only do the Reds count on her to lead their offence, but she is also Public Enemy No. 1 as far as the opposition is concerned.

“It’s pretty difficult but I come into the game knowing that,” she said. “It’s what we practice but I have my teammates to help me.”

Bell was hot early with seven points in the first quarter, then ran into foul trouble was forced to the bench in the second.

“Obviously, it’s pretty frustrating,” she said. “It was a little difficult. Whatever happens, happens, and you can’t do anything about it.”

Bell channeled her frustration well, pumping in 11 points in the third quarter when she finally got back on the court.

DM coach Stephanie DiMizio knew once Bell was called for her third personal foul she had to come out.

“It’s very hard for both me and her because she wants to be in the game at all times, but I know I needed her in the end when it counts so I can’t jeopardize that,” DiMizio said.

DiMizio said she relies on Bell to do much more than just score.

“It’s an amazing thing to have another coach on the floor who knows the game and is a leader and directs the girls,” she said.

The Reds led 20-19 at the half and 33-28 after three quarters. The Cyclone kept it close and had several chances to cut into the lead, but came up empty.

“It’s very stressful and nerve-wracking,” DiMizio said. “I told the girls at the end of the game it was a great win but they took 10 years off my life to get there, but it’s nice to come out on the winning end of that kind of game.”

Crossley coach Aaron Belding could only wonder what might have been had his charges demonstrated a bit more touch around the net.

“We needed two shots to fall,” he said. “We had a lot of in and outs and you could just see in some of the girls I normally count on for shooting their legs were tired and they were just a little bit short.”

DiMizio realizes the Bulldogs will be formidable opponents.

“It’s very exciting because we haven’t been in the championship game before so this is a big accomplishment for us just to get there,” she said. “Sir Winston is going to be a tough challenge but we’re looking forward to the challenge.”

Mick and Angelo’s/Johnny Rocco’s/Cracker Jacks Players of the Game: DM’s Lexxus Bell with a game-high 22 points and Crossley’s Sydney Grummet with 12 points and exceptional work on the boards.