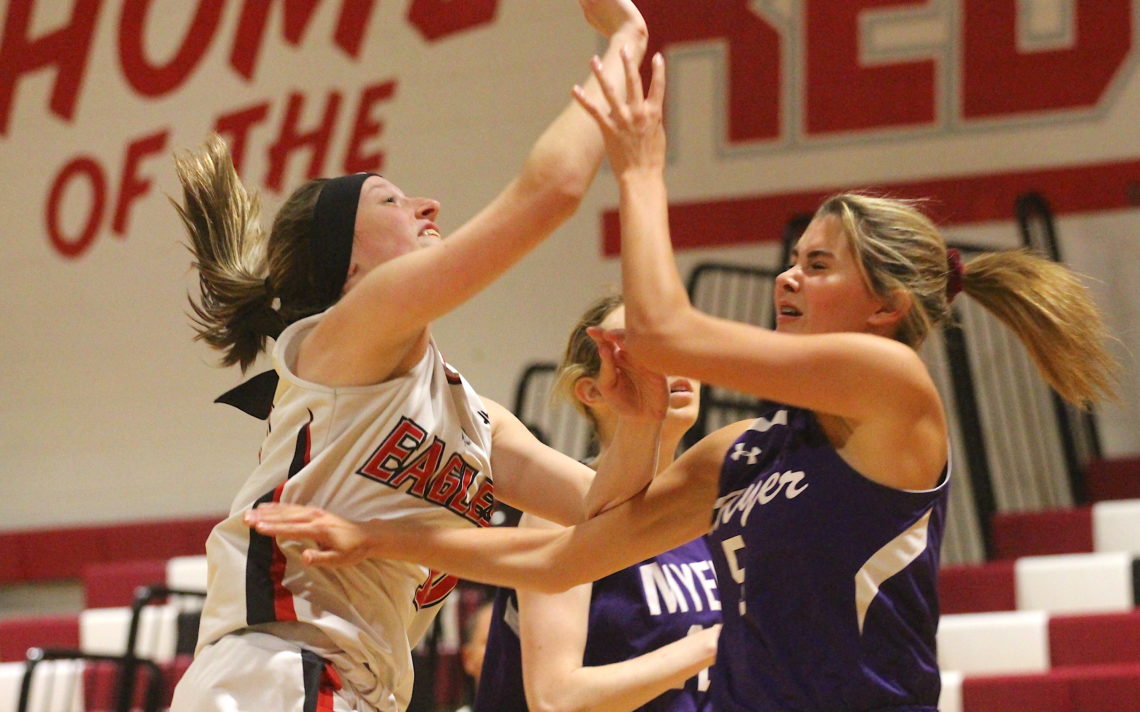 Molly Taylor is a diamond in the rough.

The 17-year-old, Grade 12 student has the raw tools to have a career at the next level and is working hard to refine her game.

Taylor led all scorers with 19 as the A.N. Myer Marauders topped the Grimsby Eagles 50-19 in a consolation semifinal game Thursday at The First BPSN Girls Basketball Tournament.

“I kind of control the floor and make sure everyone is staying positive and be in a leadership role and get points,” Taylor said of her role with the Marauders.

Myer coach Paul Grummett feels Taylor has the makings of a solid player at the post-secondary level.

“She’s athletic and has good basketball IQ and court awareness,” he said. “She understands the game through her years of coaching through JUEL and JUEL Prep.

Grummet is trying to get Taylor to be more aggressive with the ball.

“She’s been in a power forward position for years,” he said. “This year I’m trying to give her the ball so she can create and make her go and get that attacking mentality. I’m trying to help her build that up so she can use it at the next level.”

He would also like to she her hit the weights.

“She might have to get more of a stronger body and fill out, more muscle. That way she can compete with the girls at the next level.”

Taylor, who has an Ontario Basketball Association Division 1 championship to her credit with the Niagara Rangers, originally was looking to play south of the border but is now thinking of staying in Ontario.

“I want to obviously play somewhere else, somewhere close to home like Guelph,” she said.

Taylor plans to major in nursing or teaching.

The Marauders jumped out to an early lead and never looked back, holding the Eagles to only six points at the half.

Myer now takes on Centennial for the consolation title Friday at 5:30 p.m.

“I wanted to compete at all levels, but it’s very tough,” Grummett said. “I’m very young in the backcourt and inexperienced and it shows. We’re a work in progress still.

“Did I want to take this route? No. Am I content with it? We’ll talk tomorrow after the game.”

The Eagles appreciated the opportunity to get some experience in a tournament setting.

“We always like coming to the tournament and playing,” Grimsby coach Tammy Strongitharm said. “This year we had challenges getting players to come out to play.”

Mick and Angelo’s/Johnny Rocco’s/Cracker Jacks Players of the Game: Myer’s Molly Taylor with 19 and Grimsby’s Aria Hall with six.