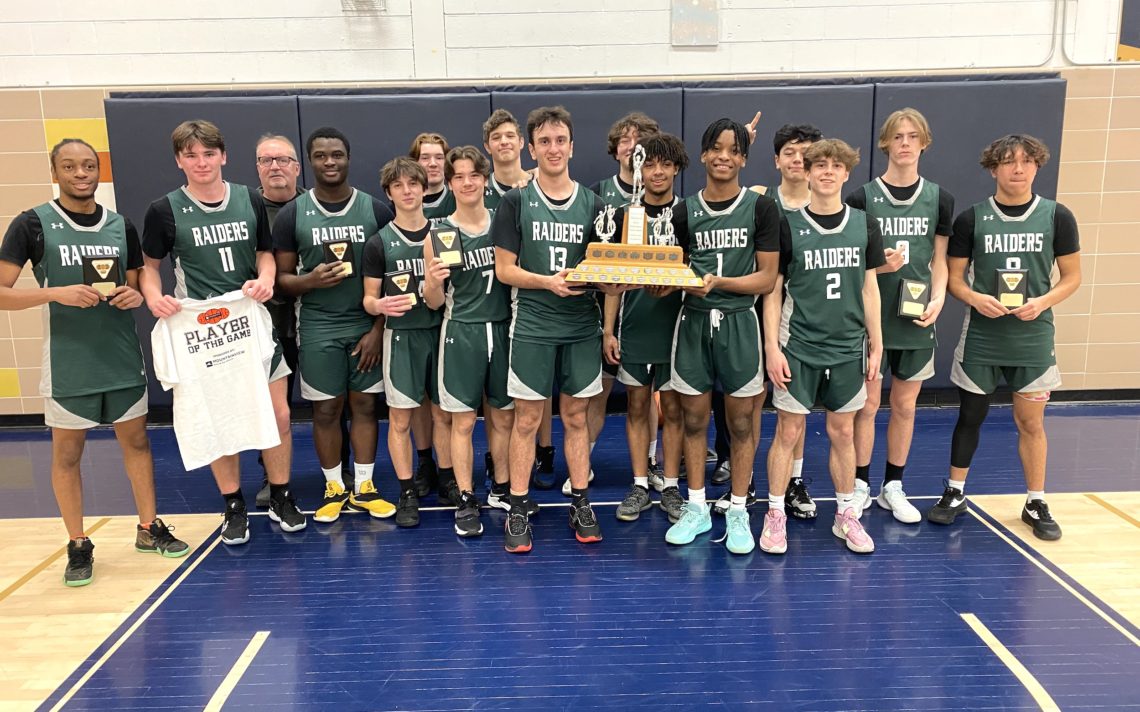 The Holy Cross Raiders wrote their name into the history books Saturday night at Notre Dame.

The Raiders topped the Saint Paul Patriots 51-38 to capture the consolation title at the 66th Annual Welland Tribune Basketball Tournament. It is the first time the school has won a championship on either side of the draw at the tournament.

“This is a moment we’ve been waiting for,” Holy Cross forward Arin Sayegh said. “We were looking for this. We can’t get the smiles off our faces.”

Forward Owen Bradford Andrew, who was named Mountainview Building Group Player of the Game for the Raiders, felt the championship was even sweeter considering the Raiders lost in the consolation final of the Standard Tournament last month.

“It’s really good to come back and win a consolation final,” he said. “We came in and really wanted to win. Getting it means everything to us. We’re finally known as a basketball school a little bit now. We never were.”

Coach Austin Anderson, subbing for the vacationing Randy Conlon, feels the victory could be a benchmark for the school going forward.

“Holy Cross obviously isn’t known as a basketball-type school,” he said. “When we play up to our potential, we can at least give a game to any team in this region and hopefully these guys can have that confidence now and we have a trophy.”

Conlon even got in on the act, texting congratulations from some tropical paradise.

“I’m really happy for the boys and Austin. He’s obviously done a great job with them,” Conlon said.

The Raiders won their title with defence, amazingly holding the Pats to no points in the first quarter and just six at the half.

“That was the mindset we went into it with,” Sayegh added. “Defence is our No. 1 thing to focus on. That’s how we try to win games.

“It’s everyone off the bench too yelling defence. That’s how we started it. It gets the energy up.”

“They have a couple of shooters and especially in first half, just playing aggressively,” he said. “Nobody let off. Everybody contributed to defence today.

“That’s what we’re good at. When our defence is doing well, we start picking up offensively. It just felt good to see the scoreboard with not a lot of points on it.”

Anderson felt if the Raiders were going to win, it would be on the strength of their defence.

“I said before the game I would be surprised if we didn’t hold them under 50 and those guys just came out and wanted to work hard,” he said. “It was awesome to watch.”

“It was a big mountain to climb,” he said. “The initial pause in scoring kind of carried on for the whole game.”

Doodeman said the Pats attempted to regroup at the half and did put together a more effective final 16 minutes.

“We just talked about nerves might be a thing and we might not be able to get all the buckets we get on a normal day, but we’ve got to work harder than the other team because they outworked us in the first half.”