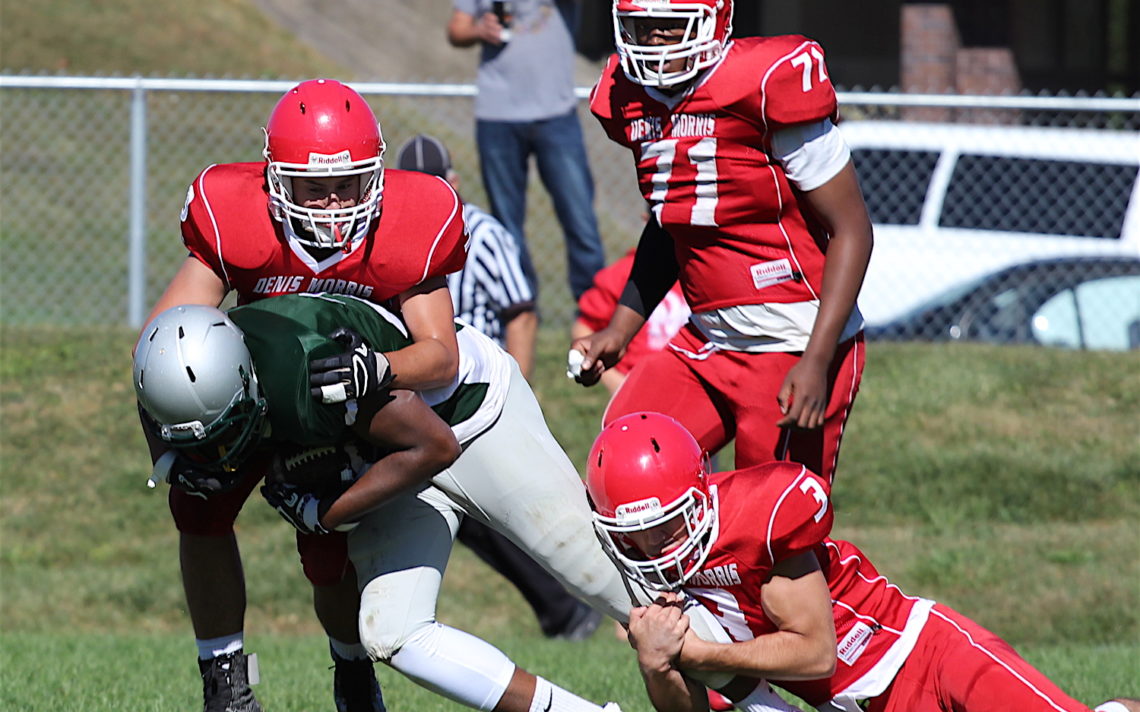 Raiders find a running back

When Tinashe Dandato runs into people on the football field, the sound of contact can be heard clearly on the sidelines.

The 6-foot-1, 220-pound Holy Cross running back, who scored two rushing majors in a 28-21 loss to Denis Morris Thursday, was miscast early in his football career but has found a home on the offensive side of the ball.

“He was with us in Grade 10 last year and this year we realized we had him on the wrong side of the ball and that he should be our runner,” Holy Cross head coach Jim Craig said. Last season, Dandato played linebacker for the Raiders, but made a practice impression that carried over to this year.

“In some of our practice drills we found he was a very elusive runner,” Craig said. “We couldn’t find him, we couldn’t get ahold of him and we thought ‘Geez, we should have this guy on the other side of the ball. ’ ”

“He’s the kind of runner that is going to hit you,” Craig said. “You’re not going to hit him and that helps him get those extra couple of yards.”

“I always wanted to run the ball and I’ve always been hoping for the chance,” he said. “I’m more of an aggressive player. I like to hit and I love fighting for my yards.”

In addition to football, the Grade 11 student also completes in basketball and track for Holy Cross, making in to the Ontario Federation of School Athletic Associations regional track and field meet in the 100-metre hurdles.

Holy Cross fell to 0-3 with the loss but Craig isn’t getting discouraged. His team has been in every game, losing Thursday’s game in the final minutes on a DM touchdown.

“We’re competing every game and we’re hoping not to get any more moral victories and get an actual W next week.”

Craig described the game as a lot of fun. “We were in a ball game again and we enjoyed coming here. We haven’t been here in a long time.”

With the win, the defending NCAA champion Reds improved to 2-1 and will play the top teams from the South Division in crossover games during the next two weeks.

“They played very hard, our hats are off to them and they gave our kids a great run for their money,” Reds head coach Rob Battista said. “It was a good clean game and hopefully our kids will learn from it.”

With a young squad, the Reds’ goal is to get better every week.

The Reds will find out shortly who they play in the crossover games. Blessed Trinity finished first in the North Division at 3-0 following a forfeit victory over St. Francis Thursday.

“We want to get better every game and hopefully we can peak in the playoffs.” Battista said.

The Westlane Spartans broke open a close game with a pair of late touchdowns to defeat the Sir Winston Churchill Bulldogs 19-6.

The win improved Westlane’s record to 2-1 while the Bulldogs dropped to 1-2.

Westlane coach Jason Babony was thrilled with his club’s performance.

“It was a huge monkey off our back to come in here and win against a tough team,” Babony said. “I was really satisfied. Pulling away in the fourth quarter like that shows our kids have character and I can really be proud of that.”

The Spartans opened the scoring when Josh Bigelow recovered a fumble in the end zone for a touchdown.

The game was tied 6-6 after three quarters before the Spartans went up 7-6 on a single by Jon Fitt on a 40-yard punt through the end zone with 7:20 to play.

Isiah Maye then added an 80-yard run for a touchdown before Darcy MacIsaac hauled in a 32-yard touchdown pass from quarterback Josh Thorpe to conclude the scoring.

The Bulldogs, meanwhile, struggled on offence.

“Our offence was not firing on any of the cylinders today,” Churchill coach Peter Perron said. “Our defence played exceptionally well but our offence has to come to practice next week with more intensity because we sputtered. There were moments when we shone and scored and other times where it just didn’t happen for us. It’s something we have to work on.”

With files from Bill Potrecz.

BPSN Star of the Game: Denis Morris’ Ben Abel with two fumble recoveries and a sack.