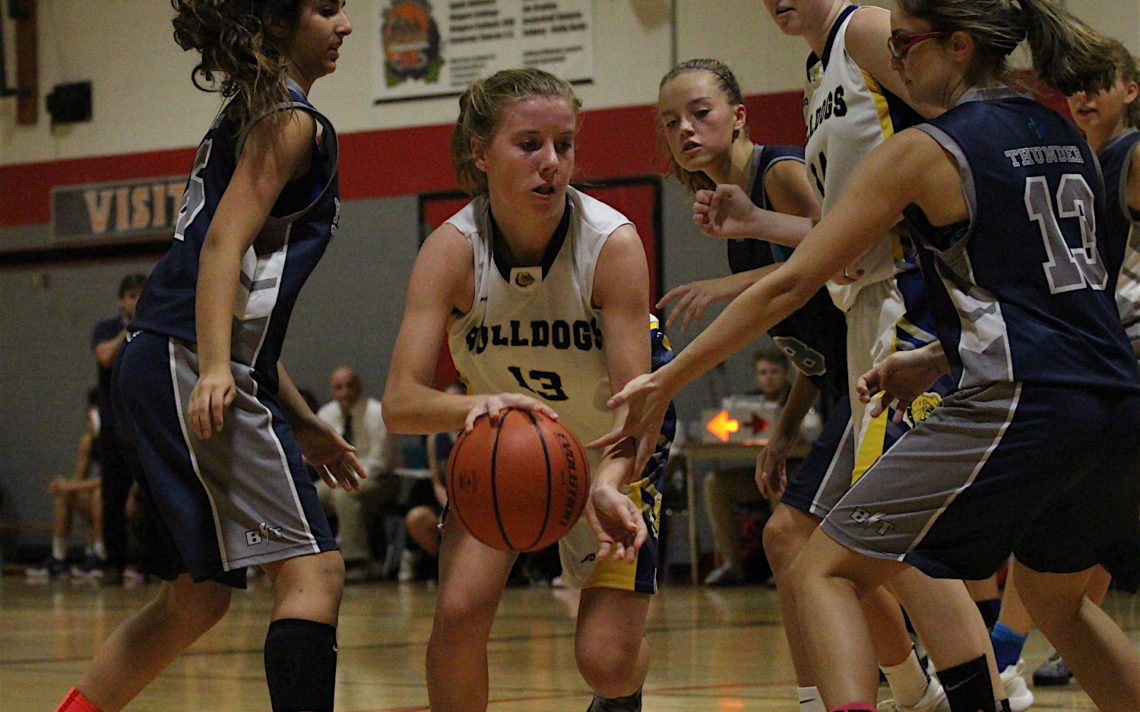 Ally Sentance  dribbles past some Blessed Trinity defenders Thursday night in the semifinals of the Standard Girls Basketball Tournament. Photo by BERNIE PUCHALSKI

She may have grown a lot and she’s obviously more skilled, but Kaley DeMont plays the same style she did in Grade 3 while a member of the Pelham Panthers travel team.

“That’s just what I do,” the Grade 10 student said. “I always tried to work really hard and I knew I had to score when my other teammates weren’t scoring. I had to pick it up every time and I went from there.”

And like a true scorer, the 15-year-old doesn’t let a few misses bother her.

“My coach always tells me to keep shooting it until you start making it and if you miss, that’s OK.”

DeMont missed a few shots early Thursday before catching fire to net 20 points and lead the Sir Winston Churchill Bulldogs to a 53-51 victory over the Blessed Trinity Thunder in the championship semifinals of the Standard Girls Basketball Tournament.

“What can you say about her?” Churchill coach Frank Keltos said. “Every shot she puts up you swear they are going in. Just let them go, it’s fun.”

After playing JUEL Prep last season, DeMont has moved up to this year’s Niagara JUEL squad coached by Keltos.

“I will need to focus more,” the 5-foot-6 guard said. “I know I’m a younger player and when I play the older kids, I will get stronger mentally.”

Keltos says DeMont will need to improve her movement without the ball to take the next step in her basketball progression.

“The great players move without the ball and that’s how they get themselves open,” he said. “If they get open for shots, people will find them.”

Churchill’s narrow victory over Blessed Trinity came on a last-second basket by Grade 9 player Janee Harrison. The game was one of the best Standard tournament games in recent memory.

Keltos was thrilled he finally saw what he was looking for all season from his team.

“We finally executed a play,” he said. “Maybe we are going to find the execution of plays and that’s moment we see that gets us to the next level.”

Then again, its high school sports and there are no certainties at any level or any sport.

DeMont wasn’t brimming with confidence as the game reached its conclusion.

“It was really scary,” she said. “I didn’t know what was going to happen and I thought we were going to lose.”

Both DeMont and Grade 9 guard Ally Sentance were in a bit of foul trouble but managed to play through it.

DeMont has been waiting a long time to reunite in the back court with Sentance in high school. The pair started together on an under-10 team in Pelham playing a year up and one year later they were on a Panthers squad that lost in a tiebreaker for a chance to play in the medal round of Division 1 at the OBAs. Last year, the two were on the Niagara JUEL Prep squad that won a silver medal.

“I’ve been waiting a long time and I was really excited for this game,” DeMont said. “We’ve been playing together for so long and she’s my best friend too.”