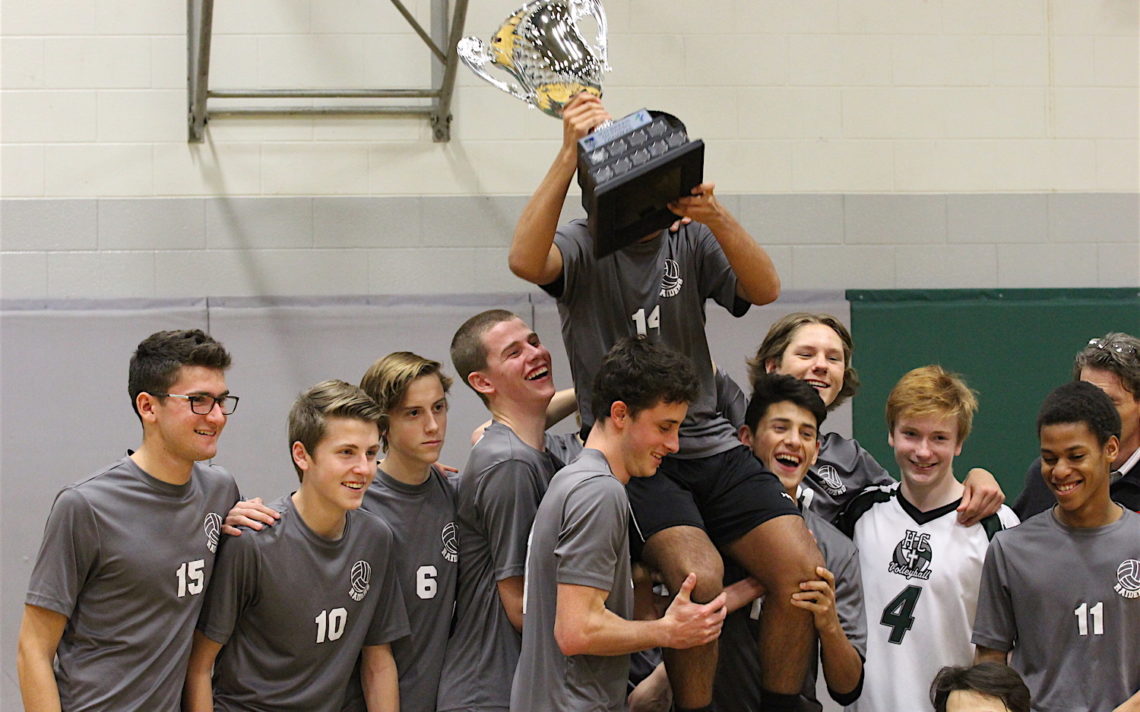 The Holy Cross Raiders’ quest for a Niagara Catholic Athletic Association senior boys volleyball championship was sparked by a disappointing loss to the St. Francis Phoenix in last year’s semifinals.

“Last year was a really good team but unfortunately in the semis we lost,” Raiders head coach Marc Ferretti said. “It was our crosstown rival, St. Francis, and we have it out (with them) in soccer, basketball and volleyball, you name it.

“We had some mental lapses and they just got the better of us.”

Second-year Grade 12 player Matt Ferron was still remembering that loss after helping the Raiders win the NCAA title Wednesday with a 3-0 sweep of the visiting Saint Paul Patriots.

“Some guys were goofing around and playing stupid but they smartened up and we got the win today,” the 17-year-old said.

Last year’s loss was good motivation this time around.

“We said that we wanted to get down to business and win it in straight sets,” Ferron said.

The Raiders did just that, winning easily 25-8 in the first game and then by 25-18 margins in the next two games.

“This year, everything came together, good swings, good hits and lots of communication,” Ferretti said. “I’ve had most of these kids since Grade 9 and they work very hard to earn whatever they get. I give them all the congrats because they earned them. They are a hard-working nice bunch of kids.”

“I am super proud of that kid,” Ferretti said. “He came in Grade 9 and they are all generally basketball players and athletes.  What we get is based on the hard work we put in and Matt’s a prime example.”

“He can play three different positions for me, even setter,” Ferretti said “It’s kind of rare that a tall kid like that with power wants to set but he always give a good effort.”

Ferron is a key member of the team on and off the floor.

“He’s a quiet leader and when he wants to make a statement he does,” Ferretti said.

“My No. 1 sport is basketball but I do volleyball to warm up for it,” Ferron said. “It’s good for the vertical (jump) and it helps you be quick on your feet and with reaction times.”

Holy Cross went a perfect 6-0 in regular season playing, including a 3-2 victory over the St. Francis Phoenix, before defeating St. Francis 3-2 in the semifinals. The Phoenix were the only team in the NCAA league to win a game versus the Raiders.

Saint Paul went 4-2 in regular-season play before defeating Notre Dame 3-0 in the quarter-finals and Saint Michael 3-1 in the semifinals.

Next up for the Raiders is a date versus the powerhouse Eden Flyers in next week’s overall Zone 4 championship match. Ferron is not conceding anything to last year’s provincial bronze medalists.

“I think if we can play to our maximum potential, we can win,” he said.

Basketball practice at Holy Cross has already started and Ferron is more than willing to wait if the volleyball team moves on.

“I can pretty much get right into it,” he said.