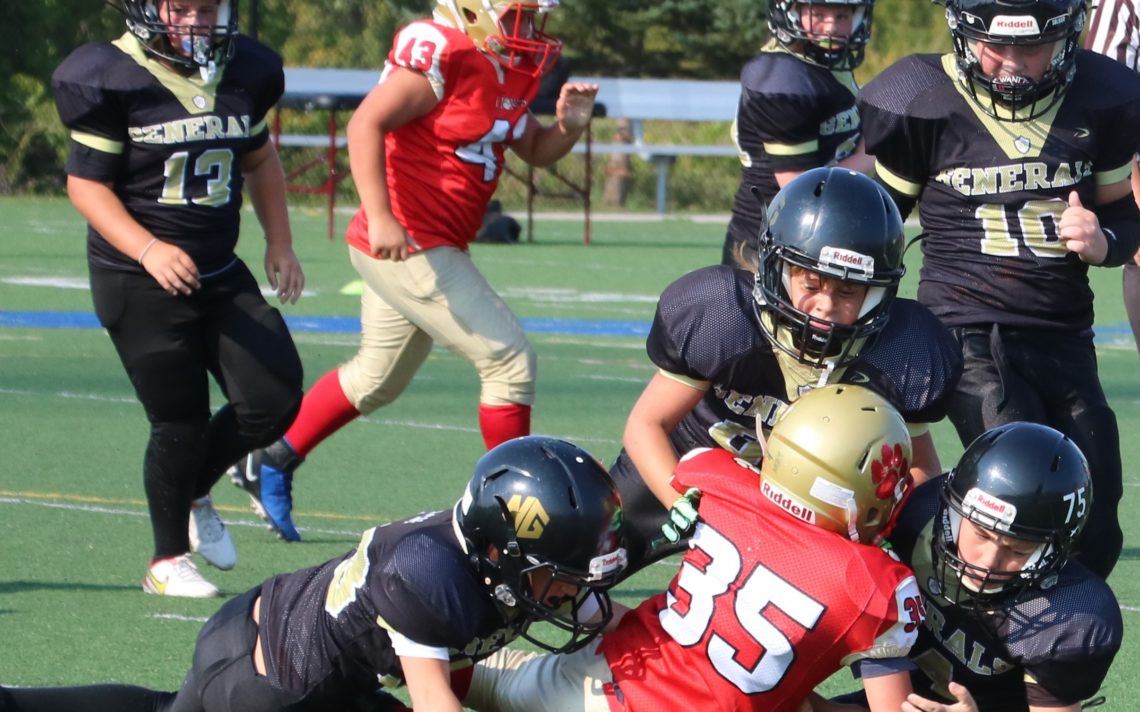 The three Niagara Generals travel football teams all opened with wins this past weekend. Photos by LINDA BOVER.

It was a perfect opening weekend of Ontario Fall Football League play for the Niagara Generals travel football program.

All 38 players on the Bantam Generals roster made a contribution in the 22-6 victory over Waterloo.

“Our offence marched the ball down the field multiple times. Luis Corredor-Reyes was running at will all over the field versus the Warriors and our offensive line held the pocket for quarterback Benji Kolodziejczak, helping him make multiple passes to our talented receivers,” Niagara coach Jeff Adams said. “With one score under our belt, the defence took over. The Generals defence had a close to perfect game only allowing one major on the day.”

Adams singled out Spencer Macrae for his play.

“He had one heck of a game with multiple tackles, sacks and forced fumbles. He was our standout player on defence.”

Macrae also contributed on the scoresheet returning a blocked punt by Jak Buckland for a major.

Hunter Grant added an offensive TD for the Generals and Corredor-Reyes had a kick return for a score.

Layken Crawford scored four touchdowns and Sawyer Grant added a single major to power Niagara to a 33-8 victory over Cambridge.

The defence played very well and put pressure on the Lions the whole game. Key plays were made by Jaxson Smith, Callum Rennie, Jake Brewster and Nevyn Ciach.

“Kids on both sides of the ball played hard and executed when they were tested by the Lions. It was a total team effort that gave the Generals the win in the season opener. All the coaches are very proud of the boys with how they performed. The team is starting to come together,” coach Cliff Black said. “The boys have a lot of potential to go all the way this year with hard work. We as coaches are all looking forward to help them achieve this goal.”

The Peewee Generals are at Cambridge this Friday.

The Atom Generals scored on seven of eight possessions to record the 57-37 victory over Waterloo.

Jorge Corredor-Reyes started the game off with a first possession touchdown run which set the tone early. He would add another major later. Also scoring a pair of TDs were Eli McLean and Jackson Lewis and Christian Lewis added a 70-yard rushing touchdown.

“The boys played hard and executed when opportunities presented themselves. The blocking is what really set the tone,” coach Andrew Lewis said. “Our offensive line was exceptional and made it easy for our guys to move the ball.”

The Generals had some key plays on defence that really kept the momentum going, including a forced fumble which was run back for a touchdown by Eli McLean.

“We had key contributions by all our guys today, however, leading the defence today was Joey Smees who was able to get behind the line of scrimmage for a few sacks and a fumble recovery,” Lewis said. “This was a total team effort with contributions from each player who stepped on the field. I am proud of each and every one of our guys. We look forward to carrying the momentum into our next game against Guelph.”