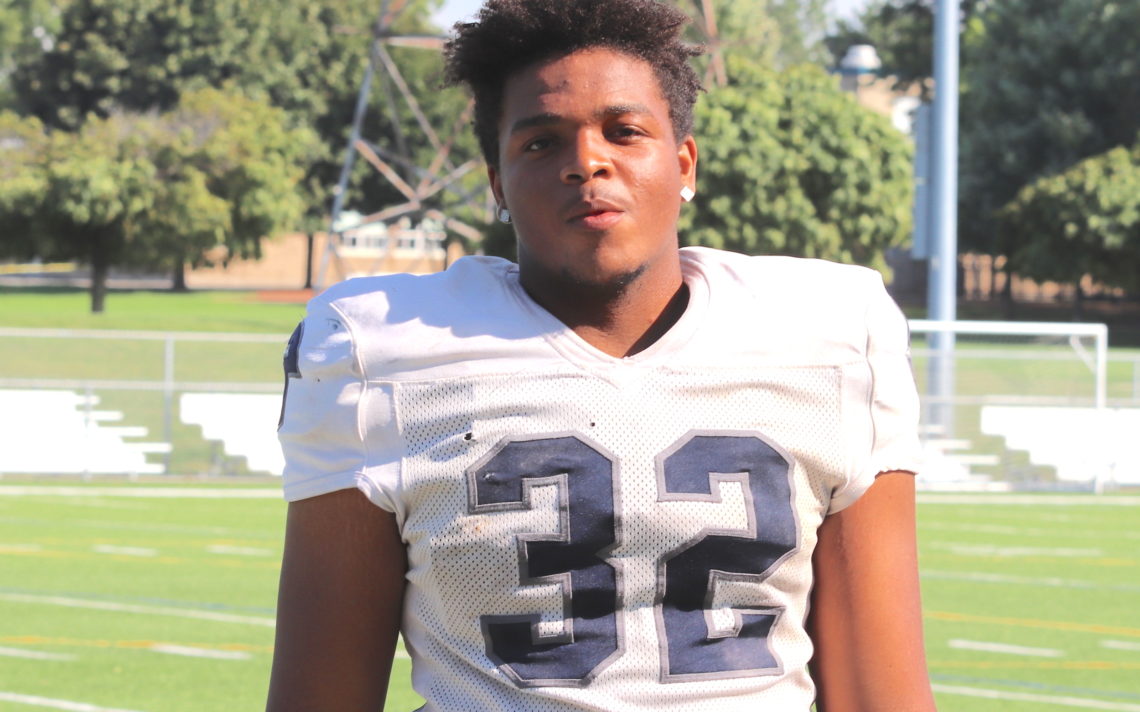 Pappin is Patriots’ go to player

Like his older brother Jarrel before him, Elijah Pappin will play a key role in the success of the Saint Paul football team.

“Elijah is our most veteran player and team leader. He is much like his older brother, tough, strong, always wants the ball and capable of making big plays,” Saint Paul head coach Rick Oreskovich said. “He is a clean, respectful and classy player, loves the game, is a great teammate and the kind of player that can play at the next level.  He is maturing and becoming a very dependable and special athlete at Saint Paul. He will be our go to guy.”

The 18-year-old Niagara Falls native will be counted on on both sides of the ball as the Patriots utilize him as a fullback and linebacker.

He is ready to tackle the challenge.

“You just have to drink a lot of water.”

The 6-foot-2 220-pounder prefers the offensive side of the ball.

“Getting touchdowns just feels better than making plays on defence,” the 12B student said.

This past summer with the Niagara Spears, Pappin saw a fair of amount of time at fullback and that will help kickstart his high school campaign.

“It helped me develop how I read holes and gaps and stuff like that.”

Pappin wants to continue to develop as a player this fall.

“I want to work on my open-field running because I am more of a straight through runner. Once I break through that, I am trying to score touchdowns.”

Elijah used to train with Jarrel but the latter is now playing for the St. Clair College Saints.

“Now that he is in Windsor, I just put in the work by myself. I used to also practise with Enzey Youyoute and Javier Lewis but they are also in Windsor.”

His training includes lifting weights in the gym and working on his footwork and route running on the field. His goal is to play football at the next level and study accounting.

He has already been approached by a number of Ontario schools and the calibre of the schools’ accounting programs will play a key role in where he decides to go.

Pappin has high hopes for the 2022 version of the senior Patriots.

“I think we are going to OFSAA (Ontario Federation of School Athletic Associations bowl game),” he said. “We basically have the same team as last year but we are all more developed now. And some of the Grade 11s moving up are really talented.”

Oreskovich isn’t quite so confident.

“The senior Saint Paul football team hopes to be competitive during the 2022 season. Our expectations are no different than any other year and that is to practise efficiently, execute plays both offensively and defensively as planned, never look at the scoreboard or focus on winning. Our focus is to be successful on every play executed and winning should be the result.  Preparation is critical before we play each game.”

He describes his squad as a veteran team of 10 12Bs and a number of promising Grade 11 athletes that played junior last year.

“We have a good mix of veteran and first-year seniors that will increase our depth when injuries hit us.”

Oreskovich expects all the team in the Niagara Catholic Athletic Association league to be competitive but feels Notre Dame is very strong with experienced players and excellent coaching.

“Blessed Trinity always plays aggressive and physical and will be a match for any team. BT is also very well coached by Mark Antonelli, Brad Hubbard and Sean Jones. Brian Carter’s Saint Michael team will also be tough and well prepared. Bernie Tessier and Lakeshore is looking forward to competing this year and will also be in every game. Denis Morris and Holy Cross is coached by Andy Cecchini and Gerry Disanto, who are both disciplined and dedicated coaches and they will be well-prepared and a challenge for any team in the league.”