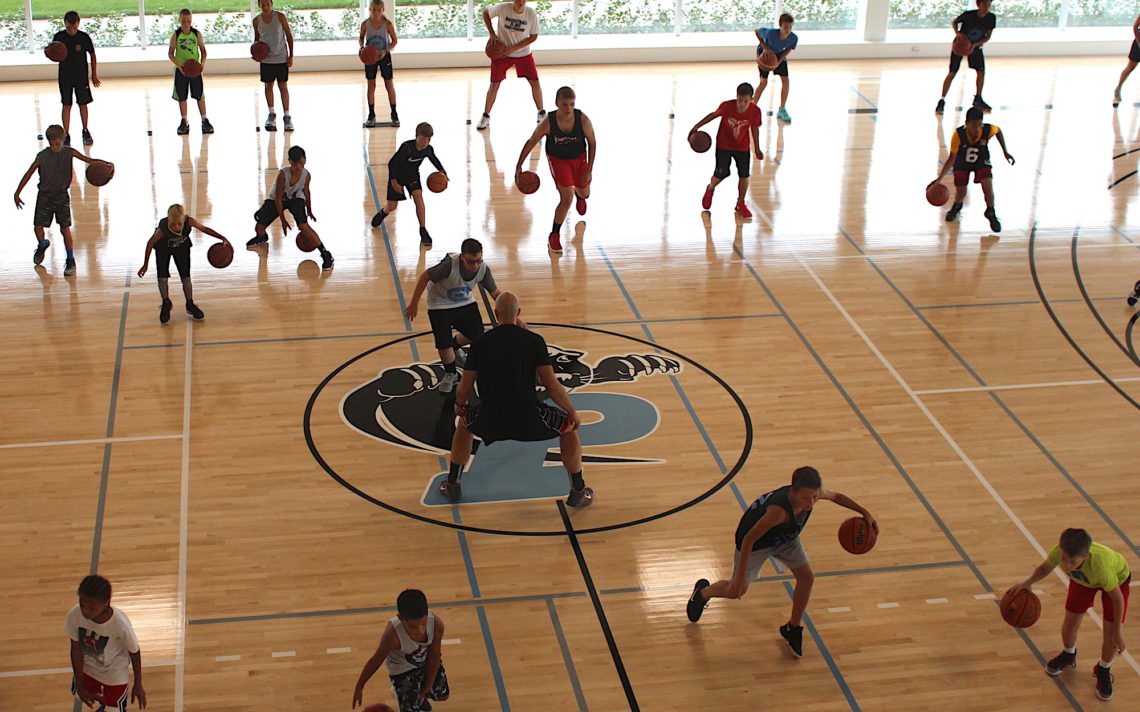 Panthers show off their new digs

This Saturday was a chance for the Pelham Panthers Basketball Association to show off its new home.

The association hosted an open house at the new Pelham Community Centre from 9 a.m. to 4 p.m.

The event featured a free two-hour No Limit Performance skills session, members of PPBA executive were on hand to answers questions about its fall and winter programming for both house league and travel basketball and several of Pelham’s club teams were on the courts throughout the day.

Sitting in the PPBA’s new office at the community centre, Panthers president Brian Bleich was delighted with the association’s new abode.

The centre features two full-size high school basketball courts and four courts going sideways for elementary school aged kids. At the centre of each of the two main courts, there is a prominent Pelham Panthers logo.

The association signed a five-lease with Pelham and also made a significant contribution to the centre’s capital campaign.

The Panthers will use the gyms four to five hours a night during most week nights and then on Saturdays and Sundays.

It will pay a little bit more for the usage of the community centre compared to local high school and elementary schools, but it’s a small price to pay for such an excellent facility.

The association will still be using some of the schools because of the volume of programs run by the Panthers.

Last year, Pelham Panthers basketball had 425 players in its programs, and almost half were on travel teams. Pelham had 19 travel teams in action last season, the most of any organization in Niagara.

Four years ago when Bleich took over as president, Pelham only had eight or nine travel teams.

Bleich attributes the popularity of its travel programs to its coaches and the partnership with Mihai Raducanu’s No Limit Performance training program. Pelham has even been attracting players from others centres to join the Panthers organization.

“Partnering with No Limit helped a lot and we have a lot of ex-university players coaching in our association now,” Bleich said. “Plus it is the skills, the dedication and the level that we play and the fact that we train year round.”

“Our younger boys teams do pretty well, but as we get older it is tough to compete against the Toronto teams,” Bleich said. “Girls basketball in Niagara is strong and we are working at it on the boys side, but right now we are not at that level.”

It is a work in progress in Pelham and elsewhere.

“We are building the boys from the bottom (age group) up,” Bleich said. “Our boys program now go into Grade 11 and when I took it, we had Grade 8 and nothing above.

“For a lot our ages, we have two teams.”

No Limit holds training sessions with Pelham’s house and travel league teams and, this year, a No Limit trainer will be Pelham’s house league coordinator. She will be implementing a curriculum for each age group.

No Limit’s training will now be based out of the Pelham community centre as part of the Panthers’ court time allocation.