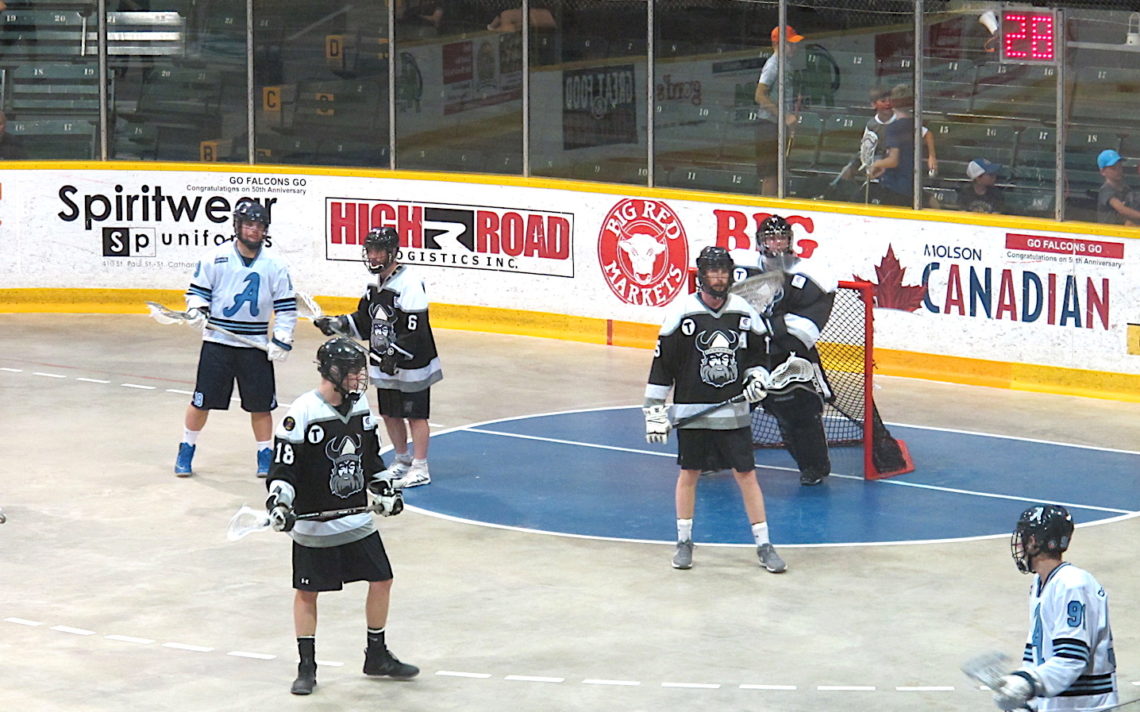 The St. Catharines Athletics came up a little short at both ends of the floor Sunday.

The A’s fell behind early and were never able to fully get their offence untracked to mount a comeback as they dropped a 9-5 decision to the Orangeville Northmen in Game 1 of their best-of-seven Ontario Lacrosse Association junior A semifinal playoff series at Jack Gatcliff Arena.

Game 2 is Tuesday in Orangeville with Game 3 back at Gatecliff Wednesday at 8 p.m.

The A’s jumped out to a quick 2-0 lead less than five minutes into the game, but by the end of the first period were trailing 5-3, an unusual position for a team which finished second in fewest goals permitted during the regular season.

“And they weren’t the best goals,” A’s coach Steve Toll said when asked about the early deficit. “We were focusing on one guy (Kyle Waters) and he got five goals tonight.

“We put together a plan and they didn’t execute the plan.”

“They battle so hard and when you get down early it’s so hard to come back against them,” he said. “We want to play with a lead and take the pressure off the offence.”

Having said that, the A’s were unable to put together any sustained offence.

“We didn’t score tonight, and they did,” Toll said. “I’m happy we got good scoring chances, you just have to bear down. He (Orangeville goalie Rylan Hartley) isn’t going to give up many, so when you get the chance to score, you better score.”

St. Catharines defeated Orangeville in both meetings in the regular season, including one in overtime, and pretty much everyone expects the set to go at least six or seven games.

“It’s just one game. It takes four to win the series,” Toll said. “Never too high and never too low. Even keel the whole time.

“I told the boys to keep their heads up. Life goes on and we’re still playing the game we love to play.”

Tamas said it’s imperative the A’s move on and bring their best Tuesday.

“You have to have a short memory and learn from it and come back even harder next game,” he said. “We’re not going to sweep our way to the Minto Cup. It’s not going to be easy.”

A’s acorns: Liam Hamm, Tanner Vail, Jake McNabb and captain Latrell Harris did not dress for the A’s . . . Harris, who arrived in the second period but did not play, will be back for Game 2 after helping Canada to a silver medal at the World Field Lacrosse Championships in Israel . . . Hamm and McNabb are both expected to play Tuesday . . . Attendance was listed at 597.