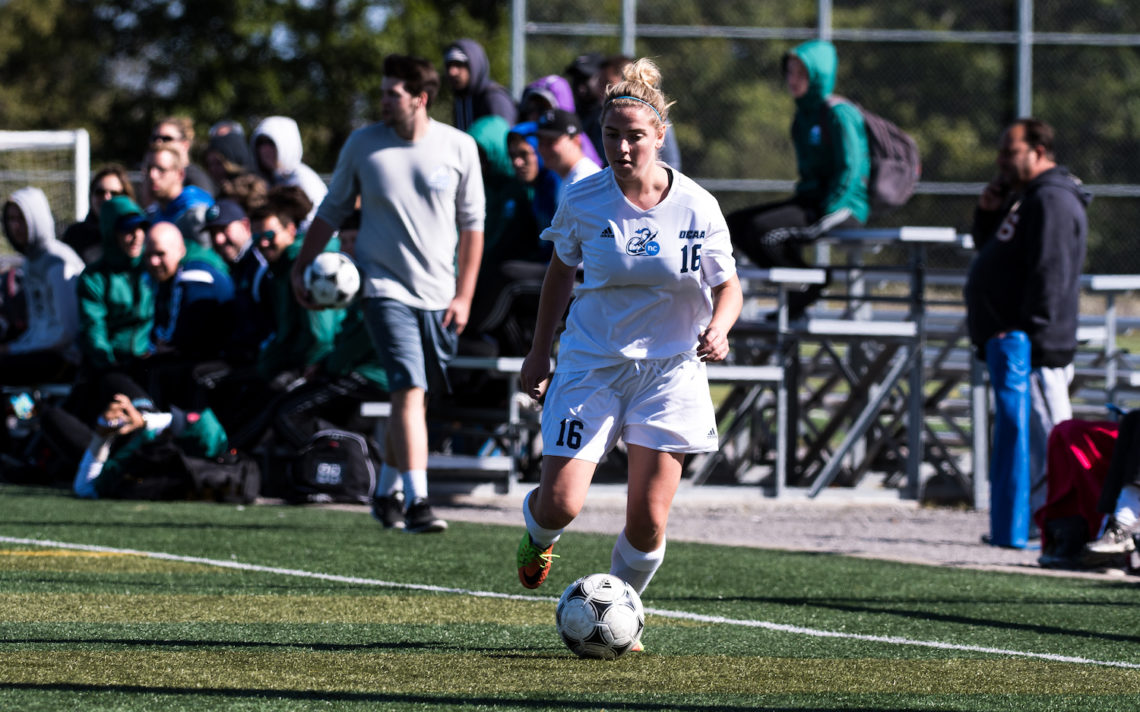 For Guelph, Notre Dame Welland product Johnny Augustine had 18 carries for 91 yards, including TD runs of one, three and 22 yards. Augustine tossed in a pair of solo tackles for good measure.

For Waterloo, former A.N.Myer quarterback Tre Ford was 9-for-12 passing for 212 yards, including a 23-yard TD pass. He also carried the ball 11 times for 65 yards and scored on runs of 15 and six yards. Brother Tyrell had four solo tackles and a solid special teams game.

The men’s basketball team rolled past the Memorial SeaHawks 96-56 Friday night at the Bob Davis Gymnasium.

Brock had three players in double figures led by Dani Egaldi who recorded 23 points and 12 rebounds for the double-double. Johneil Simpson collected 14 points, highlighted by four three-pointers while Mitch Saunders added 10 points off the bench. Tyler Brown and Daniel Cayer both chipped in with nine points to round out the leaders.

The men’s and women’s golf teams were on the road competing at three different OUA sanctioned tournaments.

At the Waterloo/Laurier Invitational, the Brock men placed fourth as a team, seven strokes off the gold medal Western Mustangs.

At the McMaster Invitational, the Brock men placed seventh overall, 35 strokes off the Western Mustangs who won both open OUA tournaments.

Spencer Gates shot a round of 77 to finish eighth overall and lead the Badgers. Lisko (82), Snook (82), John MacDonald (87) and Kaelenn Briggs (88) rounded out the Brock scoring.

The women’s lacrosse team finished with a 1-1 record at Guelph Sunday. The Badgers won 11-4 against the York Lions and lost 12-7 against the Trent Excalibur.

In Game Two, Lindsey Highfield and Eryn Brown had two goals each while, Schwende, Halliday and Mel McCall rounded out the scoring.

The men’s lacrosse team improved to 7-0 in CUFLA West regular season action as they defeated the Guelph Gryphons 8-7 Sunday afternoon on the road.

The women’s hockey team picked up their first win of the pre-season as they defeated the NAIT Ooks 5-1 Sunday afternoon at the Seymour-Hannah Centre.

The women’s soccer team accomplished their mission for the weekend defeating Algoma 7-0 and 4-0.

Bethany Kromer potted two goals and also assisted on goals by Ashley Harris and Brooke Boekestyn, who also netted a pair. Cierra Bernicky added two more for the Badgers, spacing them eight minutes apart in the second half.

Marilena Spagnolo made the save on the only shot she saw on net for her fifth shutout of the season.

Ashley Harris had two goals while Sam Bayer and Kristen Bettencourt also found the back of the net.

Spagnolo made two saves for the shutout.

The men’s rugby team improved to 4-1 as they defeated the University of Toronto Varsity Blues 47-22 Saturday on the road. With the win, the Badgers clinch an OUA playoff berth with three games left in the regular season.

Brock’s offence was led by Ryan Hickey who recorded two tries, giving him nine on the season. Spencer Karn connected on five converts to give him 19 in five games. Adding single tries were Wade Little, Curtis Patrick, Zack White and Steve Commerford.

The women’s rugby team ended the regular season on a high as they defeated the University of Toronto Varsity Blues 76-7 Saturday afternoon on the road.

The Badgers led 28-0 at the half before erupting for 48 second half points on route to a perfect 4-0 regular, the best finish in school history.

“This was a great day for Brock women’s rugby,” said second year head coach Stefanie Pavlovich. “We will enjoy today and get back to work this week as we prepare for the York Lions in the OUA quarter-finals on the road.”

Leading the Brock offence was the trio of Taylour Hurd, Katelun Heyens and Jenna Rainville who all recorded three tries each. Meahan Hart contributed with 13 points adding a try and four converts. Taylor Knezevich, (4 converts), Lauren Wilks (1 try) and Kaylah Moehling (1 try) closed out the scoring

The men’s soccer team recorded a 2-0 victory against the Algoma Thunderbirds on the road Saturday afternoon. With the win, the Badgers move into a tie for fifth place in the OUA West with their sites set on a playoff berth.

Alexander Makubuya scored at the start of the second half for the Badgers. Nine minutes later Anthony Smith buried the insurance goal.

The Badgers were led defensively by Anthony Stott in net. In his third start of the year, the Stratford native was strong making saves on all four shots he saw.

Sunday at Algoma, the Badgers earned a 6-1 victory.

The cross country team travelled to London for the Bill Salter Western International.

It was the first meet of the season, and a very competitive field. The conditions of the day were tough, the temperature was 26 degrees at the start of the women’s 6 km race and rose to 28 degrees by the start of the men’s 8 km race.

The Knights won back-to-back games against the Redeemer Royals (5-1) and the Lambton Lions (5-1). Carlos Williams of St. Catharines scored in both games and surpasses Matt Miedema for most all-time goals with 13. Other goal scorers for the Knights were Alex Latham of Welland,  Noah DiEgidio of Welland, Eric Woodland of St. Catharines, Marc-Andre Boucher and Jordi Amores, both of Niagara Falls, and Zach DeWeerd.

The Knights defeated the Redeemer Royals 6-0 and the Lambton Lions 1-0. Alexandra Craig recorded a hat trick in the victory over Redeemer. Knights’ rookie striker Michelle Maecker of Fonthill scored her team-leading fifth of the season to lead the Knights to a 1-0 victory against the Lions. The only other Knights goal scorer was Samantha Macsia of Port Colborne.

The men’s basketball team opened the exhibition season with a 74-64 win against the hometown Centennial Colts.

The first game was a 91-69 loss to the Vanier Cheetahs. Jordan Wilson led Niagara with 22 points and 10 rebounds.

The defending OCAA and CCAA champions prepare to compete in this weeks’ OCAA championships, which will be hosted from October 2-4 at Crimson Ridge Golf Course in Sault Ste. Marie. The team features six new players, with only one returning from last year’s championship team. New to the team are John Hickson of Grimsby, Eric Clare,  Andrew Noble of St. Catharines, Marshall Pemberton, Nolan Von Kalckreuth of Fort Erie and Rein Zenka.

Male Athlete of the Week

Carlos Williams of the men’s soccer program has been named this week’s Male Athlete of the Week.

The third-year striker from St. Catharines finished the week off with an impressive three goals in two games.

Williams has played an integral role in lifting the Knights to a 5-1 start to this season, scoring three goals in six regular season games. His ability to make things happen on the field goes far beyond just scoring goals, as his on-field presence improves the play of all the players around him.

Female Athlete of the Week

Michelle Maecker of the women’s soccer program has been named this week’s Female Athlete of the Week.

The rookie striker from Fonthill receives the award after having an impressive week offensively, scoring three goals in two games. The leading goal-scorer for the Knights this season has been red hot all season, scoring five goals in six regular season games.

After a slow start to the Knight’s season, Maecker’s ability to put the ball in the net as of late has resulted in three straight victories for the women.