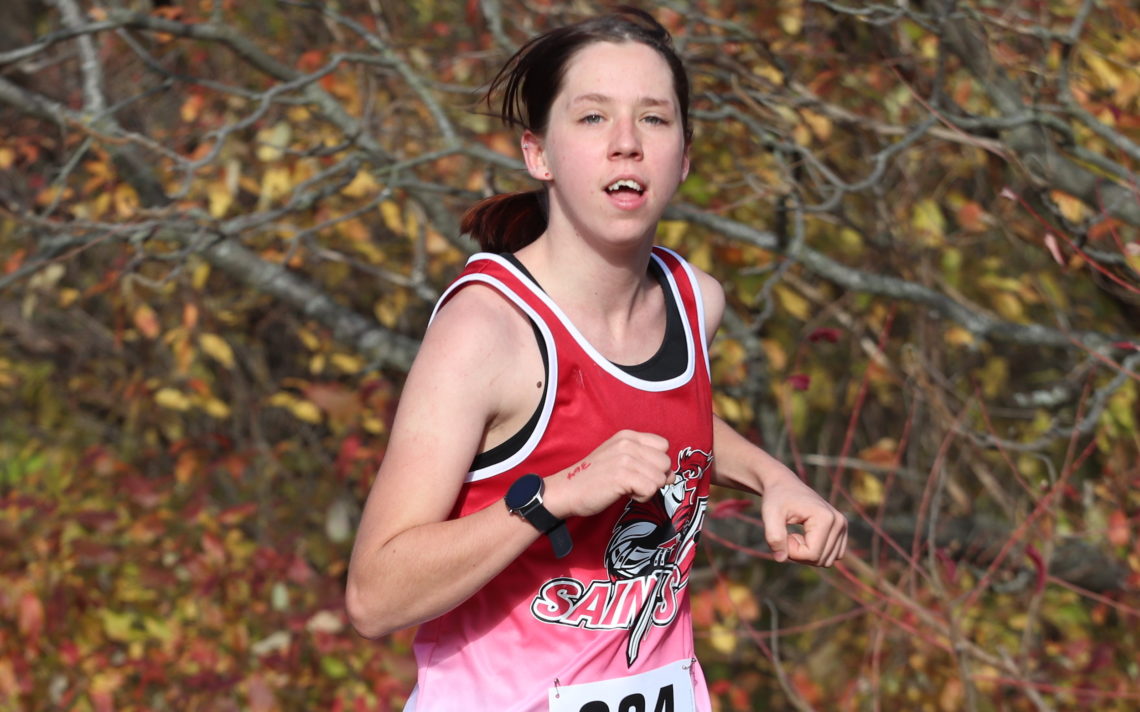 The Grade 10 student at Eden finished three seconds behind the winner, Saul Taler from Glebe Collegiate.

Tomori described his silver medal as a crazy race.

“It had to be one of the most difficult races that I have ever ran. The hills were really hard, especially the second big hill on the second lap,” the Edge Triathlon Club member said. “It just destroyed my spirit during the race.”

Thankfully, the 15-year-old was able to regain that spirit and persevere his way to a podium finish.

“If I had been that dead on the second hill on the first lap, I would never had been able to finish. It was a crazy, hard course but coming around that second hill, I kept telling myself ‘You just have to push’ and I pushed through the pain of the hill and tried to end with a bit of a kick going down the path to the finish line.”

Going into the race, a podium finish was not in Tomori’s realm of possibilities.

“I hadn’t seen a lot of the times but I knew there were a lot of really good runners that I was competing against. I was hoping to get top 20, maybe top 10, but I was not expecting to do as well as I did.”

It was an amazing moment when he crossed the finish line as an OFSAA silver medalist.

“I was super happy because it has been a big goal of mine my entire life to do something big in running. It was a special moment for me.”

Tomori realized early on in the race that he had a chance to do something great.

“Right out of the first lap when we came up the first big hill, I was thinking that it wasn’t killing me and I was still top five. I knew if I could keep the pace and keep pushing, I might be able to keep my spot with the top five people and had a chance of maybe even medalling.”

Winning OFSAA silver is a big boost in his running career.

“I want to keep improving myself and keep getting better times and doing better runs. Now that I am realizing how much of a better run I can do, it’s very motivating.”

In each of his fall high school races, he managed to shave 30 seconds off his time in the five-kilometre race.

“I started at 17:30 at Brock (pre-zone) and then proceeded to run 17 at zone and then a 16:30 at SOSSA (Southern Ontario Secondary Schools Association meet),” he said. “Then I ran a 16 at OFSAA and it has just been a lot of crazy increases. I definitely want to keep going with it.”

He celebrated his silver medal in sweet fashion.

“My mom (Stephanie) got me a pack of Nanaimo bars and I had a few of them because I hadn’t had a lot of sugar before the run.”

Next up for Tomori are the Athletics Ontario cross country championships this weekend followed by nationals.

“Graham is a great racer. He thrives in a competitive environment and being upfront with the best guys in the province. This fall he committed his training to win a medal at OFSAA,” he said. “He stayed focused on that goal every workout and every big race this season. He had a few really strong workouts this fall where he was pushing with our senior boys and we knew he had a great shot at a medal.”

Scull is excited for Tomori.

“We’re looking forward to the future with Graham and continuing to get better at the training process and our approach to the big races.”

In the individual race, Jackson Sider of E.L. Crossley was 47th, Carter Timmins of Denis Morris was 84th and Jackson McIntosh of West Niagara was 90th.

Julia Tremeer of Notre Dame was 16th and Madison Eaton of Laura Secord was 44th.

In the individual race, Kaden Shaw of A.N. Myer was 47th, Fenway Breckel of Governor Simcoe was 81st and Samuel Tonnies of Port Colborne was 85th.