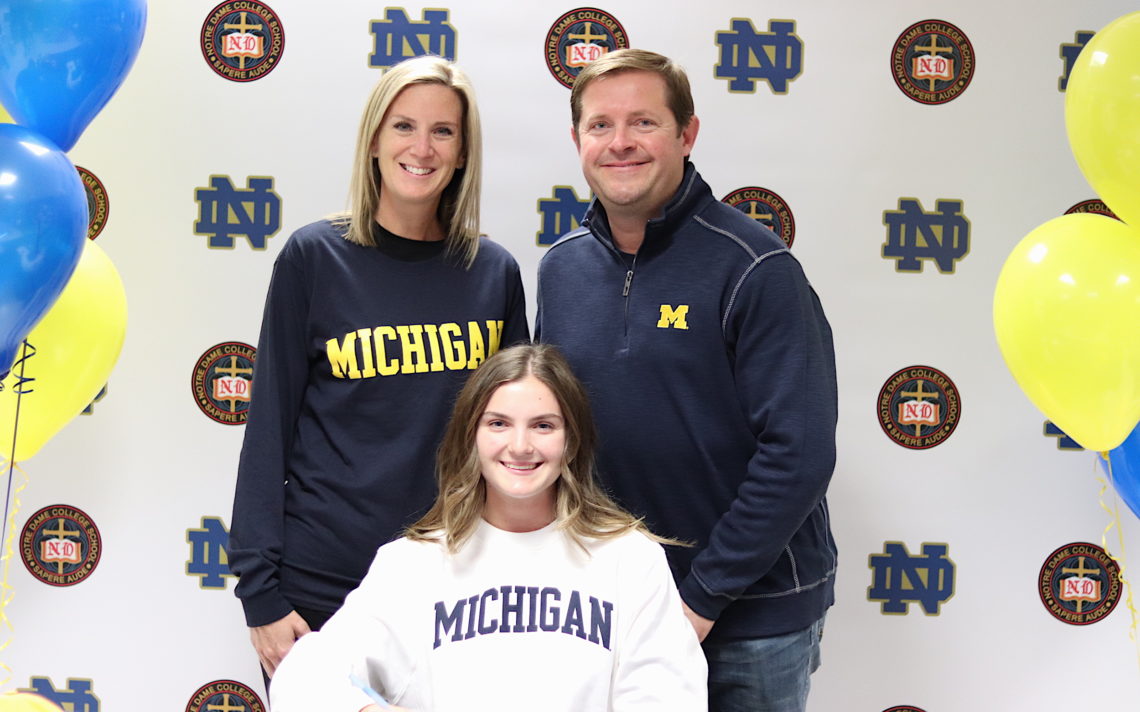 A summer of success on the water paid off in a big way Wednesday for Notre Dame’s Madeson Scott.

Prior to flying out to British Columbia to compete in the National Rowing Championships, the Grade 12 student signed on the dotted line to become a scholarship rower at NCAA Division 1 Michigan.

The signing capped a year where the 17-year-old Welland resident: placed first in the double at the Stotesbury Cup; won the midweight single and open double at the Canadian Secondary Schools Rowing Association championships; finished 11th in the quad representing Canada at the under-19 world championships in Varese, Italy; and, teamed with Anna Pamenter, Fiona Elliott and Cait Whittard to win gold for Team Ontario in the quad at Niagara 2022 Canada Summer Games.

One her crewmates in the Team Canada boat is already at Michigan and another will be joining Scott there in the fall.

At every step along the way, Scott has credited the Ontario NextGen Performance Centre in Welland and coaches, Greg Szybka and Will Mulcahy.

She started rowing at a South Niagara Rowing Club summer camp when she was 12 years old and rowed two summers there before joining the Notre Dame rowing team in Grade 9. Going into Grade 10, she started with the performance centre.

“I have said it before but I seriously owe them everything. They made me who I am today,” Scott said. “I joined super young in my Grade 10 year and they pushed me to do things I didn’t know I could do and have given me opportunities for things I never imagined, like being on the national team and getting coached by such high-end performance coaches.”

Scott was on the radar of several American schools and had four offers to choose from. She made official visits to Michigan, Washington State, University of Tennessee and the University of South California before ultimately deciding on her home for the second four years.

It was a little bit of everything that made Scott choose Michigan.

“I  was always told that I was going to know where I wanted to go and that kind of stressed me out because I didn’t feel that anywhere I went until I got to Michigan. It’s the environment and the coaching and is also felt so familiar because there were a lot of Canadians and familiar faces there,” she said. “It felt like a place I could call home which is what I was looking for.”

Scott is planning to study biology or chemistry at Michigan.

Her on-water goals for her first year are modest.

“I haven’t swept a lot so I am looking forward to learn how to sweep this spring to go there in the fall and be 100 per cent ready to go.”

In the meantime, work will continue at the Ontario NextGen Performance Centre in Welland. She is there six days a week, including two practices every day.

That demanding schedule should have her well-prepared for the rigours of being a student-athlete at a Division 1 school.

“I feel like I have a really good idea of what it is going to take because I have a busy schedule right now and I am so ready for it.”

Scott had a strong performance at last year’s National Rowing Championships and can’t wait to compete in them again.

“Last year, I was fourth overall in the single and I am really hoping for a podium finish this year.”