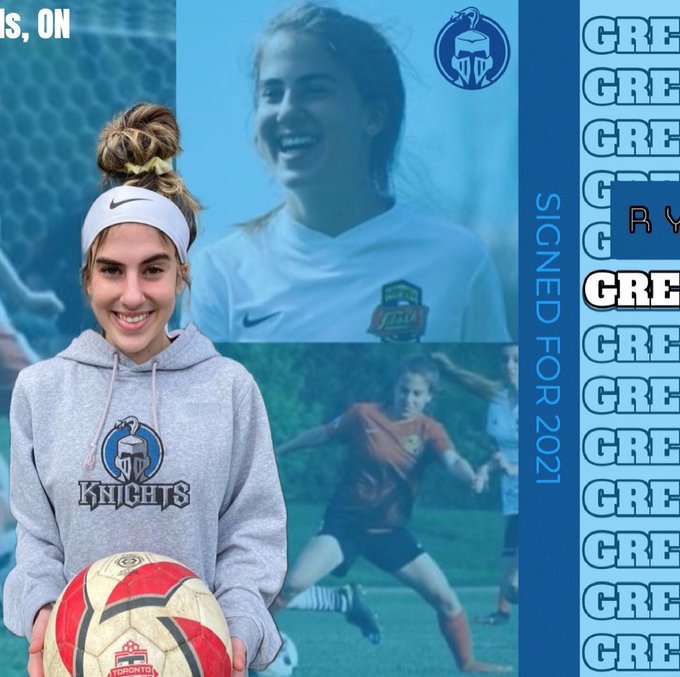 Rylan Greatrix has been on the radar of the Niagara College women’s soccer program since she was in Grade 9.

“We looked back at our scouting report which stated: very fast; good dribbling skill; and, aggressive,” Niagara coach Rob Lalama said. “Today, Rylan possesses all of these skills and more.”

Niagara College recently signed the Grade 12 student at Saint Paul to a soccer scholarship and Lalama is thrilled with the surprise addition.

“We had expected Rylan to head to a U.S. school so we’re very pleased she decided to stay in Canada and attend Niagara College,” he said. “With all her attributes, I think she will be a very good collegiate player. She’s a great addition to our team.”

The 17-year-old Niagara Falls resident has been thinking about playing soccer at the next level since captaining a Niagara-on-the-Lake squad to an Ontario Cup provincial championship. She tried out for and made the Burlington Ontario Player Development League but then decided to move on to play with the Western New York Flash. She played for that team for three years in the Elite Clubs National League in the Ohio Conference.

“It was lots of travelling. I spent the majority of my high school experience travelling around the States. I missed many dances and school experiences so that I could attend tournaments in West Virginia, South Carolina, Ohio and all over the place.”

Early in 2020, she started to think about a career in nursing and that decision, coupled with the COVID-19 pandemic, made her turn her thoughts to playing with Niagara College.

“It was kind of weird how it happened. As soon as I decided to play in Canada because of the route I wanted to take with nursing, the whole COVID thing just kind of happened. The borders closed down and I kind of had to rethink options because I wasn’t sure when the border was going to reopen. I wasn’t able to train with my teammates.”

Greatrix received multiple NCAA scholarship offers, mostly from Division 2 and Division 3 schools, before Lalama convinced her to come to Niagara.

“Compared to everything else I was being offered, he offered me a spot on the team and playing time and it felt like the right choice,” she said. “I just thought staying at home was the smartest decision.”

The current Empire Niagara player knows Niagara can be a bridge to other things as well.

“It is only a two-year program and if I end up wanting to take the university route I can still do that,” she said. “There are many different routes I can go from the choice that I took. It allows me to pursue many options and playing soccer is the best part.”

She can’t wait to get started at Niagara.

“This is what I have been towards for my entire high school experience: Being on a team and being a part of the college athlete experience. I am excited to wake up in the morning and train.”

Her goals are both personal and team-oriented.

“My goal is obviously to help contribute to the team as much as I can and I am looking forward to getting back to training. I am going to train as hard as I can so I can be one of the best players for Niagara.”

“When people see me, I am smaller and they like to think they are going to push me around but I like to stand my ground and play a tough game.”

At 4-feet-11 and weighing about 100 pounds, she plays with a chip on my shoulder.

“Because I am so small, I kind of have to. It was amazing when I was playing in the States, how big some of the other girls are. Some of them six feet and I’m small so I obviously have to play a big game if I want to compete. Many coaches in the States mentioned they liked my aggression.”

She is excited to study practical nursing at Niagara.

“I hear that it is a really good school. It is good for placements afterwards for jobs, especially for the program I am going into. It has one of the best nursing programs around for colleges,

Her interest in nursing came from working at the Stamford Estates retirement home.

“I obviously deal with the elderly on a daily basis and that kind of has given me motivation and introduced me to that type of work.”

Greatrix is thankful for the help her parents, Toni and Rob, gave her as well as the efforts of coaches, Davide Massafra, Milana Schramm and Dane Lane.