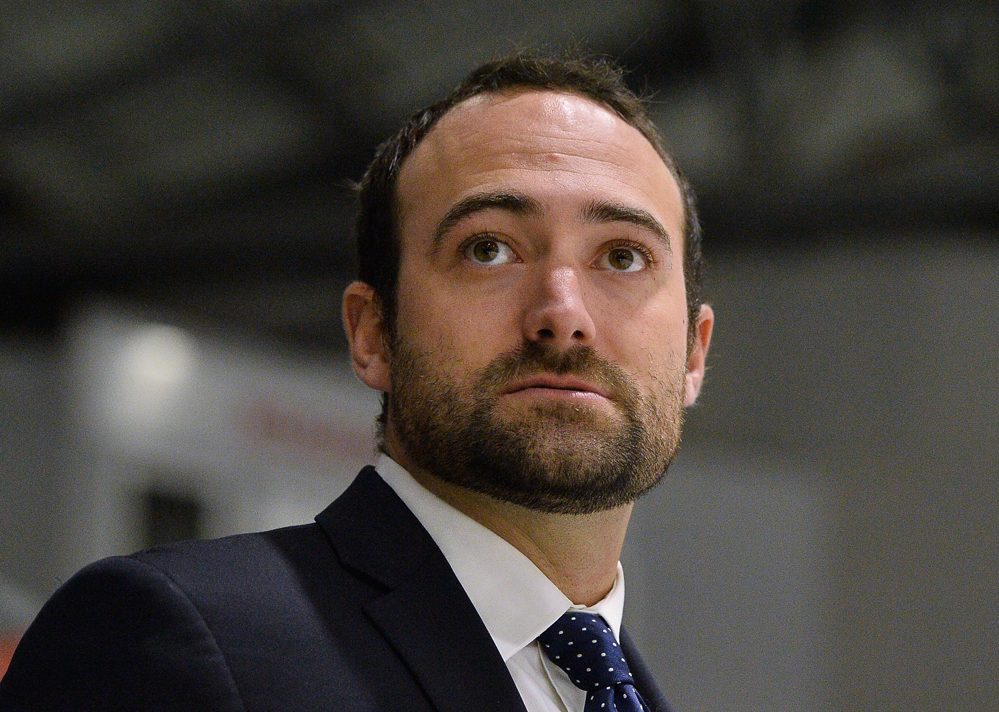 Timing can be everything in the hockey world.

For eight years, Billy Burke worked in the background with the Niagara IceDogs beginning as a statistician in the press box followed by several seasons as an assistant coach.

Burke always maintained he was more than satisfied to work as an assistant and seemed destined to remain in that role for at least the near future after head coach Dave Bell signed a three-year contract extension following last season.

But Burke woke up one day last month to a text from his father, IceDogs owner Bill Burke, Sr., asking him to meet him at the Meridian Centre.

Bell had resigned to take a position as an assistant coach in the American Hockey League, and the club was in need of a new head coach, and in a hurry.

Once he wiped the sleep from his eyes and shook off the cobwebs, Burke quickly realized he was the logical choice   for the job.

“My first reaction was to pick up the ball and run with it,” the 31-year-old said. “It’s not ideal for sure and not how I expected it but it’s good this way. You don’t have time to think about it. You’re just thrown into the fire and here we go.”

Burke admitted Bell’s departure came as a shock — the two were golfing together the day before and Burke said there was no indication from Bell he was going to take the position.

“We were together until 10 p.m. the night before and all was good and then to wake up under 12 hours later and hear he had taken the job . . . to not hear it from Dave was a little discouraging,” Burke said.

Burke then quickly changed gears and knew he had to prepare for a new job with added responsibilities and pressure.

“The second I read the text message I was nervous at first,” Burke recalled. “The shock and the nervousness came first but then honestly once you start getting over it, and then when you start thinking about things I would do that maybe we didn’t do last year and then being excited about the group of guys we have coming back.

“By the time it was dinner that Tuesday, I was excited.”

Fast forward to the present and Burke appears cool and calm in his new position.

He and his staff, assistants Kris Sparre and newcomer Ted Dent, along with general manager Joey Burke, quickly cobbled together plans for training camp in only a few weeks.

It was a quick indoctrination to his new job and a far cry from being an assistant where Burke took direction from either Bell or former coach Marty Williamson.

Now, the buck stops with him.

“The thing about being an assistant is you make suggestions, not decisions,” he said. “When things don’t go well you can kind of back up into the darkness a little bit and let the axe fall on the head coach.

“With Marty’s help the last couple of years, I had a bigger role behind the scenes than people thought. It’s kind of become a natural transition.”

Still, he realizes there will be adjustments.

“It’s a challenge. They will be a learning curve, for sure, with any rookie head coach. I’m not quite sure what the biggest challenge might be — managing the lines and players — all stuff I’ve done before.”

Burke is a big believer in communication. Players today are no longer satisfied to simply ask how high when a coach says jump.

Now, they want to know why.

“Experience counts and it’s a great asset for some of the guys but I think you need to have relationships with the guys and understand where they are coming from,” Burke said. “They’re not all farm boys who are bailing hay. It’s not like that anymore. It’s the why generation. They want to know everything. They’re plugged in on their phones to hundreds and thousands of people and they have validation constantly. They don’t need me screaming at them to do it like this or that.”

Burke’s age should be an asset in that department.

“It seems to be the way. NHL and junior coaches are getting younger. I have a lot of energy and passion and respect for the league and the players. I just want to carry it on the guys,” he said. “It’s not just standing out there me screaming at them and do it this why because I said so.”

Burke, who has played at the Ontario Hockey League and Canadian university level, admits he has played for coaches who didn’t always feel it necessary to explain themselves.

“I’ve been around guys who do the mind games. I’ve seen coaches who play the mind game and try and piss guys off.

“To be successful, you have to be honest with the guys. They can see through any BS and just be yourself. You have to be confident and sure of yourself. I can’t pretend to be Ted Nolan or Dave Bell or Marty Williamson. I have to be myself.”

Being himself also means having to answer for his last name.

When your parents run an OHL team, your brother is the GM, and your wife works in the business department, people are going to ask questions.

“I understand I got the job eight years ago because my parents owed the team. They wanted to work with their sons,” he said. “But they were also smart enough and had enough success in their lives to realize you can’t just give someone something they aren’t ready for. If we were still in the printing business and I moved up in that business, people would say the same thing. He’s only there because it’s a family business.

“It comes with the territory. Joey and I both learned a long time ago that fans are passionate. It’s motivation to work harder and prove the doubters wrong and prove our supporters right. Anytime we do anything it’s the organization is a joke and the sky is falling but we’ve had great people around us and we’ve learned from some of the best.

“The more success we have on the ice the less people will talk about it.”