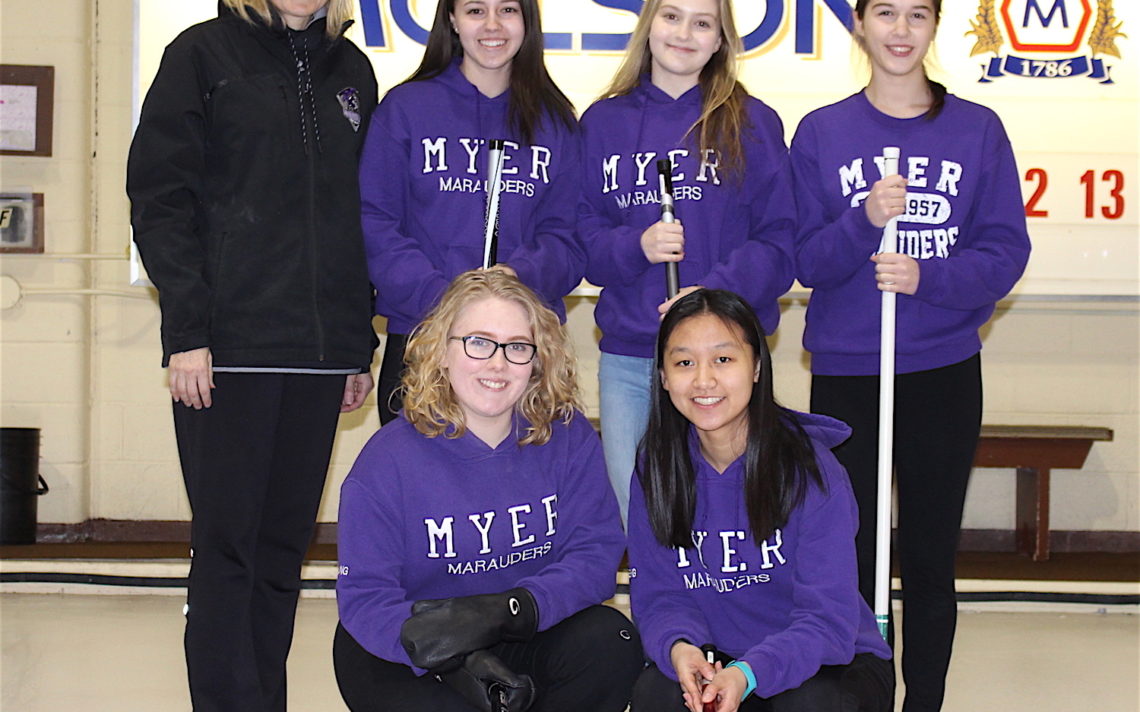 A.N. Myer’s run of success in girls curling continued in 2018 with this year’s rink qualifying for both the Gore Schoolgirl and Ontario Federation of School Athletic Associations championships.

The squad, made up of skip Megan Ford, vice Jessica Zheng, second Kate Phillips, lead Abby Zwarun and alternate Maxie Pasetto, managed to carry on a tradition that has seen Myer win Gore provincial titles in 2015 and 2017, and an OFSAA silver medal in 2016.

Ford was lead for Myer in 2016 and second in 2017 while Zheng was lead on the 2017. All the other members of the rink are newcomers to the sport.

Coach Patty Rodgers feels there are a number of factors that have contributed to Myer staying hot on the ice.

“There’s a huge amount of dedication on behalf of the kids, there are good athletes coming through the program, they have great attitudes and it’s people like Megan and Jessica being able to lead the team,” she said.

And while the team went 0-3 at Gore and 1-4 at OFSAA, the potential for next year is excellent with all five curlers returning.

“Now that we have that experience at provincials, they know what it is like and they will be able to perform that much better next year and have that ability to take a breather, calm down, do each shot and maintain focus,” Rodgers said.

She felt nerves and inexperience dealing with difficult ice conditions at OFSAA led to the team’s record.

The team practised twice a week during the season and competed at night in the women’s league at the Niagara Falls Curling Club. It was that work ethic that led to the teams’s success.

“We all wanted to work so hard together this year and everyone came out to practice every single day,” said Ford, a Grade 11 student. “I could see it in their eyes and faces that they really wanted to learn the sport of curling.”

As the skip and a veteran curler, the 16-year-old saw herself filling a coach’s role on the ice.

“It was a lot of teaching and leadership this year, going from what we had in previous years to having new curlers come along.”

Ford saw herself improve as skip as she helped the novices learn the game.

“I am the lead on my competitive team and throughout my career as a competitive curler, I have never had to think of strategy before,” she said. “Coming into this skip position, I have gone to the pros on TV, gathered up their strategy, and learned from my dad (Sean), who is the co-coach.”

With so many new curlers, Ford was thrilled the rink qualified for both provincial championships.

“It was a big accomplishment to get there and I was really happy to be there,” she said.

Phillips, one of the three new curlers on the team, was attracted to the sport through family connections. Both her grandfather, Bob Hawkins, and mom, Jan Hawkins, have been involved in the sport.

“I thought it was my time to get involved in the sport,” she said.

She loved the sport right from the first time she hit the ice.

“I like the strategy combined with the physical component,” the Grade 11 student said. “I played sports all my life and it’s different than anything else I have played.”

The 16-year-old has also played soccer, volleyball, basketball and golf among others.

Phillips felt the makeup of the rink made it successful.

She believes the experience the rink gained at this year’s OFSAA and Gore Schoolgirl championships will be crucial to next year’s success.

“It will unbelievable,” she said. “Going into provincials competitions and never having played in provincials before, was really difficult for all of us.

“There was a lot of pressure from the school and from our families.”

That pressure was based mainly on how well the team had done in previous years.

“It was unbelievable, having everyone and all the teachers coming up and congratulating us for making it this far in our first year,” she said. “It was a lot of pressure to come back and say that we hadn’t done so well.”

Thankfully, everyone at the school was extremely supportive of the team and proud of its accomplishments.

The biggest lesson the team learned was not to get down on itself.

“You have to stay positive, even when you lose a few points in the first end,” Phillips said.