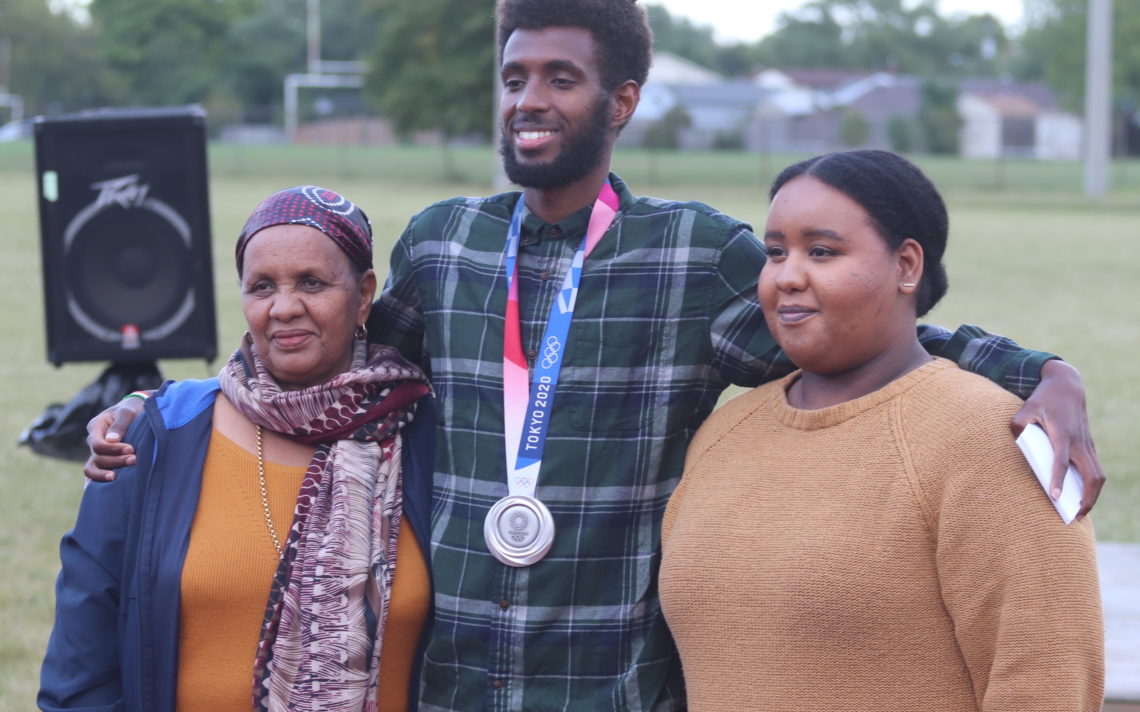 On the strength of his silver medal in the 5,000 metres and sixth-place finish in the 10,000 metres at the Tokyo Olympics, the 31-year-old former St. Catharines resident was named co-winner of the 2021 award along with Olympic women’s eight coxie Kristen Kit. It is the fourth time the St. Catharines Collegiate alumnus has been been presented with the trophy.

“I wanted to come on here and thank the City of St. Catharines and the citizens of St. Catharines for honouring me with this incredible award and also sharing it with a deserving individual,” Ahmed said Monday night via Zoom. “It was someone who, when I heard news of their success in Tokyo, I was overcome with joy and inspiration in order to deliver my own successes. I want to congratulate her as well for the year she has had.”

Like Kit, Ahmed took the time to thank the people who were there at the beginning of his athletic journey.

“Niagara Olympic Club is where I started my running journey so the individuals there that continue to keep that club going, Sharon Stewart, I want to say thank you for keeping the torch for track and field in our city alive. And all the other individuals and coaches and all the volunteers who keep coming and all the parents who keep bringing their kids to keep going with the sport.”

Those people are never far from his thoughts.

“Every day when I roll out of bed it is to keep my own successes, goals and aims but I am also trying to inspire and light a little bit of a spark in people,” Ahmed said. “Whenever that happens and I see that amongst the young generation, that is always a bonus. We always have to keep looking for inspiration in sport.”

The native of Mogadishu, Somalia gave a shout out to his adopted hometown.

“St. Catharines is an incredible city. It hasn’t been the residence for me for the last 10-12 years but it is still home. It is where, whenever I go back I feel at peace and I have a feeling of being at home. The reason why it feels that way is because of the people,” he said. “Every corner of the city that I roam, I am always greeted with love, I am always greeted with a warm welcome and gratitude for what I do as well; my accomplishments and my successes.”

“Dedication, hard work and talent has taken Moh on his very successful elite running journey. Under his Olympic achievements, he remains humble and kind. He always makes time to share his experiences with younger athletes. He is such an inspiration,” she said. “I am proud of the amazing person he is, both on and off the track. Canada should be grateful.”

“It has been five years of agony, highs, lows, just building myself up and holding on for dear life for a lot of moments, especially this last year and a half,” Ahmed  told the CBC after the race. “To come back here, especially after the disappointment in the 10,000 metres and to kind of go over again exactly what I went though in Rio; having a disappointing 10K and trying to regather myself for the five. It was tough man.”