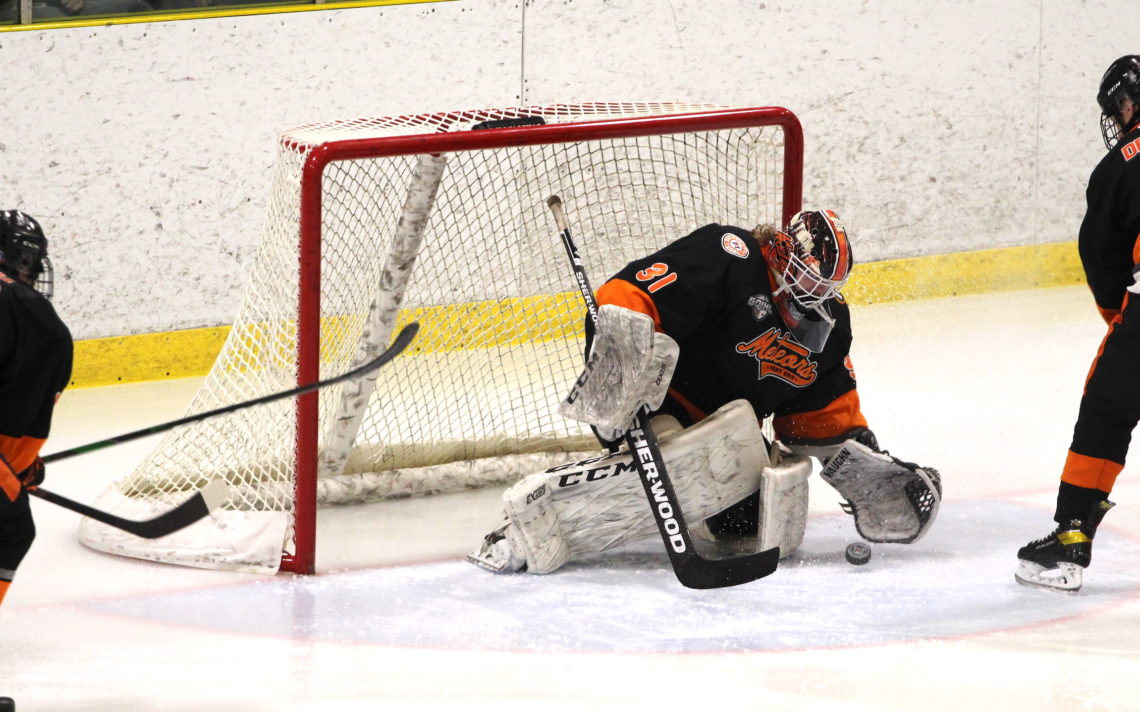 Duncan Nichols-Delay started all four games in goal as the Fort Erie Meteors swept the Welland Junior Canadians 4-0 in their quarter-final playoff series. The Meteors now take on the Hamilton Kilty B’s in the semifinals beginning Monday. Photo by: BILL POTRECZ

The Fort Erie Meteors are anything but satisfied after disposing of the Welland Junior Canadians.

The Meteors won their Greater Ontario Junior Hockey League, Golden Horseshoe Conference quarter-final playoff series versus Welland in four straight, but that doesn’t mean they are ready to rest on their laurels.

“I’ve heard a couple of times already that we’re playing with house money,” Meteors coach/general manager Nik Passero said. “I don’t see it that way. We came here to do a job and it’s not even close to being over. I don’t think we’re set up to win the first round and go home.”

Game 1 in the best-of-seven semifinal is Monday, April 18 in Hamilton followed by Game 2 Wednesday, April 20 at the Leisureplex. Dates for the remaining games of the series are still be finalized.

The Meteors took a couple of days off to rest up and enjoy their win over Welland before getting back to practice Wednesday to prepare for the Kilty B’s.

“We have work to do to get ready and be ready to go,” Passero said.

Hamilton, on paper, have a huge advantage over the Meteors. The Kilty B’s finished with the top winning percentage in the GOJHL and also took six of the seven meetings between the teams, three times scoring seven goals in a game.

“Huge test. They’re fast, they’re explosive,” Passero said. “You give them one opportunity and they’re going to score so it’s going to be an opportunity for our guys to be up to it defensively and buy in.  It’s not going to be an easy thing to do. We have to stay focused and disciplined, not just penalty-wise, but also in our structure.

“I think the series is there for the taking.”

Passero feels the opening series gave the Meteors a taste what it takes to win in the post-season.

“I think it was great preparation for what we’re about to face,” he said. “They’re stingy defensively, they’re tough. Hamilton has different threats than Welland does so it is a little bid different. They have a good goalie and six solid D and their firepower up front is pretty special so we have to lock in on that and make sure we know who is where and I think we’ll be fine.”

The Kilty B’s swept the Niagara Falls Canucks 4-0 in their opening round series, winning the opener 5-2 and then taking the next three by identical 3-2 scores, which also included one overtime win.

Braedyn McIntosh started all four games in goal and permitted eight goals in the series.

Duncan Nichols-Delay got the nod in goal in all four games permitting just six goals.