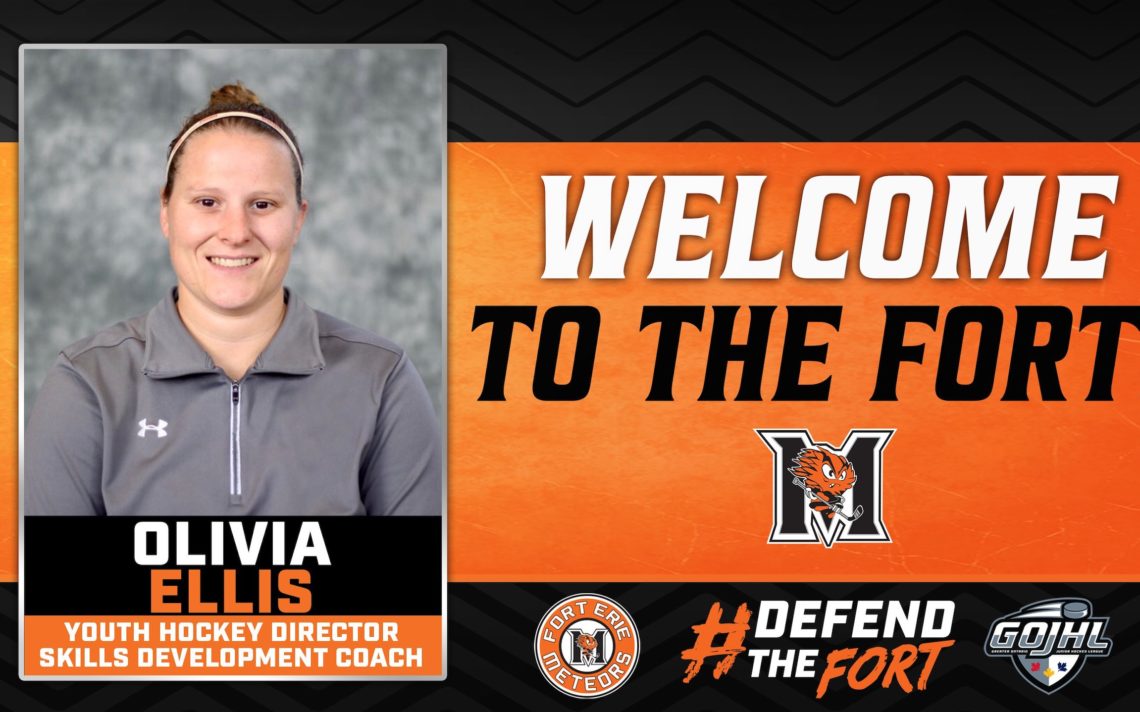 A phone call between Olivia Ellis and her former hockey coach at Oswego State helped her land a position with the Fort Meteors.

The 24-year-old part-time Ridgeway resident was looking to return to the area after working with the New Jersey Titans organization as the assistant hockey director for the girls program. So, when Oswego women’s hockey coach Mark Digby suggested she contact former Oswego forward Anthony Passero, the wheels were set in motion.

Ellis called Passero, now an assistant coach with the Fort Erie Meteors, who then set up a couple of calls with Meteors head coach and general manager Nik Passero.

“We had a couple of good conversations with Olivia and she fits exactly what we’re trying to move into in the youth department,” Nik Passero said. “It was a perfect fit and a perfect storm.”

“I’ll be a skills coach helping out in any way I can with the team,” said Ellis, who grew up in Kitchener before moving to Saskatchewan to attend Athol Murray College of Notre Dame. “Whatever roles Nik and Anthony assign me, I will definitely do. I’m also going to be working with youth hockey and running camps and clinics in the area.”

“This last year was quite the change of scenery going from college to working with youth sports but I loved it. I specifically worked with 12U and 14U and it was fun watching the kids develop from the beginning of the season to the end.”

Nik Passero is excited to have Ellis on board.

“She is going to run skills sessions with our team and will be as much of an assistant coach as anything,” he said. “Her skill set and what she is interested in is building our youth program. We want a better footprint in minor hockey with Fort Erie minor hockey, with Southern Tier, with Niagara North, with the Niagara Falls Rapids and Brock Jr. Badgers. She’ll take a little of the pressure off me and Anthony in that point building programs and running skills camps.”

Nik Passero feels the time is right to bring Ellis on board with players missing so much time due to the COVID pandemic.

“With everyone missing 18 months of hockey, they are going to be dying to get on the ice, so if we can make it affordable and useful — it’s not just about getting out there — if we can really bring something useful to the table it will benefit everyone,” he said.

Ellis feels skill development is crucial at all levels.

“I think hockey has become such a competitive game and it’s grown so much and lots of kids are getting involved,” she said.  “It’s the old saying that practice makes perfect and it’s so true. In order to become a great player you have to focus on skating, shooting, stick handling, puck control. Those skills are very important and all levels and any age, but specifically with youth it’s definitely important to work on those skills. They should be focusing on their skill set.”

Ellis has an impressive background.

Prior to her time in New Jersey, Ellis was an assistant coach with the NCAA Division 3 Castleton University Spartans women’s ice hockey team. She also had a noteworthy playing career for the Oswego State Lakers where she finished with 109 points in 106 career games and is the Lakers all-time point leader. She was a member of the ECAC (Eastern College Athletic Conference) west all-rookie team in 2015 and ECAC west all-academic teams in 2016, 2017 and 2018. She was the Lakers team captain during the 2017-18 season and was a three-time Oswego State women’s hockey most valuable player in 2016, 2017 and 2018.

She graduated from Oswego with a degree in business administration and has a Masters of Education from Castellan.

Ellis can’t wait to get started.

“I’m excited to help grow the game of hockey in the Fort Erie area,” she said. “Whatever they want me to do, I’m open to doing.

“I love coaching so I want to be involved in coaching for the rest of my life. If it could be a full-time thing, it would awesome.”