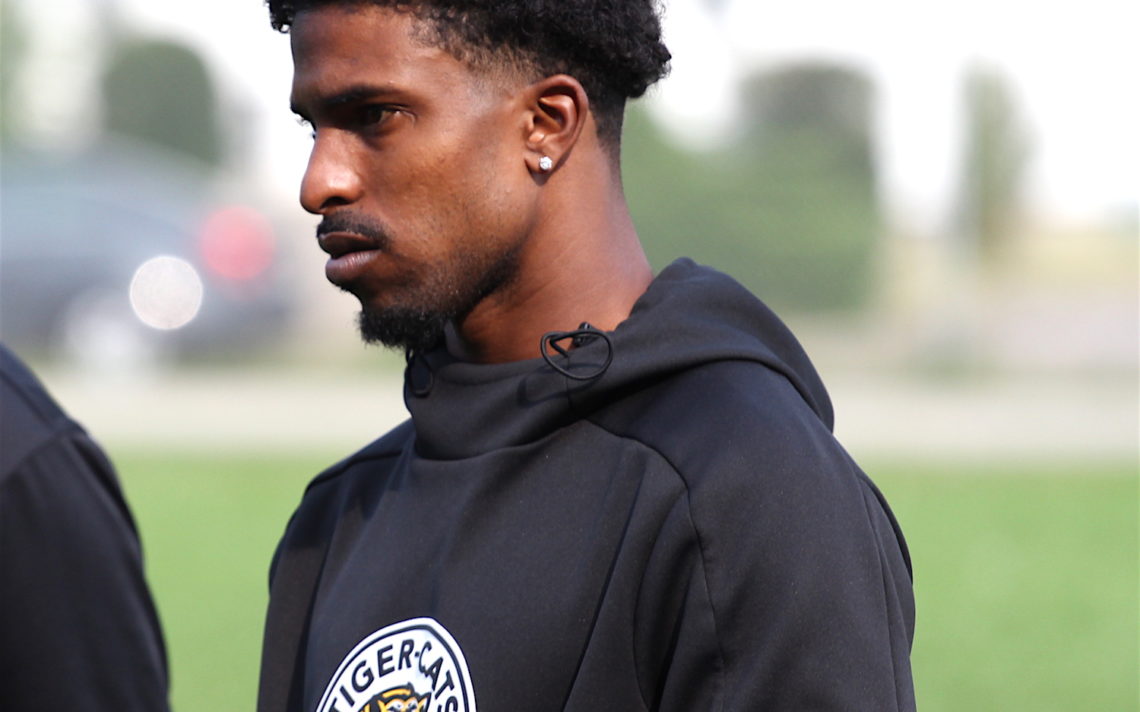 Soft-spoken Jaylen Saunders had the attention of every member of the St. Catharines Collegiate football team Tuesday.

The former fourth-round pick of the New York Jets is the latest Hamilton Ti-Cats mentor for the Saints following in the footsteps of C.J. Gable. He spoke to the team during its practice and will help out this season as a guest coach.

The 24-year-old Californian has plenty of life experiences to talk about since being released after playing three games with the Jets in 2014. He made the appearances on the practice roster of several NFL teams before being discovered earlier this year by Hamilton in a spring league scouted by NFL and CFL personnel.

“It’s a chance to show my world to some of the younger guys and push them in the right direction with school and sports, whatever the case may be,” the former Oklahoma Sooner said. “I’m just a positive guy and I like to share the positive things in life.”

He hopes to share messages about life on and off the football field.

“Football or other team sports bring you together environment-wise and it helps you with life skills being on a football field with great friends,” he said. “I still have high school friends to this day and we still talk about games when a player got hit or something else happened. Team bonding trickles down in life and you never know how it plays out.”

He can’t wait to share his thoughts with the Saints.

“I’m looking forward to putting my word out and hearing my voice heard a little bit.”

The Ti-Cats have been running the mentorship program since 2012 and Collegiate head coach Nathan Greene has loved what the program has provided to his players. He can’t thank Gable enough and expects a similar experience with Saunders.

“C.J. was outstanding,” Greene said. “He came to practice and was like another coach. He had a real personal message to the kids as far as all the trials and tribulations he had in his career, trying to hang on in the NFL, dealing with his family and how to persevere and overcome the issues that everyone has in life.”

Football is just part of the equation.

“They are there to teach (football) skills but the overall message is more about life skills,” Greene said.

Players are supposed to attend three practices and one game a season for the teams they are mentoring but Gable went above and beyond, attending five or six practices and donating tickets to Ti-Cats games.

“The kids really bought into the whole relationship with him and they followed him on Facebook and Twitter,” Greene said.

Saunders will likely attract the same loyal following. After being released by the Ti-Cats in preseason and assigned to the practice roster, Saunders was promoted to the active roster two weeks into the season when star receiver Terrence Toliver suffered a knee injury. He quickly became one of Hamilton’s most trusted receivers.

“One door closes and another one opens and it literally it’s always like that,” Saunders said. “I’m sorry for TT and what happened to him and I hope and pray that he has a speedy recovery and comes back playing better than he was.

“It’s an opportunity that was given to me and I’m thankful to God and the entire Ti-Cats organization.”

The TiCats organization, thanks to sponsorship from Coca Cola, tries to get out to about 25 high schools with one mentor assigned to each team.

“It’s a really good way to get out and grow the local sport around us,” said Tyler MacKay, a community relations staffer with the Ti-Cats. “It has always been successful and the guys have been great when they go out to these things.”

Collegiate opens its season by travelling to Grimsby Thursday for a 3 p.m. game.