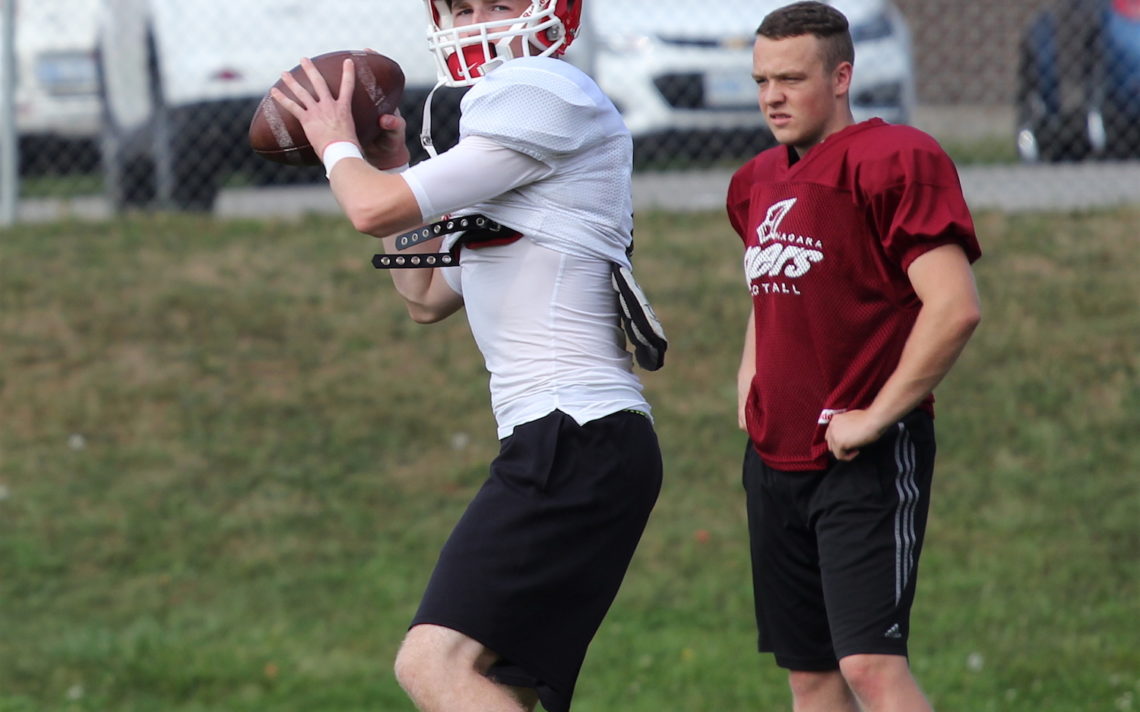 When we last watched high school football, the Denis Morris Reds were going unbeaten in Niagara Catholic play and the dominating A.N. Myer program was putting the finishing touches on its third straight OFSAA Bowl.

With the high school football season set to launch this week, it’s time to take a look at the senior leagues and figure out how the schedules work and who is contesting the titles in various divisions.

This year’s Niagara Region High School Athletic Association Division 1 consists of A.N. Myer, Sir Winston Churchill, Centennial, Greater Fort Erie, Thorold and Stamford/Westlane. The teams will play each other in a five-game regular season with the the two top teams earning a bye into the semifinals. The bottom four teams at the end of the regular season will play in the quarter-finals. The winner of the championship game will advance to the Niagara championship and the Ontario Federation of School Athletic Associations bowl playdowns. The one caveat is Centennial and Stamford/Westlane are ineligible to advance to the OFSAA level because they are using players from other schools (Centennial picks up players from E.L. Crossley). If one of those teams wins the league, the top eligible team will move on to play the Catholic representative.

Sir Winston Churchill coach Peter Perron describes the new league as competitive with a lot of good teams. He expects Myer to be strong again and feels Greater Fort Erie will be tough.

“I like the five-game regular season,” Perron said. “You are going to get seven games and that suits me fine. It also gives us the opportunity to work towards a SOSSA championship and play at the next level.”

Division 2 this year includes Eden, Governor Simcoe, Grimsby and St. Catharines Collegiate. The four teams will play each other twice and then move on to the semifinals and finals. Grimsby makes a welcome return to senior football under the head coaching of Zack Silverthorne, who ran an excellent program at South Lincoln before the school was closed.

“It’s great to see and when they build the new school out there, I’m sure Zack will be there and hopefully they will be running a junior and senior program,” NRHSAA football convenor Sandy Wilkes said.

At the Niagara Catholic Athletic Association level, the league will be divided into two divisions. Lakeshore Catholic, Saint Paul, Saint Michael and Notre Dame will make up the South Division and the North Division will consist of Denis Morris, Saint Francis, Holy Cross and Blessed Trinity. The teams will play each other once within the division and then play a further two crossover games against the other division. The top two teams in the North will play a pair of games versus the top two teams in the South and the bottom two in each division will also play. At the end of the five games, the teams will be seeded for the playoffs. Any ties will be broken by the teams’ cumulative record. All eight teams will compete in the quarter-finals and the champion will move on to play the public representative in the Niagara championship.

“We decided that (format) was more competitive and equitable and would allow for the growth of the sport,” said Dino Germano, NCAA athletic convenor.

Denis Morris head coach Rob Battista has no issue with the new format.

“You want everyone to be competitive and if this is the way to do it, then we are all for it,” he said.

Denis Morris graduated a lot of star players and will be small on the lines, but they have a key component in returning quarterback Travis Arp.

“It’s a quarterback league and we are blessed to have a seasoned quarterback,” Battista said.

Last season, the NCAA senior teams played each other once in the regular season and then the top four teams advanced to the semifinals. Denis Morris went unbeaten in NCAA league and playoff action and then lost a thrilling 31-24 decision to A.N. Myer in the Niagara championship.