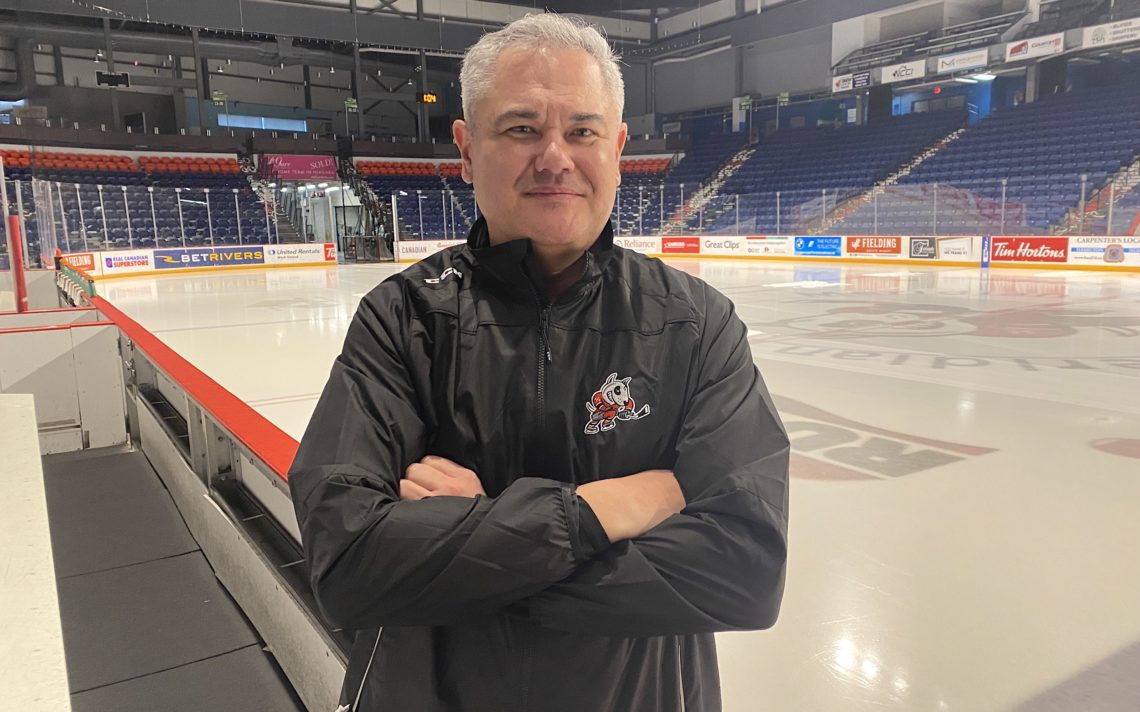 The new coach of the Niagara IceDogs has a varied, successful and impressive background, both as a player and behind the bench.

In fact, before sitting down with BPSN for an interview Wednesday, Ryan Kuwabara politely asked if he could finish a text message to Pittsburgh Penguins general manager Ron Hextall.

The 50-year-old Hamilton native was an assistant coach with the Penguins ECHL affiliate in Wheeling until Sunday when he coached his last game. He then hopped in a car and drove home Monday before meeting the IceDogs for the first time Tuesday.

“We had a meet and great and I introduced myself and how I like to play,” Kuwabara said. “It was great. Guys seemed happy. I wasn’t sure how they would take it at the start but a great group of kids and I had a chance to meet the staff and that went well.

“We have a great group of guys in there with a passion for the game and that’s super important.”

Kuwabara realizes it will be process before he can put his stamp on the team.

“I’m not looking to come in and change the whole landscape of what we’re going to do and how we’re going to play,” he said. “It’s going to be incremental changes as we move along and as I see more and more how we play and if I see areas where we can be better, that will be the focus point at the start. We’ll tweak little things as we go along.

“I like to play fast and out there and puck possession and a little bit of physicality. I don’t want to see us pushed around. I want to make it uncomfortable for teams to come into our building and when we’re on the road.”

Kuwabara will coach his first game for Niagara Thursday when the IceDogs host the Hamilton Bulldogs.

“It’s right into the fire for me,” he said. “It’s funny because my daughter asked who do we cheer for?”

Kuwabara becomes the third head coach for the IceDogs just 21 games into the season following Daniel Fitzgerald, who was let go following a 4-10-3 start, and interim coach Jeff Angelidis, who guided the team to 2-2 record.

“I’m excited to get on with these guys. The more interactions we have with each other the better idea what kind of person they are and what kind of character they have and how we can help them be better players,” Kuwabara said. “The whole thing now for is to get our feet under us and build a foundation and then start getting better every day.

“I have some familiarity but a lot of the guys are new. It’s just watching game tape and talking with the staff to see what we have to work with and see where guy’s strengths are.”

Kuwabara originally touched base with IceDogs owner/general manager Darren DeDobbelaer in the summer when he purchased the team and again after Fitzgerald was released.

“I knew about Darren through the junior B loop when I was in Ancaster. I put it out there and once Fitzy got fired we had a conversation to see where he was and where I was and it went from there,” Kuwabara said.

Before coaching pro, Kuwabara spent two seasons as an associate coach with the Flint Firebirds and two seasons with the Saginaw Spirit as an assistant coach. Earlier on in his coaching career, he earned the Tom Kelly Memorial Award as the Coach of the Year in the Greater Ontario Junior Hockey League’s Golden Horseshoe Conference during the 2013-14 season with the Ancaster Avalanche.

As a player, he was drafted in the second round (39th overall) by the Montreal Canadiens in the 1990 NHL draft and signed a three-year NHL entry-level contract with the team to play in the AHL with the Fredericton Canadiens. The majority of his professional career was spent in Japan, where he played eight seasons for Kokudo of the Japanese Ice Hockey League and represented Team Japan internationally. Prior to that, Kuwabara was selected in the first round (eighth overall) by the Ottawa 67’s and tallied 240 points in three seasons with the team.

He also played for legendary OHL coach Brian Kilrea as well as Dave King in Japan and said he leaned a ton this season in Wheeling under head coach Derek Army as well as others in the Pittsburgh organization.

“Pittsburgh streamlined a synergy plan. They play the same system from the NHL to the AHL to the East Coast League so they know what they’re doing,” Kuwabara said. “I have some pedigree there and there’s the OHL guys you meet and respect. You pick their brains for little things. Everyone is going to give you a little nugget of information and it’s how you go about it.”

He was enjoying his time in pro but a chance to be a head coach was too much to pass up.

“It’s been my goal ever since I left Ancaster to go to the OHL to work towards being a head coach,” he said. “I felt for me to keep progressing up the coaching ranks, it’s one of the stops you need on your resume to help facilitate moving up. The OHL is such a great league and for players and coaches. It’s was a tough decision to leave them but they understood. It’s an opportunity for me to be closer to home and to be in the best junior league in Canada and in the world, I think.

“There were too many boxes that got checked.”

If you liked this story or one of the 4,600 other stories found on our website, please consider hitting the Support Us button on the right-hand side of our home page and making a PayPal contribution to our website. Your support would be much appreciated. If you are a business owner, please consider advertising on our site. Our rates are reasonable and we provide plenty of exposure for your business. Contact bpotrecz@outlook.com for more information.