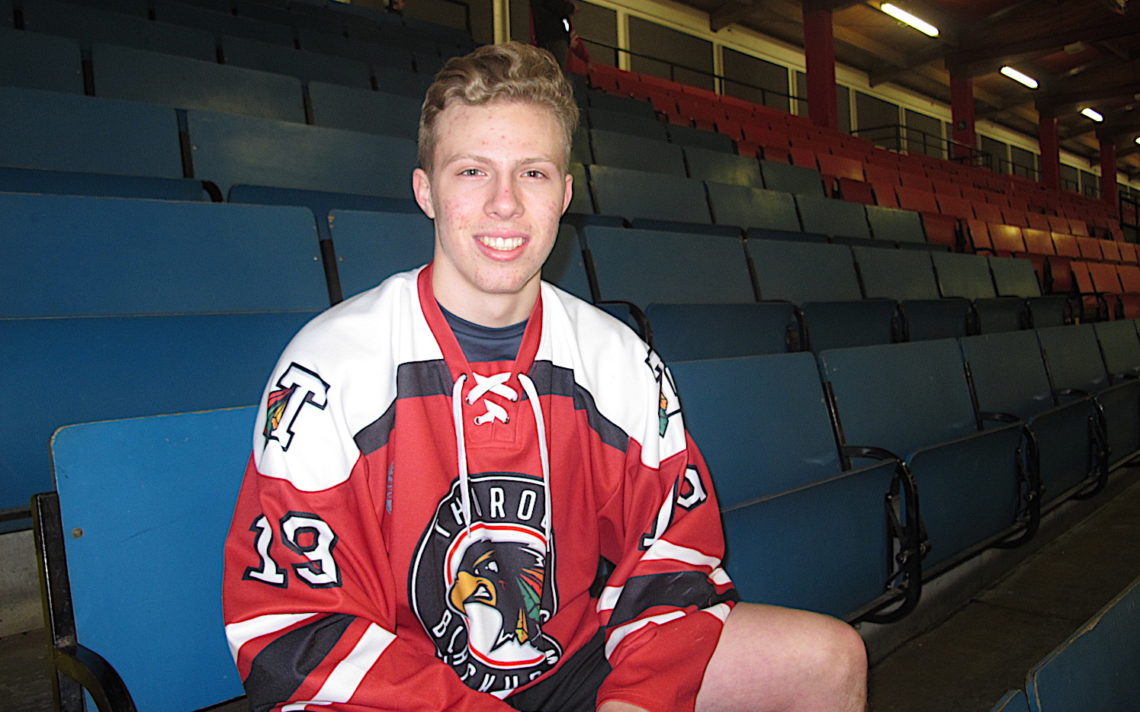 Matt Maidens and the Thorold Blackhawks have been a perfect fit for each other.

The 17-year-old Niagara Falls native was coming off a solid season as a rookie at the junior C level with the Niagara Riverhawks and was looking to make another step up the junior hockey ladder.

Enter Blackhawks owner/coach Scott Barnes, who was looking to rebuild the roster after the Hawks failed to finish the season last year. Barnes noticed Maidens playing summer hockey in Toronto and immediately recognized him as someone who could help the Hawks.

“I let him know he would have a really good opportunity here to be a big part of our team,” Barnes said. “We were a team where I knew he was going to get the ice time he needed so it worked out well.”

Maidens came to camp and quickly impressed Barnes with his speed and offensive instincts.

“He had a real good training camp,” Barnes said. “He’s good really good vision. He’s a really smart player and he’s got good hands. He has a knack around the net and he brings a lot of offence. Obviously there are parts of his game he needs to work on like any other 17-year-old.”

Maidens has made the most of his opportunity, scoring nine goals and 22 points in his first 32 games.

“The natural gifts he has, you don’t teach them and he’s been played in every opportunity to display those skills,” Barnes said. “He’s got lots of power-play time and in offensive situations so that’s worked out well for him.”

Maidens is glad he made the choice to join Thorold.

“I didn’t expect to have as good as season and I am having now. I owe a lot to my teammates,” he said. “The jump is pretty big. Guys are older and a lot faster.”

He was also quick to give credit to the Riverhawks for helping his development.

“I just developed a lot playing with the older guys because I was a 16-year-old,” he said. “The way people hit — it was very physical — and when I came to junior B, I was ready for it.

“When I went to junior C it was a confidence boost for me. I got a lot of experience there.”

Maidens, who hopes to continue to rise up the hockey ranks at either the OHL or NCAA level, is the nephew of local hockey instructor Darin Maidens and cousin of former NHL pick Jarrod Maidens.

“I learned a lot of stuff with them and they taught me a lot,” he said.

Barnes and Maidens agree on the next phase of his development — working on the defensive aspects of his game.

To that end, the Hawks have a rigorous practice schedule in addition to their games.

“When I took over this team, I wanted to run this as a really good junior program and be on the ice three or four times and week for practices and games,” Barnes said. “It’s a big change for a lot of these guys. It has helped our team adjust to junior B and helped the young guys with their compete factor having to bring it every practice. I’m not sure we would be where we are if we weren’t going as much as we are.”

Maidens, who attends Saint Paul in Niagara Falls, is aware the only way to get better is to put in the effort.

“It’s pretty hard practising five days a week. It’s a lot of hockey but you’ve got to keep working hard every day.”

Maidens will get a chance to strut his stuff before the scouts after being invited to play in the Greater Ontario Junior Hockey League Top Prospects Game next Thursday in Ancaster. Nick Gidney has also been selected while Devon Thibodeau and Mason Howard will play in the Future Stars Game.

The Hawks dropped a 4-1 decision to the Ancaster Avalanche Thursday at Thorold Arena to fall to 12-14-3-3 in their final game before the Christmas break.

The Hawks return to action Thursday, Jan. 4 when they host the Niagara Falls Canucks.