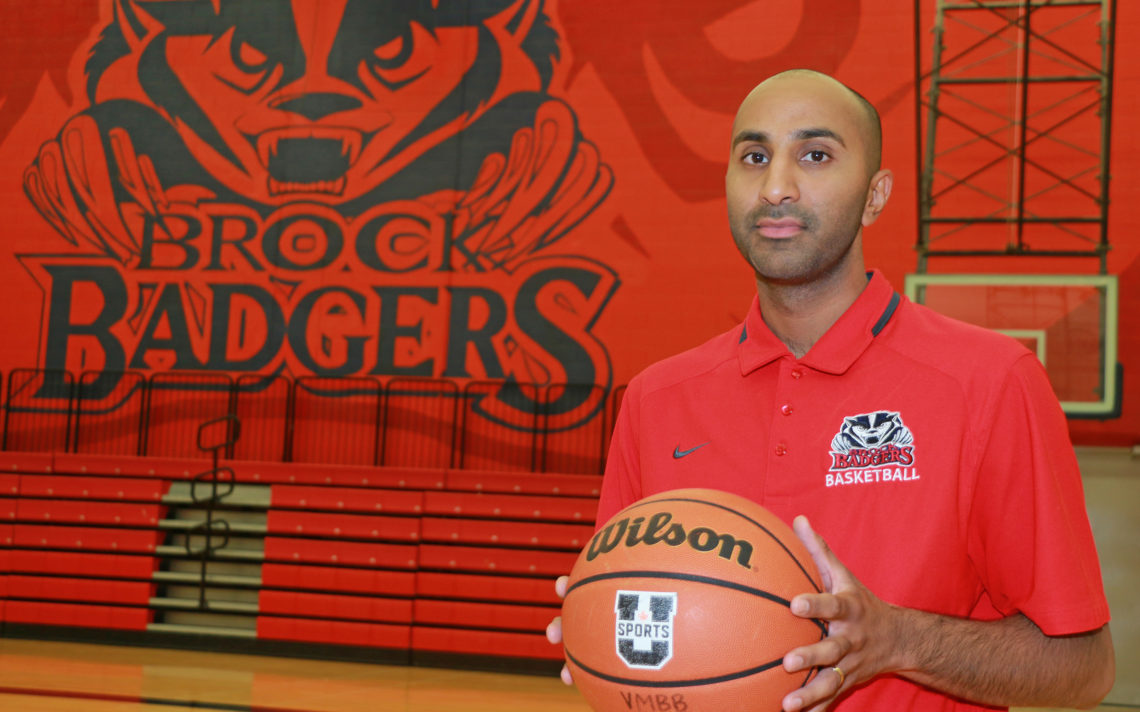 Madhav Trivedi has been announced as the interim coach of the Brock men’s basketball team. Photo special to BPSN.

Charles Kissi made sure he had the right man in place to take over as the interim coach of the Brock men’s basketball program.

Kissi, who is taking a one-year leave to become an assistant coach with the Toronto Raptors NBA G League affiliate, contacted Madhav Trivedi to inform him of the opening.

After being contacted by Kissi, the five-year assistant coach at McGill University met with Brock athletic director Neil Lumsden.

“We had an interview, we spoke about some things and a few days later, he (Lumsden) called me back and said it was a go,” said Trivedi, a former four-year veteran with the Ryerson Rams and a student assistant under Ryerson head coach Roy Rana.

The pedigree of the Brock program was a big motivator for Trivedi to take the job.

“There is a lot of tradition and history at the university, especially with the men’s basketball program,” he said. “They won the national championship when I was playing.

“As a player, when you stepped into the gym when the program was at its best, you felt the energy, the fans and the support around the team. It had a special feel to it.”

Trivedi feels Kissi had managed to recreate that environment in his time at Brock.

“Seeing what coach Kissi had done with the program is tremendous, but what was very appealing was the community behind the program.”

Trivedi watched some of Brock’s games on-line and was impressed by the hometown crowd, which Kissi calls the best in Canada.

“They’re crazy, they’re supportive, they’re excited and that’s what university sport should be,” he said. “You don’t get that a lot in Canada.”

The scout with the Israeli under-20 national team was interested in the position even with the possibility he could only be at Brock for one year.

“Opportunities like this don’t come up very often,” he said. “When there is a university that wants you, it is usually a good situation. Whether it’s a year or longer, it does not matter to me.”

Trivedi said it’s difficult to describe how he will differ from Kissi.

“He has done a great job in terms of the toughness level of  the defence and what they do and I think you can look how we played at McGill and we were very similar,” he said. “We were always ranked top three or four in the country in defence.”

“It will be interesting to see how we come together offensively because every year is different, we graduated Dani Elgadi and he was an important piece of the offence,” Trivedi said. “We will see how things go in training camp and how we go from there.”

He will tailor his offence to the personnel he has on his roster.

The main tenet of his coaching philosophy is playing hard.

“We are going to compete on night-in and night-out basis and that is my philosophy,” he said. “We are going to work hard every day at getting better at the smallest things possible and hopefully those small things become bigger and bigger as the year goes on.”

As for his demeanour as a coach, Trivedi will do what’s required to lead his squad.

“It’s whatever the team needs me to be in a specific moment,” he said. “As coaches, we are always trying to get the most out of our teams and whatever a team needs, they’ll get.”

His first steps as a coach are to get to know his players and get acclimatized into the Niagara community. He ran his first practice Tuesday and liked what he saw.

“There’s a lot of returning players and they have a lot of talent,” he said. “They have some new players with talent and we have to figure out how to put it all together so that it’s a good roster.”

Despite the possibility of his appointment being for one year, Trivedi will recruit like he is coming to Brock for the long haul.

“We will be out there recruiting hard.”

Lumsden said Brock is fortunate and excited to land Trivedi.

“He brings a number of great qualities that align well with how Charles has built this program,” he said. “Our expectation is that we continue to elevate the program, which matches the existing trajectory of the players, assistant coaches and Brock Sports.”

Kissi announced he was taking a leave of absence July 26 and Brock moved quickly to find a replacement. Trivedi’s rapid hiring is in stark contrast to Brock’s snail-like pace in finding a replacement for Brock women’s basketball coach Ashley MacSporran. MacSporran and Brock parted ways April 2 and a replacement has yet to be announced.