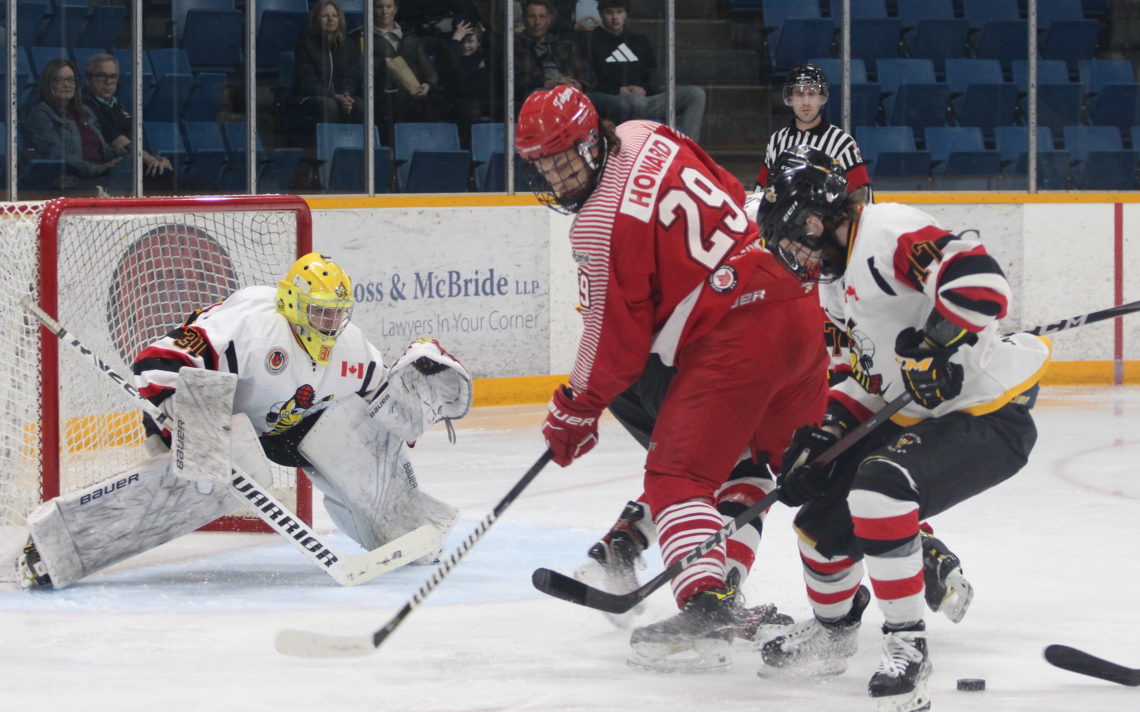 The St. Catharines Falcons have made it their mantra to live in the moment this season and not get too high after a victory or too low after a loss.

Just minutes after dropping a 4-2 decision to the Hamilton Kilty B’s Wednesday night at the Dave Andreychuk Mountain Arena and missing an opportunity to win a championship, veteran Falcons defenceman Mason Howard was already looking forward to Game 6 Friday on home ice at the Jack Gatecliff Arena.

“(It would be) unbelievable to win in that arena Friday night,” Howard said.

Howard then took it a step further.

The Falcons lead the Greater Ontario Junior Hockey League, Golden Horseshoe Conference best-of-seven final 3-2 and can capture their 17th league title and first since the 2012/13 season and can advance to the Sutherland Cup round-robin playoffs with a victory in Game 6. Game 7, if necessary, would be back in Hamilton Sunday night.

Falcons coach Tyler Bielby made it clear a win is far from assured simply because the game is being played in St Catharines.

“We have to worry about winning that first shift and let the rest take care of itself,” he said. “There’s no question it’s a great opportunity for these boys to go back on their home ice and play for those cowbells and the great fans.”

The Falcons, coming off a dramatic 3-2 double overtime win at home Tuesday, didn’t have quite the jump of the Kilty B’s, who were fighting for their season.

“They capitalized on our mistakes tonight.”

Howard said the Falcons need to get back to the basics and the party will be on.

“We just have to buy into our system and send pucks to the net and send bodies to the net. We play the best when we have all the guys going the same way and we didn’t have that tonight,” he said.

“It’s tough to send 20-year-olds home. These kids love the game and that’s why the fourth win is always going to be the toughest one, because you’re sending kids home,” he said.

He also did not want to discount the Kilty B’s, who finished with the top winning percentage in the entire GOJHL in the regular season.

“They finished in first place for a reason,” he said. “The opportunities we gave them, they scored. We let off the gas a bit in the second period and that ended up being the difference.

“It’s the two best teams. It’s not supposed to be easy. You just regroup and be ready to go Friday night.”

Following a scoreless first period Nathan Phillips gave Hamilton a 1-0 lead two minutes into the second period with his eighth of the post-season.

Noah Reinhart’s ninth of the playoffs on a power-play early in the third drew the Falcons back even at 1-1 but the Kilty B’s responded with a pair of goals one minute apart to take a 3-1 lead. Nate Shirton got one back when he scored at 18:26 with goaltender Andrew MacLean pulled for the extra attacker before Nolan Underwood scored into an empty net at 19:46.

Up next: Game 6 Friday in St. Catharines at 7 p.m. Game 7, if necessary, Sunday in Hamilton.