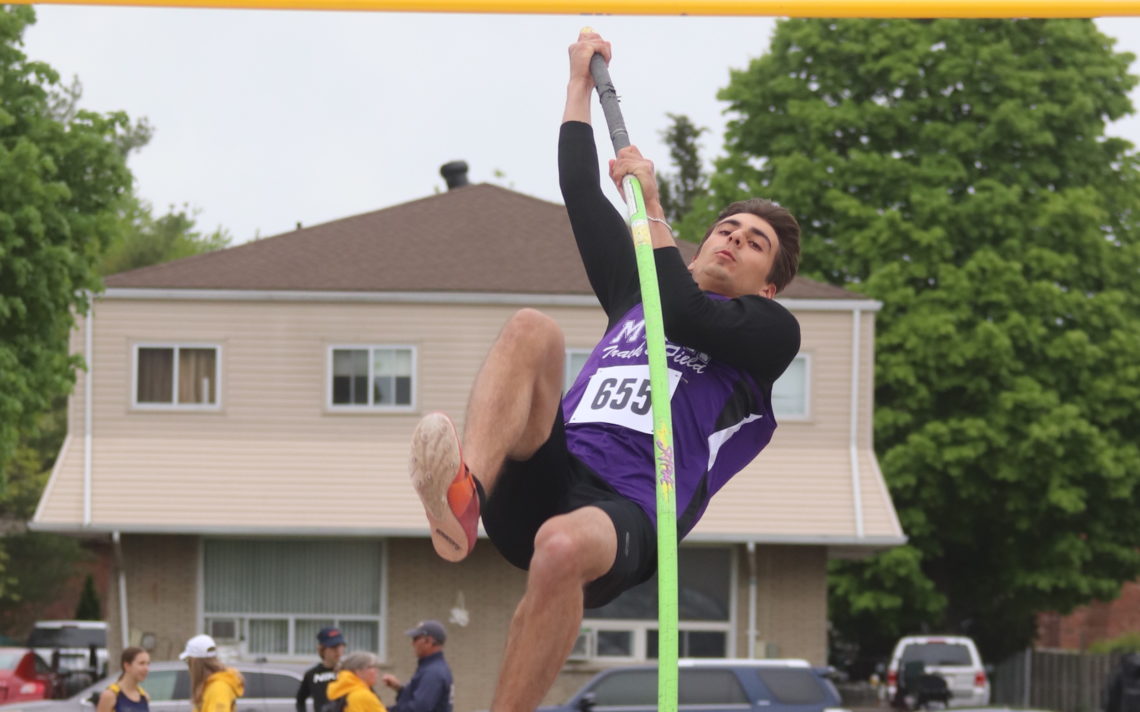 Michael Ivanov is preparing for another hectic day Thursday at the South Regionals track and field meet at Welland Centennial.

The 12B student at A.N. Myer Secondary School in Niagara Falls will be competing in the senior boys high jump and pole vault. The high jump is scheduled to begin competition at 2:45 p.m. and the pole vault is slated for 3 p.m.

It is the exact same schedule as last week’s Southern Ontario Secondary Schools Association track and field meet held at Welland Centennial in which Ivanov won both events. It was his third and fourth SOSSA titles after winning SOSSA triple jump in his Grade 9 and 10 years.

“It was a little challenging,” the 18-year-old Niagara Falls native said about SOSSA. “I had to go from one end of the field to do one jump and then go all the way to the other end. I sprinted back and forth and I am not going to lie. It was a little anxious and jittery but I had to keep it calm, be composed and do my best out there.”

He did just that, winning the high jump with a leap of 1.85 metres and pole vault with a jump of 2.9 metres.

“It wasn’t easy but it was well worth it winning the gold medals,” the Thorold Elite Track Club member said.

His personal bests are 1.95 metres in high jump and 3.4 metres in pole vault.

“They had to shut us down for pole vault because of the weather so I couldn’t go as high as I wanted. I was hoping for a new PB that day.”

His goals for the spring are to make it to the Ontario Federation of School Athletic Associations championships and medal.

“Hopefully gold because I like that colour the best,” Ivanov said.

Before COVID shut down high school track and field for two seasons, he was fifth in triple jump at OFSAA in Grade 9 and sixth in high jump in Grade 10. He is ranked in the top five in Ontario and high jump and long jump. He finished second at SOSSA in long jump with a jump of 6.63 metres.

This fall, Ivanov is heading to either Brock or Guelph for school and to compete in track and field.

“I haven’t decided if I want to go somewhere or stay local,” he said. “The program I am going to will have to be really good and the athlete training environment has to be excellent too. I will decide by what comes from the heart.”

Ivanov has lofty goals for his track and field future.

“I want to definitely make the Olympics. That is first on the bucket list and from that I want to compete in as many nationals as I can and hopefully a few world championships.”

He has been working hard to make those dreams a reality.

“A lot of clubs shut down during the pandemic but our club was still going. We did at-home weight training, went to different tracks to do some sprint work and, at one point, we were doing high jump in a teammate’s (Carson Gauthier) driveway. That was really neat because the neighbours would come out and watch us.”

He is pushed to train almost every day by past results.

“There was a time in Grade 8 when I didn’t really even make a mini school meet and that was motivating to me that I couldn’t even make something that small,” he said. “Now I am one of the best in the province if not Canada. Looking back from where I came from and seeing where I am now, keeps pushing me every day.”

Thorold Elite coach Steven Fife describes Ivanov as a talented athlete, who was able to enjoy some successes playing volleyball and basketball last fall and winter and is now getting back into his passion for track and field.

“He took an interest in pole vault last summer and has shown a natural ability for the event just like all of the other jumps he has done. He understands it technically and is also physically gifted with a body type that is well-suited for vaulting and jumping,” Fife said. “It was a good time to pull out a personal best in long jump (at SOSSA), a jump that is currently tied for fourth in the province. When he sets his mind on a goal, he pursues it with determination and great discipline.”