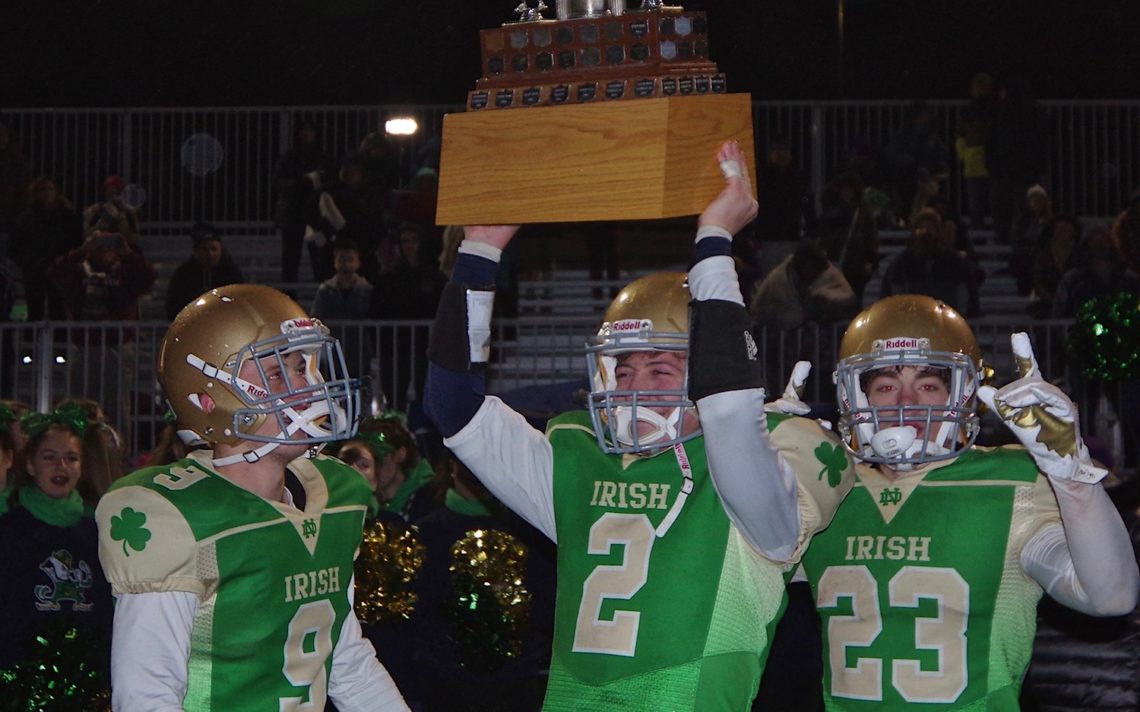 Ever since defeating Lakeshore Catholic in the Niagara Catholic Athletic Association semifinals, Bisci had been preaching commitment and history to his squad.

“The last time we beat Myer in a championship game, I was the quarterback,” he said. “I know the date and the time and I mentioned Nov. 12, 1987 to them again and again.

“Thirty years later and three days, here we are again. They will remember this forever — for the rest of their lives.”

It was a worst to first scenario played out in real life for the Fighting Irish.

“Brandon Graziani, Jonah Gruarin and Jake Porter, all those guys that were around when we were 0-6, they stuck around and now they are 9-0 and Niagara champions,” Bisci said. “We beat a team that hadn’t lost in 28 games.”

Bisci motivated his team by using a headline from bpsportsniagara.com that said ‘28 straight wins and counting for Marauders’ after Myer beat Greater Fort Erie in the Niagara Region High School Athletic Association final.

“I told our guys that they aren’t counting any more,” Bisci said.

It was fitting Notre Dame’s game-winning touchdown was scored with 37 seconds remaining by Graziani, who was named the offensive MVP of the NCAA league.

“The best player in Niagara at the end of the day was the player that scored the winning touchdown,” Bisci said.

It almost never happened as the 18-year-old quarterback couldn’t practice all week because of a bulging disc in his back and a sprained shoulder.

“He was frustrated, but I told him he wasn’t going to hurt it any more than it was and to just grit his teeth and go,” Bisci said.

Graziani went to physiotherapy every day leading up to the game but wasn’t sure he would be able to play.

“I was a little worried at the beginning of the week, but we always knew that I was going to play,” he said. “I was going to give it a go and try it even if I couldn’t.”

Graziani has been a key runner all season for Notre Dame, but he didn’t look like himself Wednesday.

“I couldn’t really cut but it didn’t hurt that much,” he said. “I just had to get used to it.”

After the game was over, Graziani’s father Gary presented him with a WWE championship belt.

“It was like (Green Bay Packers quarterback) Aaron Rodgers and when the Houston Astros won,” he said. “Every championship team gets a WWE belt.”

Graziani didn’t need a belt to realize how special the moment was for him and his team.

“It’s an awesome way to end high school and I am proud of all these guys,” he said. “The defence played a helluva game today and it feels very surreal.”

Myer led 3-0 at the half and 10-6 going into the fourth quarter but the Irish out-scored the Marauders 14-3 in the final quarter.

“They are a fantastic team and I think they are going to represent Niagara very well,” Myer coach Dave Buchanan said.  “But I am proud of our guys. They worked hard all year and it’s a grind.

“We are excited,” Buchanan said. “The structure is there and you have seen it grow. We know we are going to be back, but I feel bad for the guys that this is their last game in purple and white.”

It has been a long time since Buchanan has tasted defeat, with Myer’s last loss coming late in the 2014 regular season.

“I’m not going to enjoy it very much and I know I didn’t enjoy it when we were getting our butts kicked,” he said. “I don’t intend to ever go back there.”