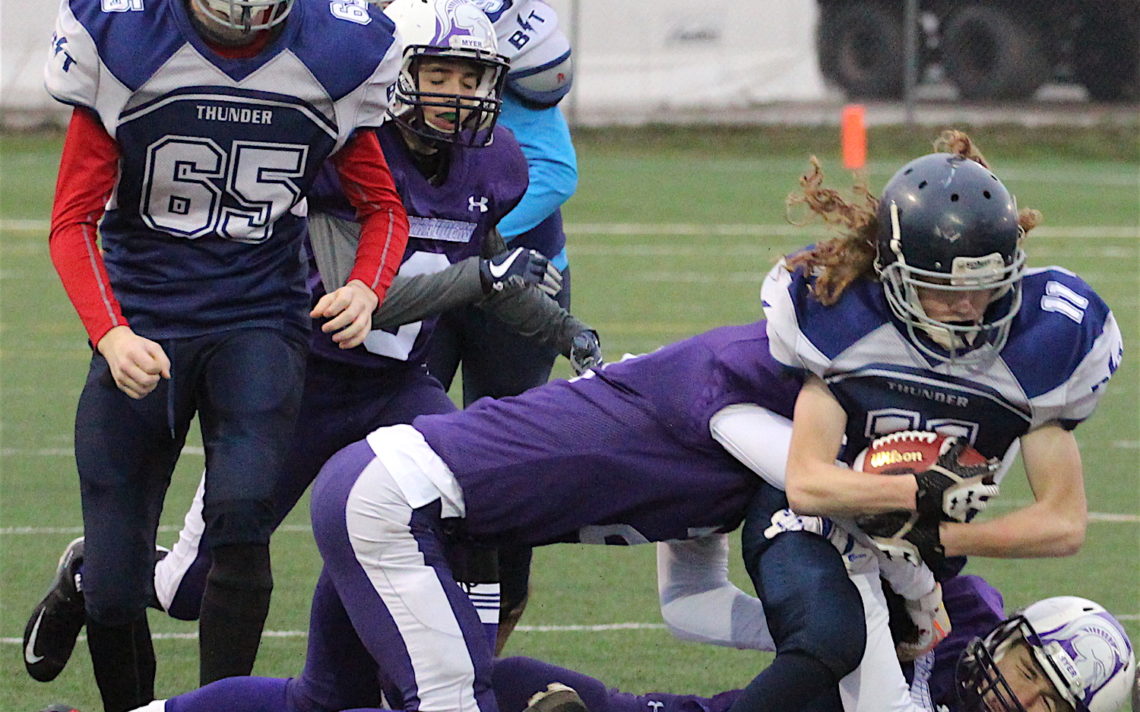 Among Myer’s three majors were a 100-yard kick return by Kyle Qua and a 95-yard TD pass from Jacob Burke to T.J. Cronkwright.

“We had a couple home runs and a couple of big plays that we needed to win,” Myer coach Dave Lupish said.

While the offence was nice, Lupish gave the defence credit for the victory.

“They started out rough but they really tightened it up,” he said. “We pretty much shut them down, but give them credit too. They shut us down.”

“A lot of our Grade 10s wanted redemption from last year and we started last week with Fort Erie and this game now,” Lupish said.

One of those Grade 10s earning redemption was Burke. The 15-year was the backup quarterback with the team last year and also filled in wherever he was needed, including wide receiver, safety and fullback.

“When we lost the championship the first time to Fort Erie, it was heart-breaking, but when we played them last week it was an amazing game.”

Like his coach, Burke credited his team’s defence for being the difference Wednesday.

“We switched it up a lot,” he said. “We put big kids on the line who hadn’t played defence before and we shut them down.”

It was a great move by an excellent coaching staff.

“Our coaches are great,” Burke said. “They work us hard every day.”

The Thunder led 11-7 after the first quarter and 14-7 early in the second quarter before the Myer defence took over and held the Thunder to only 70 yards of offence in the final two-thirds of the game.

Thunder coach Brad Hubbard pointed to the 100-yard kick return for a score by Myer in the first quarter right after Blessed Trinity scored on its first possession as an important moment in the game.

“Then it became a defensive battle and it came down to a few mental mistakes,” he said. “But all credit to them. They made the big plays when they needed to.”

Blessed Trinity went 2-2 in the Niagara Catholic Athletic Association regular season and got hot at the right time to make it to the Niagara Bowl.

“Our team is resilient and mentally tough,” Hubbard said. “We lost to Notre Dame on the last play of the game on a Hail Mary and we lose next next week to Saint Paul by one after we miss a field goal.”

BPSN Star of the Game: Kyle Qua with a key TD.