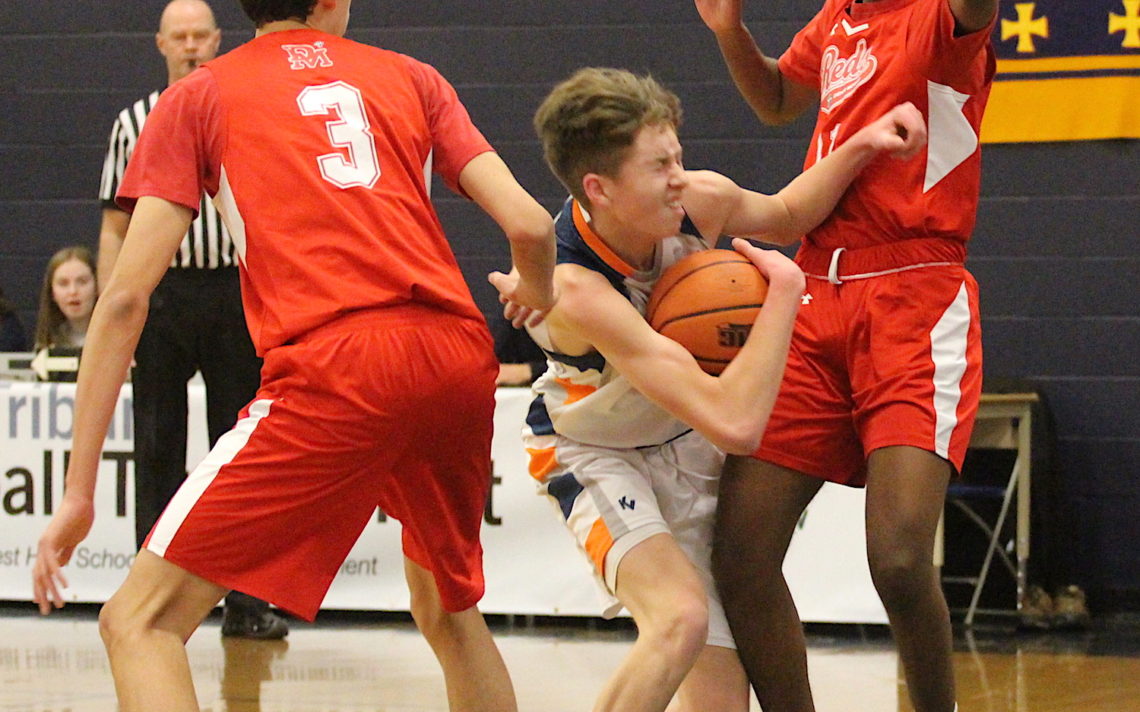 Rovenston Jean-Baptiste is hard to miss on the basketball court.

“Ro might be the most athletic kid in the school,” Notre Dame coach Mark Gallagher said Saturday morning, after the Fighting Irish knocked off the Governor Simcoe Redcoats 76-57 in the championship semifinals of the 63rd Annual Welland Tribune Basketball Tournament.

“He is so athletic and sometimes his basketball skills are stuck behind his athleticism but when he’s feeling right, he does things on the floor that almost no one else can do.”

And he does his thing on offence and defence.

“He gets rebounds no one can get, he can get to the basket when no one else can and he is a great. great athlete,” Gallagher said.

Jean-Baptiste scored 10 points in the semifinal win over Simcoe, two nights after leading his squad with 20 points in a quarter-final victory over Thorold. 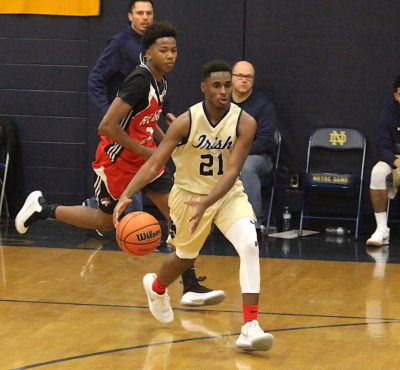 The 17-year-old is a multi-sport athlete at Notre Dame. He played slot, kick/punt returner and defensive back on the Irish’s championship football team and competes in high jump and the 100 metres during track and field season. In high jump, he qualified for the Southern Ontario Secondary Schools Association championships.

The Grade 12 student agrees his athleticism can, at times, overwhelm his basketball skills.

“I am moving faster than the ball and it’s kind of weird how I move,” the 5-foot-11 guard said. “I have a lot of hops but I need to work a little more on my basketball game.”

Jean-Baptiste describes his role on the team as a Jack-of-all-Trades.

“I rebound, pass the ball and score when I have to and help the team out,” he said.

In knocking off Simcoe, the Fighting Irish played maybe their most complete game of the tournament.

“We were a little bit sloppy late and they came back on us but we worked really hard,” Gallagher said “Obviously we had to control 21 (Rahim Bardi) and I thought we did a good job of that. And we made shots.”

The Irish were deadly from the floor, especially in the first half.

“We got ahead by 12 or 15 and we cruised home in the second half,” Gallagher said.

“Notre Dame is a great team,” Simcoe coach Shaun Feor said. “They are a very talented team and they shoot the ball well.”

Despite the semifinal loss, Feor was happy with his team’s performance in the tournament.

“The boys really worked hard in the tournament, including today,” he said. “We were down 25 or 26 at one points and we were still trying to claw back and get it down to 10 or 15.”

“It wasn’t about effort today. They put a lot of effort in.”

The Irish will play the Centennial Cougars in the championship final Saturday at 8 p.m.

Player of the game Kennan Larmond scored 27 points, including 23 in the first half, to power the Centennial Cougars to a 68-31 victory over the Denis Morris Reds Saturday morning in the championships semifinals of the Tribune tournament. 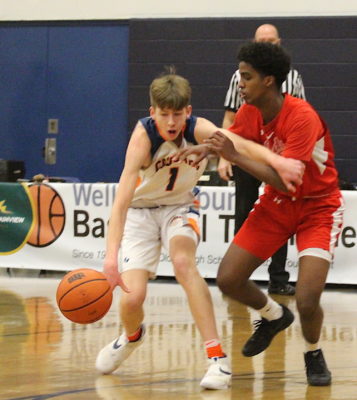 “We played well today,” Centennial head coach Phil Mosley said. “I was happy with the way we came out today but really it was our defensive intensity that gave us more opportunities to shoot the ball well.

“I was happy with the overall team performance.”

“We got beat by a better team,” Denis Morris head coach Randy Conlon said. “I don’t make excuses. They played well and we didn’t.”

The Reds, missing two starters, fell behind 25-8 after one quarter, cut the lead to 25-15 early in the second quarter before the Cougars built a 42-18 lead at halftime.

“They buried us early and then we cut the lead to 10 and I thought at that point we might be able to chip away and get it to five and then it was too much Kennan in the first half,” Conlon said. “Not to take away anything from the rest of the team but the kid is a great player.”