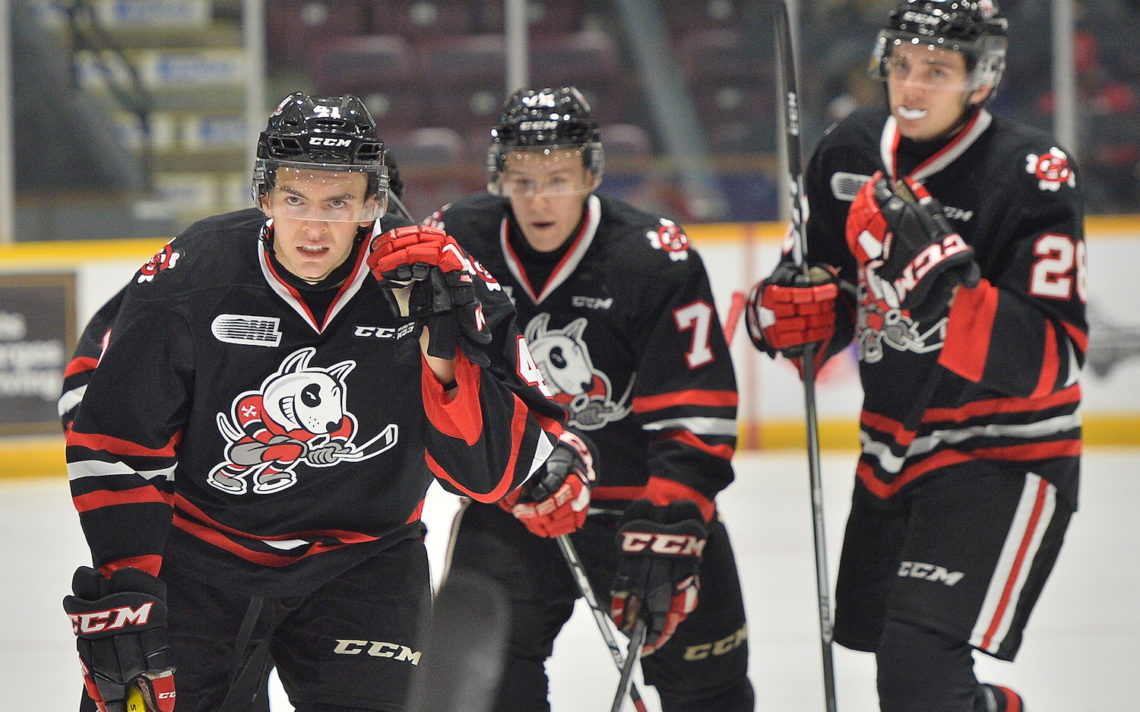 IceDogs top Colts to move into tie for first

The Niagara Ice Dogs continue to find ways to win.

The IceDogs turned in perhaps their worst period of the season in the opening 20 minutes and weren’t up to par in the other two, yet somehow emerged with a key victory.

The IceDogs topped the Barrie Colts 6-3 in an Ontario Hockey League game at the Meridian Centre and now find themselves tied for first place with the Colts with 51 points in the Central Division of the Eastern Conference.

“Honestly, I didn’t think it would happen,” Roberts said of his offensive outburst. “It was good to go out there and be able to get the win.”

Roberts completed the hat trick with 29 seconds to play when he cleared the zone and scored into an empty net as the Colts were applying pressure.

“I kind of just tried to throw it, clear it out, and it happened to go it. It was a real good feeling.”

The IceDogs were outshot 19-5 in the first period and at one point were without a shot while the Colts had 10, yet trailed only 2-1 after 20 minutes.

“I think they just came out real strong and maybe when you have a bad first shift or something, it’s hard to get back,” Roberts said. “We just went in after the period and we have a lot of character guys in the room and we stepped up and said we get this done and that’s what we went out and did.”

Roberts was proud of the way the club has been able to win on nights when they clearly were not their best.

“I think that speaks a lot to the guys in the room. We have a lot of character and we know whenever we’re down, we’re never out.”

The IceDogs reeled off four straight goals in the second to take 5-2 lead. Goaltender Stephen Dhillon was again magnificent, kicking out 46 overall shots and keeping his club in the game, particularly early on.

“He was outstanding,” IceDogs coach Billy Burke said of his veteran netminder. “He made some great saves for us. Guys were blocking shots and when we needed him, he was there.

“It definitely could have got out of hand, but Stevie was great.”

Roberts said first place means a lot to the team, even at this juncture of the season.

Ice cubes: Kirill Maksimov (suspension), Willy Lochead (upper body), Daniel Nardi and Ian Martin were scratched for the IceDogs  . . . Mathew Hill and Luke Bignell did not dress for the Colts . . . Former IceDog Aaron Hayden was in attendance  . . . Barrie winger Jaden Peca is the nephew of former NHL centre Michael Peca  . . . The Montreal Canadiens had a pair of scouts in attendance.

The Colts dominated territorially for the first several minutes . . . Barrie had a 6-0 lead in shots in the first six minutes and a 10-0 lead nine minutes in  . . . Niagara’s first shot came with 8:11 remaining and after Barrie had 14 . . . Adrian Carbonara was assessed a game misconduct in the first period after being called for goaltender interference . . . Barrie held an 19-5 edge in shots.

The IceDogs continued to give the puck away in their own end. . . Eight minutes in the shots were 28-5 in favour of Barrie  . . . Stephen Dhillon made several spectacular saves to keep the game within reach  . . . There was a long video review before Johnson’s goal was confirmed . . . Singer now has a seven-game scoring streak . . . There was also a short video review following Roberts’ second goal . . . Barrie led in shots 33-19.

Barrie replaced starting goaltender Leo Lazarev with Kai Edmonds to start the period . . . The Colts rang one off the goalpost early on  . . . Fergus’ goal came with Kyle Langdon in the box for goaltender interference . . . Dhillon needed repairs to his helmet late in the frame.

Up next: At Erie Otters Saturday.