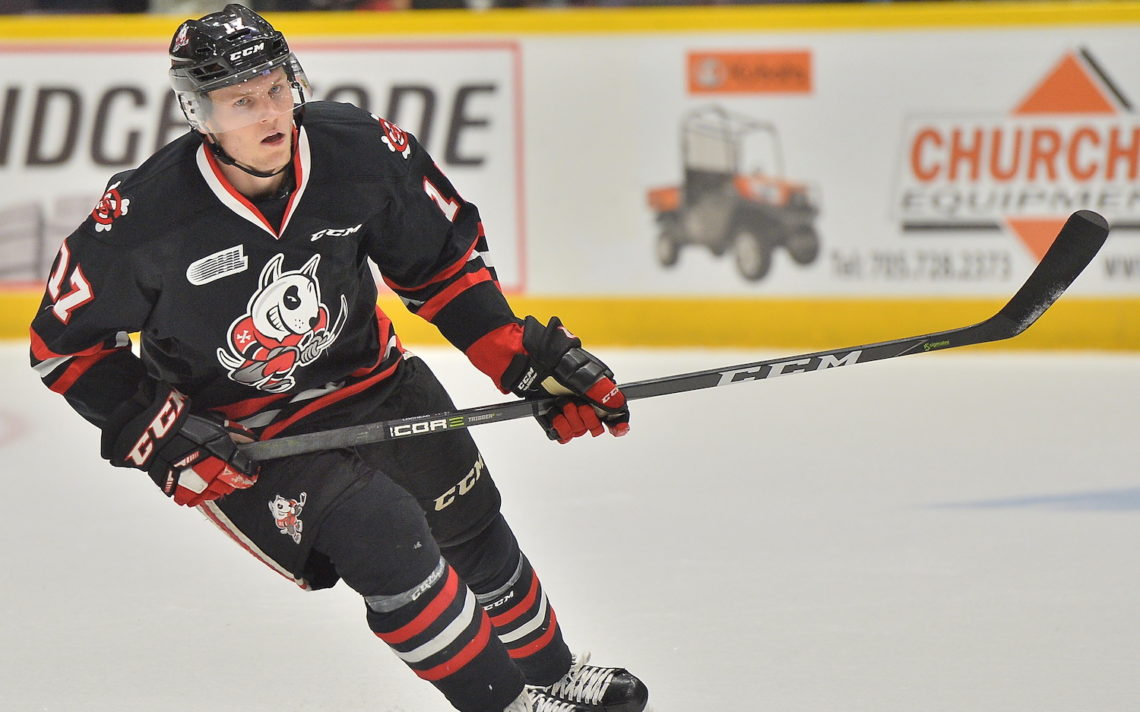 The Niagara IceDogs got an up close and personal look at the No. 1 ranked team in the country Thursday and came away convinced they can play with the big boys.

The Sault Ste. Marie Greyhounds showed why they are considered to be one of the favourites to win the Memorial Cup, defeating the IceDogs 4-3 in an Ontario Hockey League game at the Meridian Centre.

But the IceDogs did not go quietly, rebounding from a 4-0 deficit after two periods to come within a shot of tying the game in the dying seconds.

“It was another close game against a top team. It shows we’re right there,” IceDogs coach Billy Burke said. “We’re going up against Memorial Cup contenders. The Soo have been No. 1 in the CHL for almost every single week this season.

“They’ve lost five games and we’re there with a scramble at the net away from tying it and going to overtime.”

The Greyhounds were solid, efficient and workmanlike en route to their seventh straight win and improve to a league best 44-5-2-1.

The IceDogs have dropped five in a row to fall to 26-18-4-3. Things don’t get any easier for Niagara which travel to Sarnia Saturday.

The IceDogs looked a little overwhelmed early on but found a way to keep the game within reach, a trait they have displayed all season.

“Maybe we were a little star-struck early on but we hung around and never quit,” Burke said.

Burke felt the IceDogs were too lax without the puck early on, which led to some point-blank opportunites for the high-powered Greyhounds.

“I thought in the first period, turnovers were the definitely the issue. Too many times we just weren’t able to get the puck out of our end or turned the puck over at the blueline and they’re a good team.”

The IceDogs formulated a game plan to try and slow down the Greyhounds, who feature 10 NHL draft picks.

“We wanted to really jam up the neutral zone and try and take the rush way,” Burke said.

The IceDogs have had a tough stretch recently playing some of the top teams in the league.

“They’re all good. It’s adversity but it will make us better,” Burke said. “To go through a gauntlet like this, it’s only going to pay off in the long run.

“We don’t catch anyone by surprise. They’re ready for us and and they play us well.”

The Greyhounds scored the lone goal of an oddly quiet first period when Morgan Frost netted his 31st of the season. Sault Ste. Marie held a 12-10 edge in shots.

Sault Ste. Marie extended their lead to 2-0 early in the second period when Boris Katchouk scored on a nifty move on a penalty shot less than two minuets in. The penalty shot was awarded when the IceDogs covered the puck in the crease.

Frost’s second of the game late in the period on a power play concluded the scoring in the second.

The Greyhounds went up 4-0 with an early power-play goal to start the third before the IceDogs rallied. Willy Lochead got the comeback started five minutes into the period before Sam Miletic and Kirill Maksimov got Niagara back to within one.

Ice cubes: Kyle Langdon, Billy Constantinou and Ian Martin did not dress for the IceDogs . . .Conor Timmins,  Holden Wale, Phil Caron and Cole MacKay were scratched for the Greyhounds  . . . A quick count of scouts in the press room before the game was about 50  . . . Langdon and Timmins were honoured before the game on Thorold night  . . . Former Thorold Blackhawk David Cianfrini worked the game as linesman  . . . Niagara Falls native Mac Hollowell is having a solid season for the Greyhounds with 10 goals and 45 points.