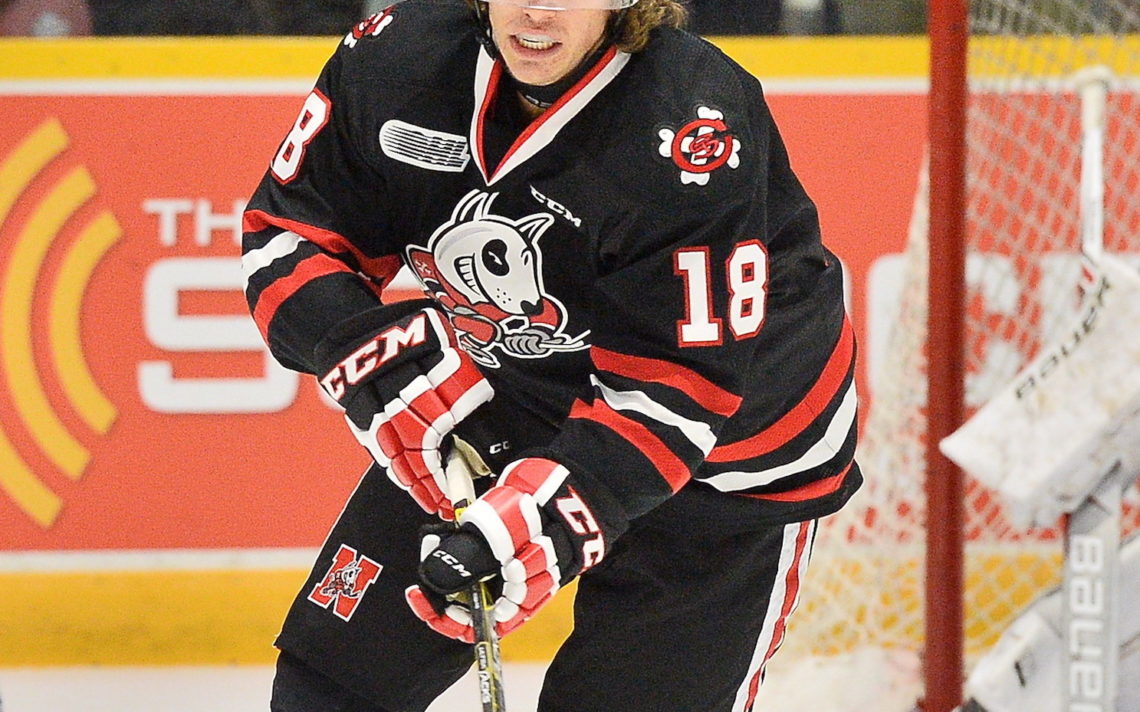 The Niagara IceDogs’ offence broke out in a big way Thursday night.

The IceDogs, who have struggled to score goals consistently, fired home a season-high eight to defeat the Flint Firebirds 8-2 in an Ontario Hockey League game at the Meridian Centre.

The win improves Niagara’s record to 30-23-7-3 and moves them into fourth place in the Eastern Conference, one point up on the idle Oshawa Generals.

The Firebirds bring up the rear of the Western Conference with a 19-40-3-2 mark.

Matthew Philip led a balanced attack with a pair of goals and an assist.

“It feels really good,” Philip said. “We haven’t had a blowout game like that.

“A lot of guys were gripping the sticks, but a lot of those guys got some lucky bounces and hopefully they can keep that going.”

Philip’s two goals give him 16 on the season and snapped a eight-game goal-less drought for the speedy winger.

“(It felt) very good. I was starting to lose confidence a little bit. I haven’t got a goal for a while so it definitely felt good to get one.”

The IceDogs, who have had a penchant for starting games slowly, raced out to a 3-0 lead after one period. Bradey Johnson got the scoring started with his 11th of the season before Willy Lochead and Philip scored less than a minute apart late in the period.

“We always joke around wouldn’t it be nice to have one of those games where you put the game card away and roll the lines,” Niagara coach Billy Burke said. “To actually have that today was nice, but it wasn’t easy. The guys had to work hard to get it.”

Burke liked how his charges came out strong.

“Anytime you can get a lead it’s good, especially against a younger team like this,” he said. “The longer you let them hang around, the more confident they feel and the more the pressure starts to tilt on the other side of things.”

Niagara padded their lead in the second with three more to take a 6-0 lead into the third. The IceDogs held a 36-11 edge in shots after 40 minutes.

The IceDogs were up 8-0 before permitting a pair of late goals.

Niagara had 15 players record at least one point.

“It really was spread around,” Burke said. “I thought the young guys really looked good tonight. It’s great to see some guys who don’t hit the scoresheet as regularly get rewarded with some points.”

Ice cubes: Johnathon Schaefer, Adrian Carbonara and Andrew Bruder did not dress for the IceDogs . . . Dennis Busby, Zach Pilon and Max Kislinger were scratched for the Firebirds . . . Niagara came into the game ranked 13th on the power play (18.5) and seventh on the penalty kill (80.2) Former IceDogs coach Marty Williamson was named OUA coach of the year for the Brock Badgers  . . . The IceDogs final home game of the season on March 17 versus Mississauga will be broadcast nationally by Sportsnet. The game time has been changed to 3:30 p.m. from the usual 7 p.m. The IceDos will wear special green St. Patrick’s Day jerseys  . . . Hunter Holmes of St. Davids and former St. Catharines Falcon Riley McCourt were both held off the scoresheet for the Firebirds.

Up next: At Hamilton Saturday at 7 p.m. Home to Windsor Sunday at 2 p.m.