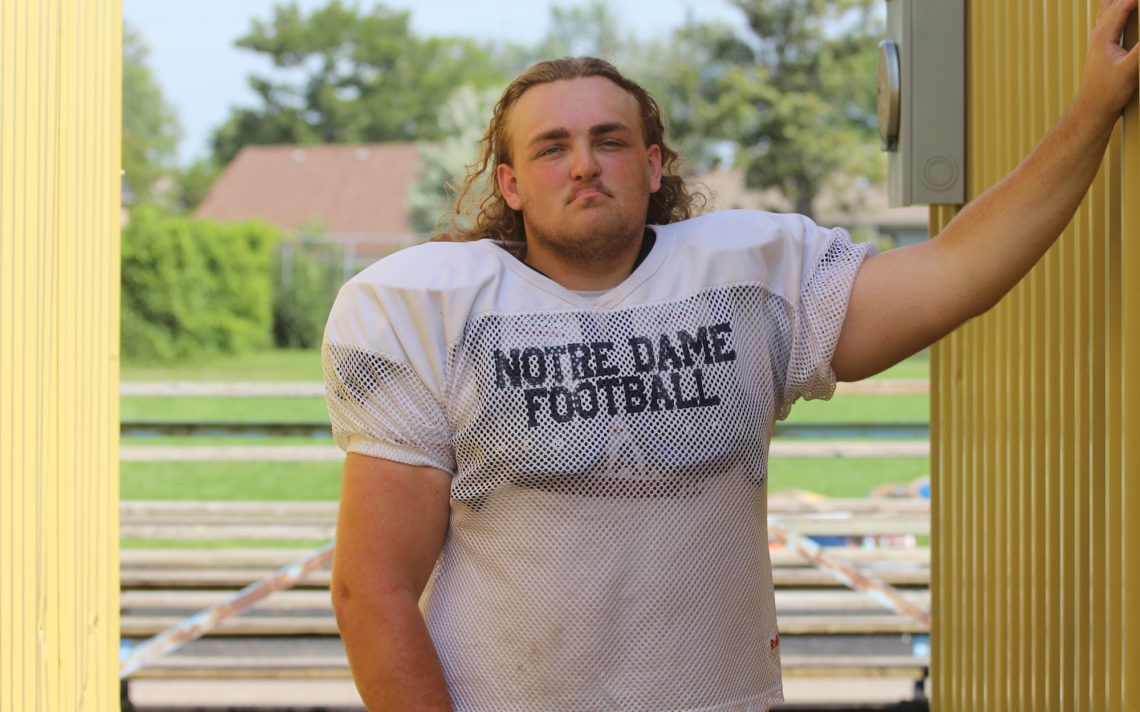 Holton and Irish not overconfident

Sure the Notre Dame Fighting Irish senior football team won its first Southern Ontario Secondary Schools Association Bowl since 2005, but the 6-foot-5, 300-pound lineman suffered a concussion in a 57-7 loss to the St. Thomas More Knights in the Golden Horseshoe Bowl.

“My personal attitude is that I want St. Thomas More again,” Holton said. “I want to finish the battle we started and this time I want to kick their butts.”

But the 2017 Niagara Catholic Athletic Association all-star on the offensive and defensive line knows there is a lot of work to do to even get there.

“I know having lost Graz (Brandon Graziani), Justin Succar, Jake Porter and Jonah Gruarin, they were some of our big-time playmakers,” he said. “Personally right now, I don’t think we are the best and I never think that. 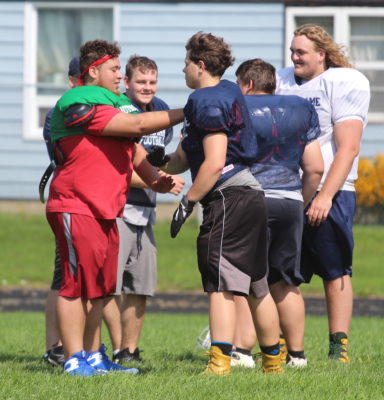 “Once you think you are the best, that is when you are going to get beat.”

Notre Dame head coach Tim Bisci is anything but overconfident.

“Last year was fun, you wish it was like that all the time, but it isn’t,” he said. “It makes it more special when it does happen.”

This fall has the same feel as the autumn that preceded Notre Dame’s SOSSA championship in 2005.

Bisci is confident he has the players in camp that can help the Irish defend their title.

“We have some good athletes,” he said. “Graz made the wheels turn, Porter kept it all together and Jonah did certain things like catching balls to get us out of jams, but there are other guys who are like that. You just have to find them and put them in the right spots.”

And the right spots may involve different schemes.

“We are probably going to change the offence up a bit and play to the strength of whoever is there,” he said.

There are three quarterbacks in the running to be the starter and no one has been ordained as the No. 1 pivot.

Bisci expects Blessed Trinity and Saint Paul to be among the top teams this season. 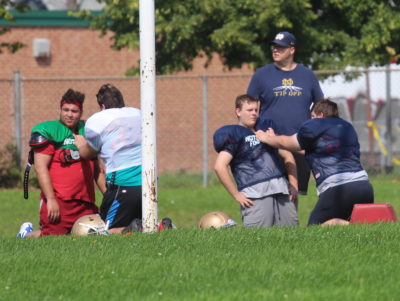 “But who knows? It is so cyclical in this league and you never know who is going to be good.”

One player Bisci knows who will be good is Holton. In last year’s Niagara final versus at A.N. Myer when the Marauders had the ball late in the game, Holton had a sack on the first down and on the third down that ended the game, Holton forced the play.

“When he wants to go, he can go and he is tough to block,” Bisci said. “And offensively, people know we run the ball to his side.”

He sees a lot of potential in Holton.

“He is young and he doesn’t understand how good he is yet and when he puts his mind to it, he is really, really good,” he said. “When he is really on, he is a man among boys.”

Holton has already drawn a lot of attention from university football scouts.

“Even last year, everyone wanted to see him and he was in Grade 11,” Bisci said. “He’s a kid that stands out. On a field with bigger kids, he is still bigger than them.”

“When I am playing, I don’t really think about it,” the Grade 12 student said. “All I think about is what I can do help our team and help us win. I don’t like to lose.”

He focuses on which schools are interested in him during the off-season and knows schooling is crucial to his post secondary football goals.

“The first step is always academics and then it’s where is my best place to play,” he said.

He is not sure if this is his last year of high school football because he wants to get an 80 per cent average and have a chance to choose any university he wants and not be limited by his grades.

“Academics, for sure, is No. 1 because there is always a life after football.”

There is no frontrunner to land his services and he admits to dreaming of playing in the NCAA and the NFL.

“My favourite football team is the Baltimore Ravens and if I ever got a chance to play for them, it would be like a dream come true.”

To achieve his ultimate goals, he agrees with Bisci that he needs to get a lot more serious about hitting the weight room.

“I work a lot but that is not an excuse,” he said. “If you want to get to the next level, you have to do extra things and you can’t expect everything to go your way based on talent.”