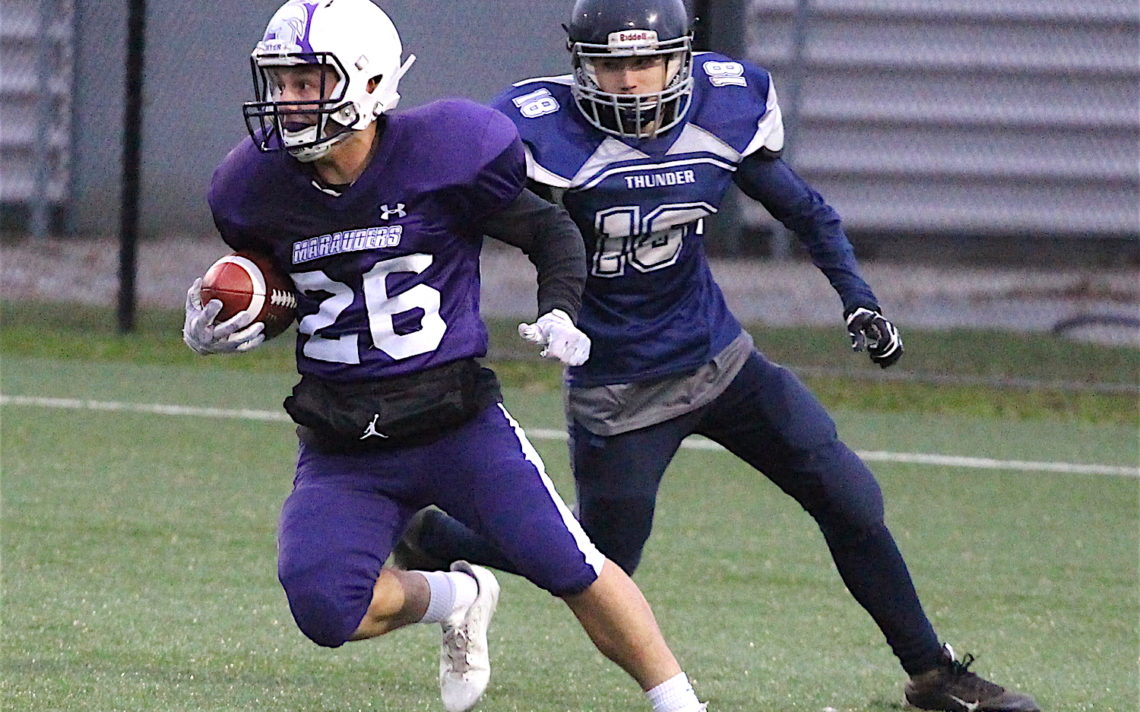 Will Anderson (26) will be one of the key returning players for the A.N. Myer Marauders junior football team next season. Myer lost 46-0 to Lorne Park Saturday in the Metro Bowl semifinals. Photo by BERNIE PUCHALSKI.

The A.N. Marauders junior football team saw an excellent season come to an end with a 46-0 loss Saturday in Toronto to the Lorne Park Spartans from Mississauga in the Metro Bowl semifinals.

A.N. Myer advanced to the game with a 14-13 quarter-final victory over Brantford Collegiate.

“They were pretty stacked and I would say Wednesday’s result will be a victory for them in the junior Metro Bowl,” Myer head coach David Lupish said. “They had a well-balanced attack offensively and their quarterback was phenomenal.

“He was a threat on the run and when you thought you had him hemmed in, he could throw the long ball and he burned us a few times.”

The Spartans quarterback threw a couple long TD passes early in the game and Myer never recovered from it.

The previously-unbeaten Marauders went into the semifinal riding an eight-game winning streak and the final loss didn’t detract from an excellent campaign.

“It was a fantastic season,” Lupish said. “At the end of the game, we told the boys that being one of the last four teams playing football this time of year is a great accomplishment.

“We were pretty heavy on the Grade 9 end of things this year and they exceeded our expectations.”

Lupish expects upwards of 25 players to be back with the team next season.

“It will be interesting to see what happens,” he said. “We had a lot of Grade 9s who started with us and practised and played in a lot of the games all season and then once we went on this playoff run, a lot of them disappeared.

“I don’t know what the reason was but hopefully we will get some of those guys back.”

Lupish expects the team will be bolstered by a talented group of Grade 9s coming in next fall and expects some of the year’s key Grade 9 players to take another step forward in their development. Among the key returnees are running back Will Anderson and linebacker Sandro Pierini.

“Those guys got some valuable playoff experience this season and that will help them moving forward into Grade 10,” Lupish said.

Myer senior quarterback Ryan James is back next year but Burke is a valuable player at a number of positions, including kicker and safety. 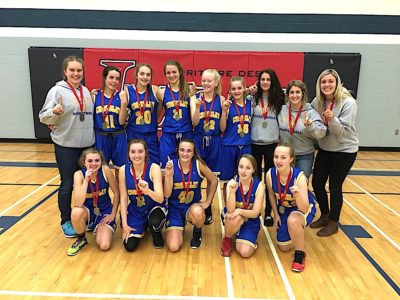 “Grade 10 standout Tess Puchalski showed great leadership on the court, taking control of the floor and her team,” said coach Larissa Bruzzese, who coached the team with Emily Danielson. “Taryn Mitchell demonstrated her natural ability driving to the net to put up points for her team.”

The Cyclone advanced to the final with a nail-biting 42-37 victory over Zone 4 champion St. Francis in the semifinals.

“Alison O’Conor led her team to victory after hitting a three pointer with less than 50 seconds to go in the game,” Bruzzese said.

“Grade 9 standouts Mitchell and O’Conor contributed offensively while Mya Newton was a defensive stopper for the team,” Bruzzese said. “Great leadership and encouragement by Grade 10 co-captains Tess Puchalski and Sydney Gummett led to the team’s success during the regular season with help from Grade 10 student Paige Clements, especially during the SOSSA tournament.”

Bruzzese and Danielson were proud of how the team played all season.

“The team not only demonstrated athleticism and talent, but their passion for the game along with their dedication and commitment to each other as a team was the key to their successes,” Bruzzese said.

The Thorold Golden Eagles defeated the Westlane Spartans 61-37 to win the consolation championship at the Welland Centennial Tip-off Tournament.

The Golden Eagles advanced to the consolation final by defeating Grimsby 59-37. Leading the way in the win were Spencer (15), Devon Maltby (12) and Harrietha (12). Topping the scoring for Grimsby were Pasaluko (10), Esguerra (6) and Clark (4).