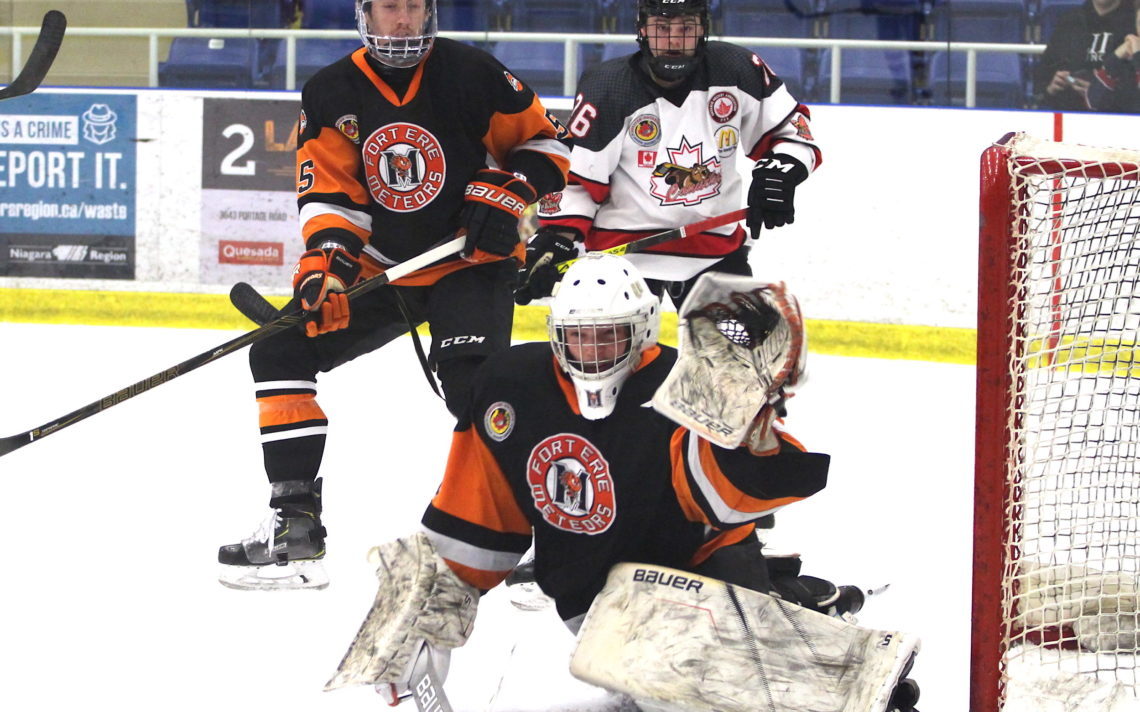 Hearne happy to be back

Jacob Hearne has his ducks in a row for both the short and long term.

The 20-year-old netminder has rejoined the Fort Erie Meteors after signing with the Toronto Jr. Canadiens of the Ontario Junior Hockey League to start the season.

Hearne was thrilled to be back on the ice with the Meteors after not being able to practice since Christmas in Toronto.

“It was definitely rough,” he smiled. “The conditioning was bad, but it was good to be back. You have to get the rust off and after about an hour it was back to normal.”

Hearne is hopeful of getting into some exhibition scrimmages with the Meteors which is dependent on the Niagara region being moved into the orange zone. Niagara is currently in the red zone which permits 10 players and two coaches on the ice for practice, but no games.

“Hopefully we’re going to start playing some games if the numbers allow it,” he said. “Toronto has been in lockdown. Here, they were getting on the ice again and it’s pretty much my home away from home. I’ve been here for three years so it was nice to come back and get on the ice even if we don’t play games.”

Hearne, who hails from Ennismore (near Peterborough), wants to keep as sharp as possible after committing to Plattsburgh State University for the 2021-22 season.

“They approached me and we kept in contact over the summer,” he said. “When the season got cancelled I thought it was time to make a move and secure a spot for next year.”

Hearne admitted he was getting nervous about next season.

“It was definitely stressful but what kind of kept me at ease was that everyone in the country was going through the same thing,” he said. “I was fortunate enough that they approached me last year.”

Hearne is excited to join Plattsburgh, a Division 3 program which plays in the State University of New York Athletic Conference.

“They run an amazing program,” Hearne said. “They have top-notch facilities, lots of fans. It’s a D1 experience but at a D3 school.”

Hearne wasn’t able to visit the school due to COVID travel restrictions.

“It’s a very big decision. I did a virtual tour and talked to coach. It was awesome to see the facilities there, not just the arena, but everything else too. It’s amazing,” he said.

“It’s a top school in the country with a fan base and a great coach and a great conference,” Passero said. “I think it’s a big coup for Plattsburgh to get Jacob. It looks good for the league too.

“He was a starter for three years and he put in a lot of work through a lot of ups and downs. He deserves everything coming his way.”

Hearne, who is deciding between studying to become either a chiropractor or a teacher, is hopeful of stepping into a starting role.

“I have to earn my keep,” he said. “Nothing is secure. I have to go in there and prove myself but there is an opportunity for me to play a lot of games next year. That was the really exciting part for me and my family, that I’d be able to go in and not ride the pines the whole time. I’ll be able to get into some games and get some experience.”

Hearne, who will split time in goal with Grimsby’s Dalton McBride if the Meteors do make it back on the ice for games this season, is itching to get back into action.

“It’s tough. It’s the longest I haven’t played hockey in my life,” he said. “It makes you miss it and realize what you had and appreciate it a little more and also makes you hungry to come back and do better.”