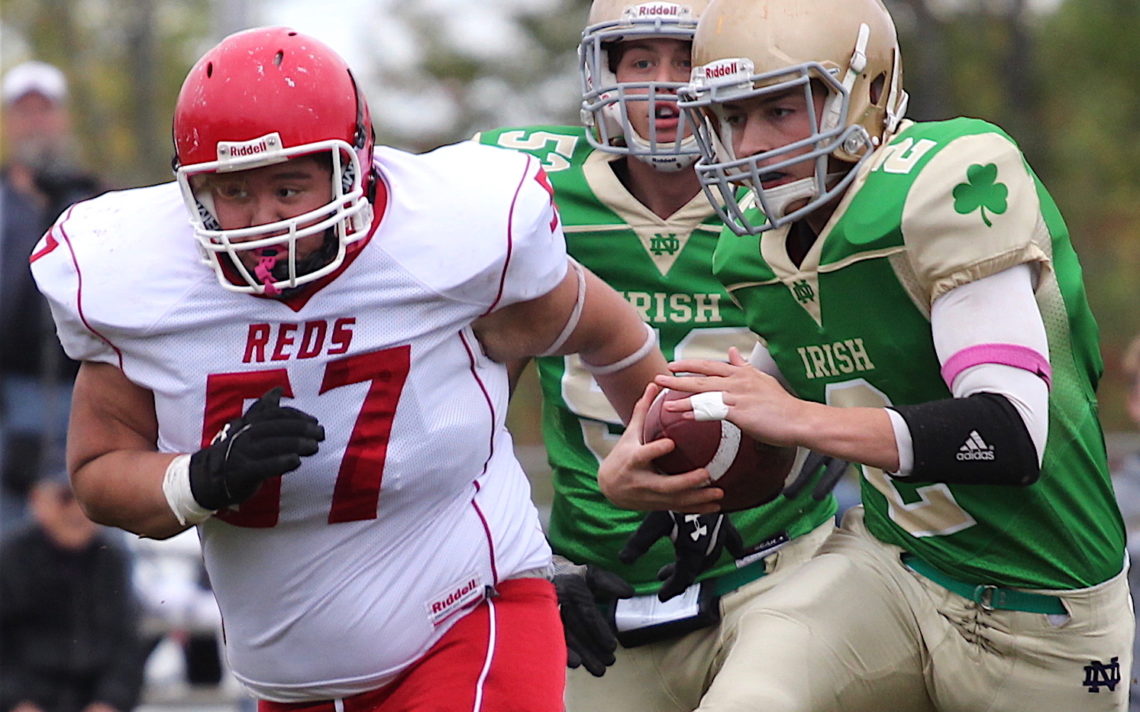 Leading the Notre Dame Fighting Irish to an unbeaten season and berth in the Niagara championship game versus A.N. Myer has garnered quarterback Brandon Graziani the Rocky DiPietro Award as the Niagara Catholic Athletic Association’s offensive MVP and one of three slots on the all-star team at the quarterbacking position.

Graziani has led his team to eight straight victories with his arm and his legs.

“He has come a long way and has developed since Grade 11,” Notre Dame head coach Tim Bisci said. “We have been running the same offence for the last three years that he has been here and he has really picked it up.”

Despite not playing any summer ball since elementary school, the six-foot, 175-pound Graziani has attracted the interest of Canadian university scouts.

“He has had a lot of success and, if you go back to two years ago, he was the starting quarterback on an 0-6 team,” Bisci said. “Last year, we won three games and this year we ran the table.”

Although he didn’t play summer football, Graziani worked on his throwing in the off-season to perfect his craft and get to the point where he could play at the university level.

“I don’t know what scouts are looking at but he throws a decent ball, he needs to work a bit on his mechanics, but the kid can scramble and he can run a read-built offence that people would love to run,” Bisci said. “It would be interesting to see him at the next level.”

Named the winner of the Paul Barchiesi Award as the NCAA’s defensive MVP was Saint Paul’s Nick Federico. Federico also received all-star nods at both the linebacker and running back positions. 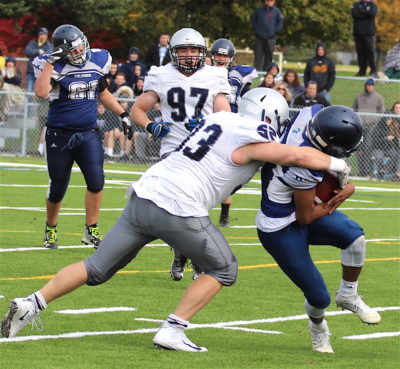 “Nick has been playing football since he was eight years old and has excelled at it,” Saint Paul head coach Rick Oreskovich said.

Prior and during his time at Saint Paul, the 12B student has suited up for Niagara minor football, the Niagara Generals and the Niagara Spears at a variety of different positions.

“Nick has a high football IQ, understands the game and plays it at an intense level,” Oreskovich said. “He’s a tremendously tough fullback and linebacker and has the hands of a receiver and the foot coordination of a tailback.”

He feels Federico has a bight future ahead of him in football.

“If he continues to work hard academically and in the weight room, Nick will be an extremely attractive prospect at the CIS (Canadian university) level.”

While Federico’s season ended with a semifinal loss to Blessed Trinity, Graziani leads his team into Wednesday’s Niagara final against the A.N. Myer Marauders at 7 p.m. at Kiwanis Field in St. Catharines. Myer is riding a 28-game winning streak dating back to the 2014 season.

“Myer is athletic,” Bisci said. “We will go out and hopefully have a game plan in place that matches up our athletes with their athletes, and let the chips fall where they may.”

Prior the senior game, Myer and Blessed Trinity will meet in the junior championship at 4 p.m.

Tickets are being sold at the participating schools for $2 for students and $3 for adults. All tickets at the gate will be sold for $5.

There will be food sold at the game and fans are encouraged to car pool to the event.

Below is a list of the offensive and defensive all-stars as selected by coaches in the NCAA league.