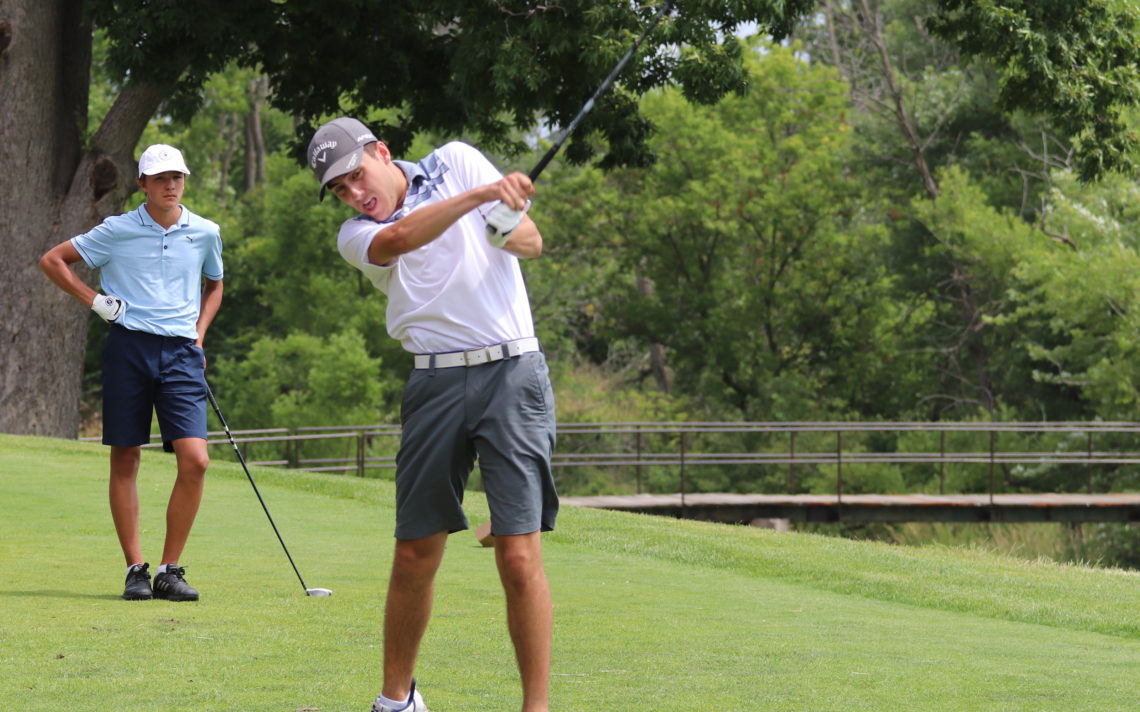 Hudson Mielko can’t wait to tee it up this week at the Ontario Summer Games golf championship at Brae Ben Golf Course in Mississauga.

“I have heard about the course and it looks in great condition. It is going to be a great atmosphere because everyone from the different tours are coming together to play in a big event,” Mielko said, prior to teeing it up at a junior tour stop Wednesday at Twenty Valley. “It is going to be a lot of fun.”

He is excited about the whole event.

“It will be the experience of playing in a different event than what I am normally used to. You have to play well but you also have teammates there for you.”

The Grade 12 student at Blessed Trinity started swinging a club when he was eight, joining his father and grandfather on the course. The 3.4 handicapper at Sawmill came within one stroke of qualifying for the Drive, Chip and Putt National Finals at Augusta National.

He also won twice on the Niagara junior tour two years ago at Rockway Vineyards and Beechwood.

The former junior club champion at Sawmill feels he is making strides in his game.

“Distance-wise, I hit the ball a lot further which has helped me to shoot lower scores.”

“The amount of practice I put in has also helped me to lower my scores,” Mielko said.

He practises five to six times a week and never thinks of it as a grind.

“I grown up in the game and have fallen in love with it. I had a talent for it at a young age and I have been working hard at it.”

The next step in his game is what most golfers are chasing.

“I have to get more consistent with my irons. My iron play has been dragging me down sometimes and I have to get that back into form.”

His goals are to earn an NCAA Division 1 scholarship and play on the pro tour.

“He hasn’t played great this year but he was steady last year. He is keen, he is a good kid who is still in the learning process but I think he has lots of potential. To sustain a four-year period of playing really well and having constant improvement is really tough.”

Lacey, a 16-year-old Port Colborne resident, is excited to be competing in the Ontario Summer Games.

“I think it is going to be a really good experience to meet new people and it will be a different kind of asset to have,” the three handicapper at Cherry Hill said. “It will be fun to play with people I don’t know and the opening and closing ceremonies will be a cool part of it as well.”

The Grade 11 student at Port Colborne High School has won on the local junior tour four times in her career but is still looking for her first victory in 2022.

By her own high standards, she is having a bit of an off year in terms of results.

“I have continued with what I have been working on with John (White) and taking that into practice by myself,” said Lacey, who started taking golf lessons when she was eight. “I have been really preparing for these types of things.”

She feels she is close to a breakthrough in terms of scoring.

“It is definitely getting there and for me the biggest thing is the mental part. That is probably the weakest part of my game. I tend to get in my own head and sometimes I can’t get out of it.”

The high point of Lacey’s summer so far is shooting 83 and 81 at the Loyalist Golf and Country Club in Kingston to miss the cut at Ontario women’s amateur by three strokes.

“She is strong and athletic, she works hard at her game and she is having a bit of a frustrating start to her season,” he said. “I know she expected to play better but I still think there is lots of upside to her game and so much potential. She has lots of speed, she hits it far enough, she understands the game, she has the right mannerisms and it is just a matter of breaking through that scoring barrier whatever it is. I am fully confident that she will.”

Niagara’s Ontario Summer Games squad was picked based on a number of factors.

“It was a combination of results and giving some of the younger ones an opportunity to play in an event as big as this,” White said. “I gave some a chance to play in hopes that it might benefit their career and have an experience they might really enjoy.”

He expects all the Niagara golfers to enjoy that experience.

“It’s a big deal in the sense in the way that it is organized. They have an opening ceremonies, they get housed and it is almost like a mini-Olympics.”

Three or four Summer Games ago it was decided that the field would be made up of the various junior tours across the province.

The annual tour team championship, called the Humber Cup, hasn’t been played since 2019 because of the pandemic and the event this year will be replaced by the Summer Games event.

Below are the leaderboards from Wednesday’s tour stop at Twenty Valley.