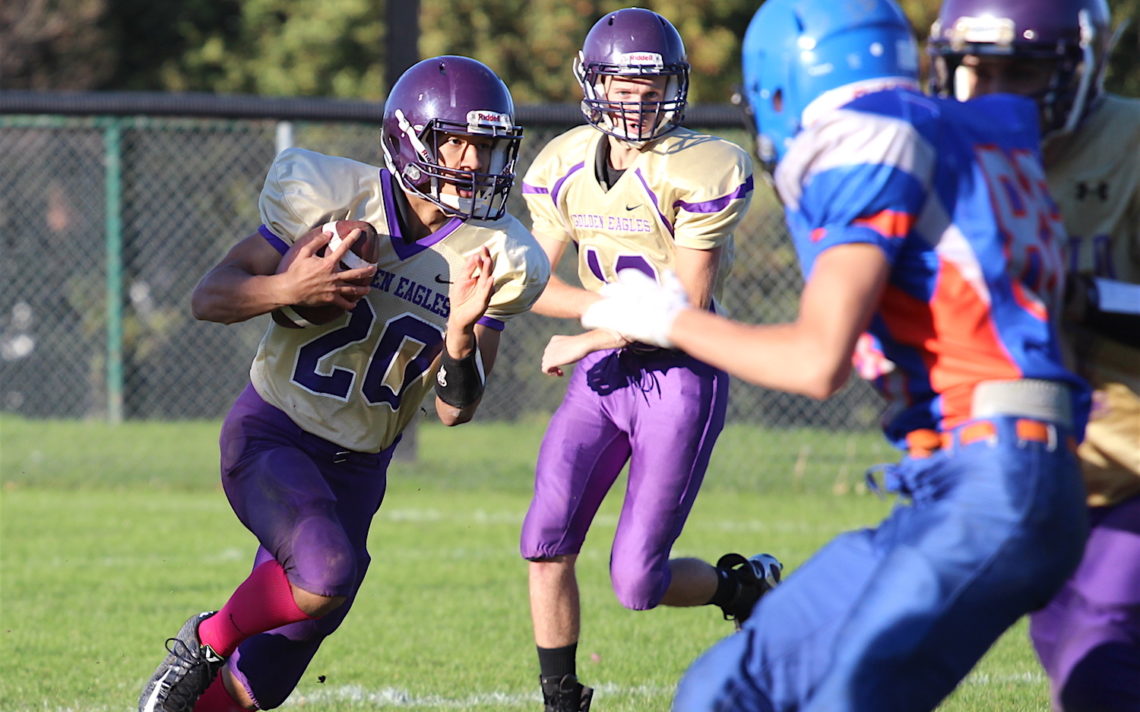 The Thorold Golden Eagles finished the NRHSAA Tier 1 senior football regular season with a 2-3 record following a 24-14 victory over the Centennial Cougars. Photo by BERNIE PUCHALSKI

The Thorold Golden Eagles began and ended their first regular season in Tier 1 football with victories.

In between a season-opening 43-19 victory over Sir Winston Churchill and Friday’s 24-14 triumph over the visiting Centennial Cougars, were three losses and a whole bunch of lessons learned in Niagara Region High School Athletic Association play.

“The season was pretty much what we expected,” Thorold head coach Duane Kemp said. “We expected every game to be a battle, which it was, and every game we learned a lot about ourselves and other teams, and what it takes to win at this level.”

The biggest lesson learned is that mistakes made in Tier 2 can be overcome, but mistakes at Tier 1 cost teams football games.

“Today, we gave Centennial multiple chances by taking stupid penalties and you can’t do that in Tier 1 and expect to win,” Kemp said. “Luckily we got a few more points than them today, but we have to be a lot sharper going into the playoffs.”

The only game the Golden Eagles were really blown out in this season came against the three-time defending OFSAA Bowl champions from A.N. Myer. They were not alone as the Marauders outscored their opposition 244-21.

Competing against Myer will take some work.

“In the off-season, we have to get the guys in the weight room and we have to get guys thinking about football 12 months of the year instead of two or three,” Kemp said. “And we need to execute. They are crisp on offence and all 12 guys are flowing and know exactly what they are doing.

“We’re not quite there yet.”

Kemp believes there’s a will in the school to step up its game at football.

“The kids are starting to buy in and believe, and they realize moving up to Tier 1 is a whole other level,” he said. “Tier 2 was tough but at this level, guys eat, breathe and sleep football 12 months of the year.”

Thorold running back Matt Christie has played five years of football at Thorold and this was by far Thorold’s toughest year.

“It’s not easy football,” the 5-foot-11, 222-pounder said. “Division 2 we could mess up a couple times and learn from it and Division 1 if we messed up, we had to face the consequences.”

The 18-year-old believes Thorold football will be up to the challenge to take its game to another level.

“Our school is behind us and we are behind them,” he said. “We have always been a Division 2 or 3 team and if we want to show that we belong in Division 1, we have to do more work.”

This will be Christie’s last season of high school football and he’s hoping to play at the next level. Guelph has been talking to him and he’s also thinking about following older brother Alex and playing football at the University of Manitoba.

“I love the sport and I want to keep playing as much as possible,” the 12B student said.

Scoring touchdowns for the Cougars were Federico Roman and Caleb Pelletier.

“Both teams have been struggling with injuries and we knew what we were up against,” Centennial coach Darren Jackson said. “Our numbers were down but it was a good football game.”

The season has unfolded pretty much as what Jackson expected.

“We thought at the beginning of the season that there would be five teams that would be pretty close,” he said.

The A.N. Myer Marauders clinched first place and home field advantage throughout the playoffs with a 59-0 romp over the Sir Winston Churchill Bulldogs.

Ryan James threw five TD passes, including two to Dallas Bone and Matteo Corritore and another to Lucas Mazzone. Rico Charnonneau contributed a pair of rushing majors and single running TDs were added by Trent Hinter and Lucas Mazzone. Bone booted all the converts and a field goal.

The Greater Fort Erie Gryphons clinched second place in the NRHSAA Tier 2 division with a 22-7 victory over the Westlane/Stamford Spartans.