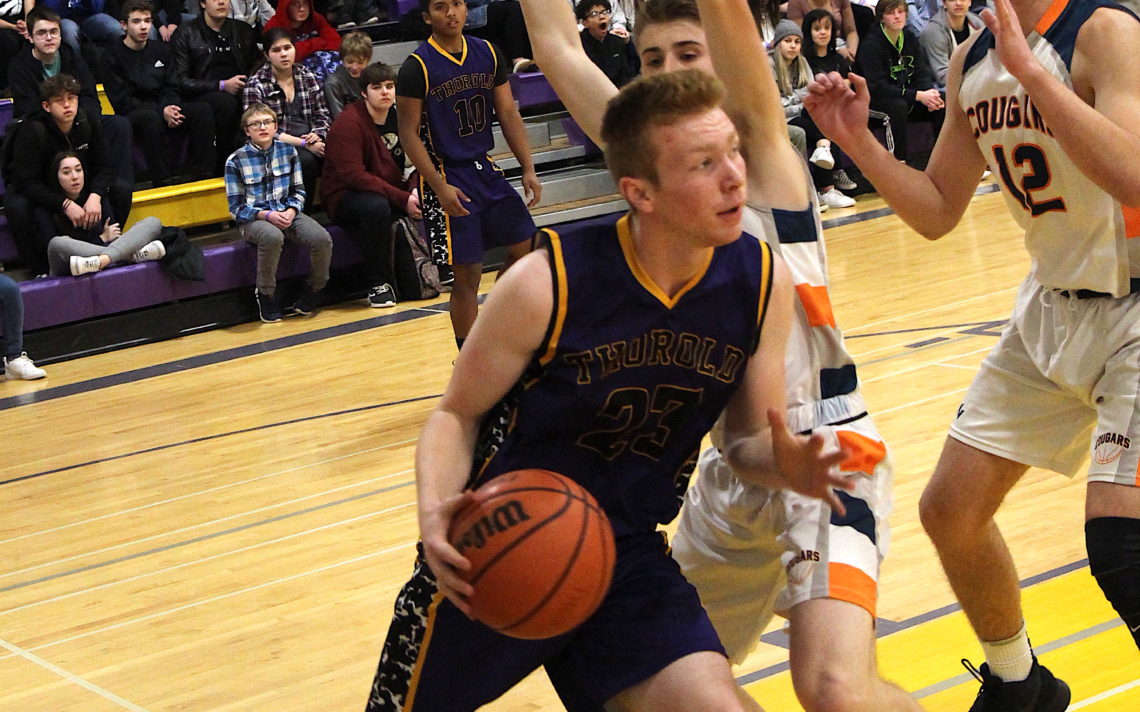 Connor Schuman never met a shot he didn’t like.

The 16-year-old, Grade 11 student loves to shoot— particularly from long range — as evidenced by his performance Monday.

Schuman poured in a team-high 14 points to pace the Thorold Golden Eagles past the Centennial Cougars 52-44 in an opening round game at the 58th St. Catharines Standard High School Basketball Tournament at Thorold.

Schuman didn’t deny for a second he enjoys having the ball in his hands.

But Schuman also realizes there is a time and a place and had to be reminded of that in the second half by Thorold coach Jon Kwiatkowski.

“If I have an open shot I’m going to take, it but if I see the defender is rushing me I’m going to pump fake and try and look for an inside shot as well,” he said.

Kwiatkowski gave Schuman some on-the-fly instructions from the bench at one point after be took an ill-advised shot.

“All of our small guards can shoot, but sometimes it’s not ideal,” Kwiatkowski said. “When you have a big team you want to slow it down and attack inside and put them on the foul line.”

Schuman, who plays travel for the Pelham Panthers, hit a couple of early three’s before going cold for a spell and then finding his range again.

He feels it’s that being a shooter, he keeps on shooting.

“It’s important for me because you can go in spots where you miss a few so you just have to stay confident and keep shooting,” he said.

The Golden Eagles rebounded after losing to the Cougars in league play last week where they jumped out to a big lead, only to see Centennial rally for the win.

“We really wanted to focus on their shooters,” Schuman said. “We pinpointed some shooters they had so they wouldn’t get open shots.”

Kwiatkowski liked a lot of what he saw from his club, although he feels there is always room for improvement.

“We want to push. It’s experience. It comes down to my seniors lack that experience. The little things make a big difference, especially with the pressure,” he said.

“Some of our guys thought the game was over, that was the other thing. They came right at us. It’s not eight or 16 minutes, we’re looking for that whole 32 minute-effort to win.”

Centennial coach Craig Maltais would have liked to see his charges buckle down more.

“We played last week. It was the first game of the season and we were a little bit frantic when we came out so we wanted to calm things down a little bit and we did, but I felt we were going a little too slow on offence and the intensity wasn’t there,” he said. “It’s trying to find that balance between being in control of the game, but also being intense enough on offence and defence to get the momentum.”

Maltais said the Cougars now have their sights making the best of the situation.

“We want to get all the way there Friday night and win that consolation championship and do what we have to do,” he said. “We have a young team with a lot of new guys and they’re trying to find their role and trying to find chemistry with one another. It’s only been two games so there is a lot we’re taking away from it.”