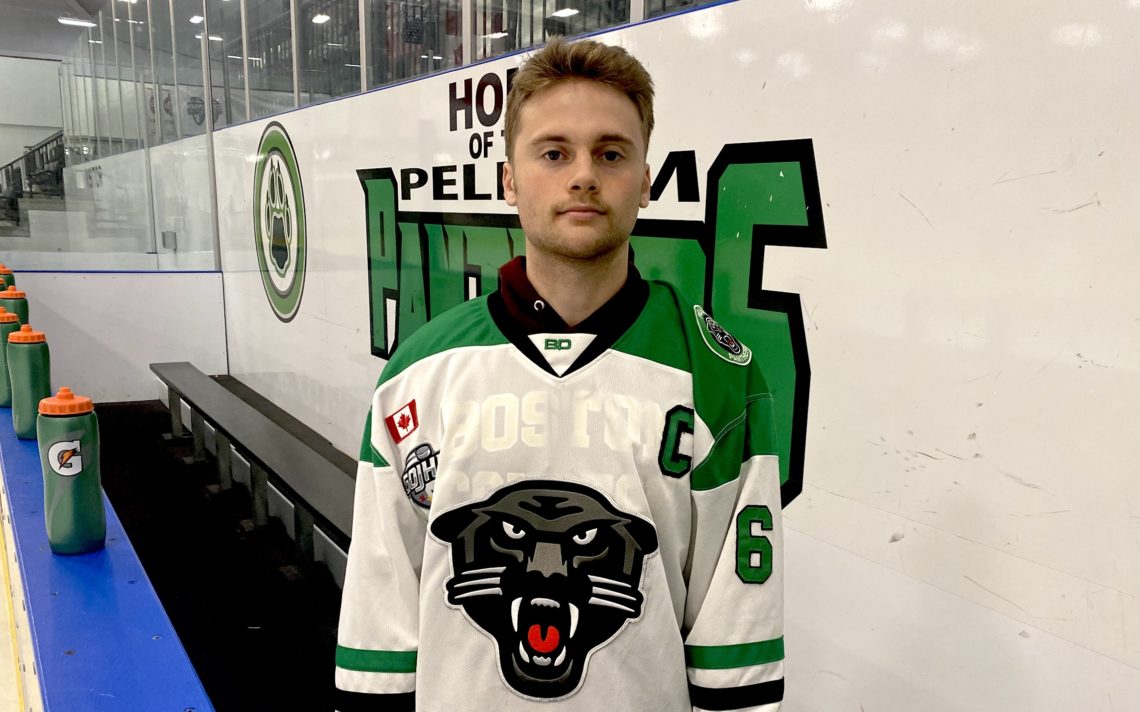 Gee happy to wear the C

Jason Gee had no problem taking on the extra workload when the Pelham Panthers named him captain.

“It takes a little bit more than a normal individual but I love that,” the 20-year-old Kitchener native said. “I like having more responsibilities on my shoulders and I’m willing to put in that time and effort.

“I want to make other people better because in turn that makes me better.”

The Panthers named Gee captain before the start of the 2022/23 Greater Ontario Junior Hockey League season after the reliable defenceman spent the last couple of seasons as an assistant captain.

“Jason has been here with us for four years and he has worked extremely hard in that four years,” Panthers general manager Tim Toffolo said. “He has always shown the utmost respect for the organization and all of the players and his teammates.

“We know that Jason will continue to work hard to keep the entire team on the right page working towards our goal of winning a championship.”

Gee figures it takes a wide variety of skill sets to be a good leader.

“A guy who leads both on and off the ice, does all the little things right, helps the younger guys get acclimatized to the league and the pace and teaching them the ropes of what it takes to become a successful junior hockey player,” he said when asked for his definition of a good captain.

Gee said he appreciated the help of his former captains when he joined the Panthers.

“My previous captains (Devin Sanders and Jordan Tutt) always guided me,” Gee said. “They were older guys and looked out for me and that’s what I’m trying to do for the younger guys now, look out for them and their best interests.”

According to Gee, the importance of that mentoring can’t be stressed enough as players transition from minor to junior,

“It’s a really big jump. I remember when I was 17 and the pace was much faster and every decision you had to make was much quicker and people are bigger and stronger. As long as you’re willing to work hard and listen and adapt you’ll have success,” he said. “It’s something where you always need the older guys to look out for the younger guys just because it’s all new information to them. In order for them to get acclimatized, they’ll need someone looking over their shoulder to make sure they’re doing all the things right and doing what they should be.”

“They help me out all the time with all the tedious little things that have to get done. They’re all amazing leaders as well and we lean on each other,” Gee said.

Gee, who is concentrating exclusively on hockey this season in hopes of garnering an offer to a D3 school south of the border, has a goal in four games this season.

The Panthers dropped their first two contests before picking up three of a possible four points on the weekend versus the defending Sutherland Cup champion St. Catharines Falcons.

“It was a massive three points,” Gee said. “We have a bit of a younger squad but we’re starting to come together and learning the little things. We’re going to be a hard working team and I think we showed that against St. Catharines. To be honest, I think we can beat any team in the league if we continue to work hard and grow.”

The Panthers take on the Chatham Maroons Friday at 4:30 p.m. and the Sarnia Legionnaires Sunday at 1:30 p.m. as part of the GOJHL’s Showcase weekend at the Meridian Community Centre in Pelham.