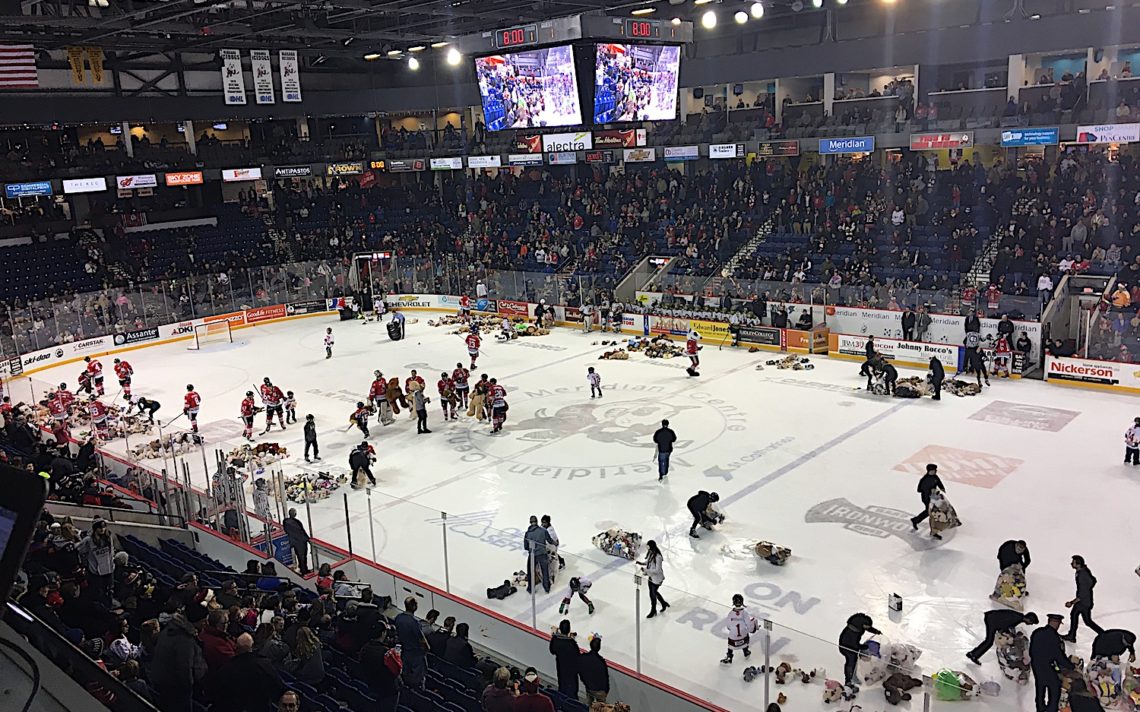 The Niagara IceDogs had a handful of ready-made excuses to explain a sub-par effort Friday and head coach Billy Burke wasn’t buying any of them.

The IceDogs had won seven of their last eight so perhaps they were due for a letdown.

Or maybe they were looking ahead to a big matchup with the Barrie Colts Saturday.

Or was it that the North Bay Battalion just played better and deserved the win?

“We were just flat right from the start,” Burke said following a 6-3 loss to the Battalion in an Ontario Hockey League game Friday night at the Meridian Centre. “They were more ready to go than us. We were cheating, lazy.

“It was a bad night. It was a missed opportunity.”

Having said that, Burke was ready to forgive and forget so long as the IceDogs show up Saturday for a key matchup versus the first-place Barrie Colts.

“It was our first bad one in 10 games so I can live with it so long as we bounce back tomorrow,” he said. “You throw this one away and kick yourself at the end of the season that you let two points get away from you at home.”

The IceDogs didn’t do much right, from the normally reliable Stephen Dhillon in goal, on out.

“We had turnovers in the neutral zone and turnovers in our own end,” Burke said. “We got lazy. Our forwards wanted breakaways and didn’t want to come back and our D wanted to throw it all the way up the ice.

“It was just a bad effort all the way around. Our forwards can’t carry us, our D can’t carry us. We have to do it together. We didn’t support each other.”

North Bay opened the scoring just over seven minutes into the first when Patrick Brown jumped on a turnover and beat Stephen Dhillon. Johnny Corneil tied things up after in the period with his seventh of the season.

The Battalion opened the second with a power-play goal by Kyle Potts just 1:46 into the second. Niagara started the period with a two-man advantage but quickly took a penalty.

North Bay added to their lead when Dhillon’s clearing pass was picked off by Justin Brazeau who fired home his 24th of the season. Kirill Maksimov got the IceDogs to within one when he combined with Ben Jones on a pretty passing play for his 19th of the season.

The Battalion quickly put to rest any thoughts of a Niagara rally with two goals less than two minutes into the third to make it 5-1.

That was enough for Burke to yank Dhillon, who permitted five goals on 25 shots, and give him the rest of the night off in favour of Colton Incze.

“He made some big saves but you expect so much out of him,” Burke said of Dhillon. “He got no help from the guys. It was one of those where you can’t sit 20 guys so you pull the goalie.

“I couldn’t think of one guy who played well.”

Jones then netted his 12th of the season with four minutes remaining to round out the scoring.

Ice cubes: Joshua Dame, Drew Hunter, Billy Constantinou and Bradey Johnson were scratched for Ice Dogs  . . . Eric Allair, Rhys Forhan, Daniel Walker and Brad Chenier did not dress for the Battalion  . . . Academic player of the month for November Justin MacPherson was honoured before the game . . . About 1,000 Teddy Bears were tossed on the ice following Niagara’s first goal. All teddies will be donated to Victim Services Niagara  . . . Beamsville native Adam McMaster was held scoreless for the Battalion  . . .  IceDogs forward Akil Thomas has been selected to compete in the 2018 Sherwin-Williams CHL/NHL Top Prospects Game at Sleeman Centre on Thursday, Jan. 25.

Up next: The IceDogs host Barrie Saturday in their final game before the Christmas break. They are back in action Thursday, Dec. 28 at North Bay. Their next home game is New Year’s Eve versus Hamilton at 6 p.m.

Owen Savory made 24 saves for the shutout.

“We did a good job of capitalizing on our chances tonight. We had a very solid third period that was the result of some good, hard work in the first and second,” Falcons coach Dan Fitzgerald said. “Owen was great for us when called upon and our special teams were very solid. We have a week until our next game will give us sometime to polish up some areas where we expect to be better.”

The Falcons, 22-7-1-2, are home to Fort Erie next Friday in their final game before the Christmas break.

The Niagara Falls Canucks jumped out to a 4-0 lead in the first period en route to an easy 9-0 win over the visiting Buffalo Regals at the Gale Centre.

Noah Fortuna picked up the shutout with 23 saves.