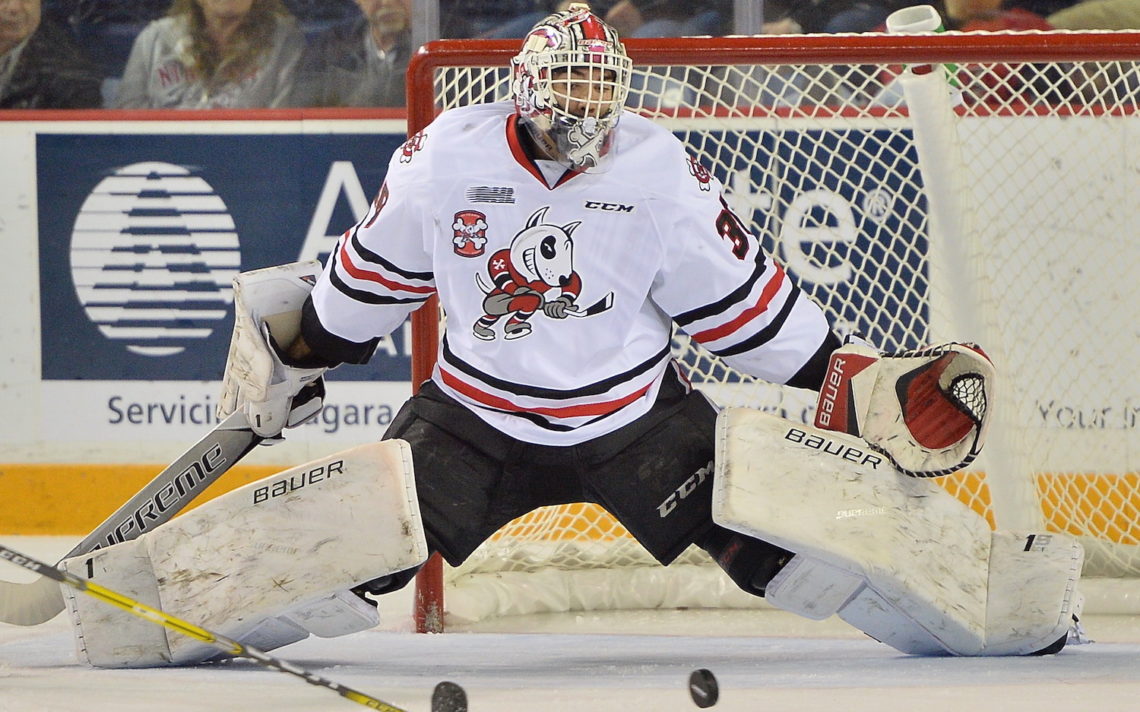 The Niagara IceDogs dropped a 6-5 decision at Ottawa Friday. Photo by: OHL IMAGES

A furious third period rally came up just short as the Niagara IceDogs dropped a 6-5 decision to the Ottawa 67’s in Ontario Hockey League action at TD Place Friday night.

Coupled with a Barrie win in London, the IceDogs and Colts are now tied atop the Central Division with 59 points. The IceDogs have played one fewer game.

“They were the more desperate team for 42 minutes,” Niagara coach Billy Burke said.  “We didn’t match their intensity until the last 18 minutes in the third when we were able to score three and make it a one goal game with a few chances in the last minute to tie it but too little, too late.”

Ottawa took a 2-1 lead in the first period on goals by Mitchell Hoelscher, just 1:19 in the game, and Nikita Okhotyuk’s fifth of the year with just over three minutes to play. In between, Elijah Roberts netted his seventh of the season for the IceDogs.

Sasha Chmelevski made it 3-1 Ottawa early in the second before Billy Constaninou’s third of the season got Niagara back to within one at 3-2. Tye Felhaber then ripped in a pair of goals less than one minute apart to give Ottawa a 5-2 lead after 40 minutes.

The IceDogs had an opportunity to get back in the game starting the third period on the power play but instead gave up a short-handed, breakaway goal by Shaw Boomhower. To add insult to injury, Niagara goaltender Stephen Dhillon was shaken up on the play and was removed from the game.

That goal would prove to be costly as Johnny Corneil and Sam Miletic scored back-to-back power-play goals to make it 6-4. Miletic, who was named the OHL player of the month for January leading the league with 25 points in 13 games, then notched his second of the night with 1:27 to play to make it 6-5. Miletic nearly completed the comeback when he rang a shot off the post with 17 seconds to play.

The IceDogs are at Kingston Saturday at 7 p.m. They return home Thursday to play the Sault Ste. Marie Greyhounds.

Michael Davies gave the Falcons a 1-0 lead after one before Matt Busby, on the power play, and Tristian DeJong added goals in the second period.

The Junior Canadians rallied with a pair of quick power-play goals in the third by Matthew Giannini and Anthony Grigg but could not beat Dillon Lamarche for the equalizer.

“We opened the door for them after playing a really good second period and we can’t be doing that with any team,” Falcons coach Dan Fitzgerald said. “When we have control of a game, we need to keep control. We have another chance to play a 60 minute game on Sunday and we will be ready for it.

“It was nice to get some offence from our blue line, as well. They’ve played well and it’s nice for them to be rewarded on the scoresheet.”

The Falcons are back in action in Welland Sunday for a 1:30 p.m. matinee and home to Pelham next Friday.

Zach Moore made 28 saves for the shutout as the Niagara Falls Canucks blanked the visiting Pelham Panthers 1-0 at the Gale Centre.