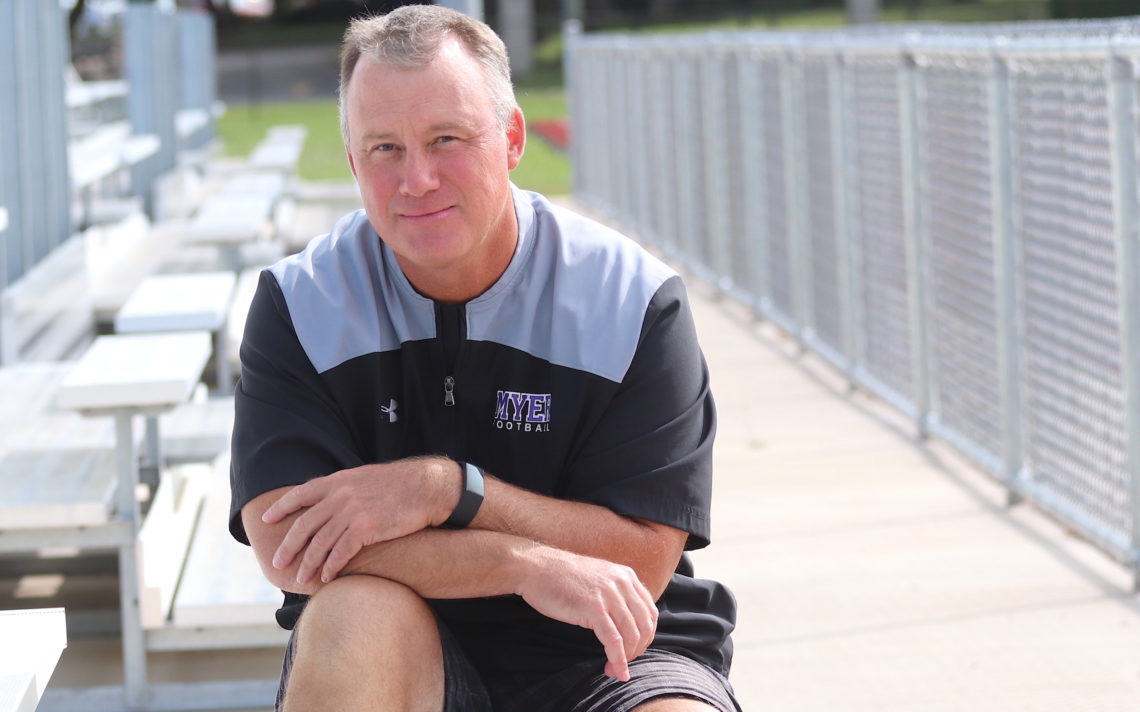 Head coach Dave Buchanan has been at the helm for Myer’s impressive run, but he was also in charge during a particularly dismal time in the program’s history.

That season presented plenty of introspection for the novice head coach, who had helped Brad Martin coach at Stamford and was on Chris McBride’s staff at Collegiate.

“I think I had a responsibility to Myer as an alumni to represent them as a coach in a way other than just doing a good job in the classroom,” said the former Myer slotback. “And there was an internal drive to want to do well. I wasn’t doing well and I was embarrassed. That drove to look in the mirror and figure out what I had to change.”

Getting thumped was an unfamiliar feeling for Buchanan, who enjoyed football success under the Three Amigos (Dennis O’Connor, Martin Bissell and Wayne Devitt) at Myer and baseball success playing at the NCAA Division 3 level with the Marietta Pioneers in Ohio.

“I was very spoiled because we had always had success here. I never lost here and then I went to school and never lost in baseball,” he said. “I wasn’t tough enough with dealing with that adversity and I had to have that experience. What it taught me was that I didn’t really know anything as a football coach.”

Buchanan had learned valuable lessons working with Martin and McBride, but he knew he had to fully immerse himself in the game. He began by looking at what the successful programs like Lakeshore Catholic, Saint Paul and Notre Dame were doing.

The first ingredient for success was clear.

“Obviously, we needed good players because if you have good players, the better you do. I’m not ignorant of that, for sure, especially when we had the Ford brothers (Tre and Tyrell) and that group.”

Next up was building a staff and educating it.

“I started to do a lot of work in trying to get more coaches here and then we studied lot, went to clinics and it became infectious,” he said. “It has come to the point now where it doesn’t ever stop. I’m constantly looking at anything I can do to get better.”

Buchanan has been able to build relationships with university coaches and every year he goes to a university camp to pick the brains of post secondary coaches.

“I knew I had to get better and I knew the structure wasn’t there,” he said. “We had to develop a junior program that was good and we had to develop an off-season program. I had to identify what I knew, what I liked and what type of kid we got here and we became more of a pass-oriented team.”

Passing turned out to be the right way to go as high school football switched to three downs from four. It also fit Buchanan’s experience as a touch football quarterback in Niagara leagues for about a dozen years.

Making everything come together would require plenty of work.

“I knew if we really worked hard and we won the rep (repetition) game, we would be OK,” Buchanan said. “That is really a mantra of ours and we have more repetitions than most.”

In season, the team practises three hours a day and additional reps are found in football-focused courses at the junior and sometimes the senior level. The team takes a couple weeks off when the season is over and then it returns to the gym. The coaches encourage players to suit up in men’s indoor touch football leagues to keep up their skills over the winter. In the spring, the team does some Sunday practices until July when workouts are held on Mondays, Wednesdays and Fridays, Players work on their speed and strength during these sessions. On Sunday, players work on skills by position, such as throwing and  catching. Linemen work on their specific skills on Thursday.

New coaches coming into the program and parents of new players tell Buchanan the program has a junior college feel to it.

“It is a little more Americanized, but my goal isn’t necessarily to be American,” Buchanan said. “The balance is OK and the kids like to be here. They don’t mind the work and they want the repetitions.”

As the players improve, so do the coaches.

“We work at getting better at coaching, not just throwing balls at them but helping them to learn how to run routes properly, how to block properly and teaching the basics of the game.

Myer’s strategy is based on the philosophy that less is more.

“We have learned to do stuff really well and not have a massively extensive playbook. There’s not a lot of plays but there’s a lot of different ideas within the plays.”

Buchanan normally spends 35 hours a week on high school football in season and it’s time well-spent in his eyes.

“This where I spend my time and I don’t care to do a lot of other social things. This is my social outlet,” he said. “It may seem restrictive or sad for some folks but I have a lot of wicked relationships because of it and I am constantly energized by new people coming in and young people. It is an easy thing to be addicted to.”

The pandemic has made him realize how important football is to him and his players.

“If you don’t have an appreciation after this, you never will,” he said. “Once we get back to playing, I think you are going to see that and it will be our job as coaches to remind players of that. You already see that with groups starting up and kids willing to just practise.”

Myer’s overriding philosophy in all it does is about family and program development. Being a family is No. 1 on the list.

“That is not just from me, that is from the kids,” Buchanan said. “Thinking of it as a family and a program and not just a football team, we are developing a culture that believes in becoming good young men. It sounds corny but it’s true and it matters.”

“They are going to be good dads, husbands and employees and they will have some success.”

Many will also move on to have a chance to play at the university level. Upwards of 30 Myer players have signed with universities when their Marauder days have come to an end.

“It took us a little while to get going but we have become way more involved in that process and we have built relationships with those coaches.”

Buchanan sends university coaches breakdowns of players on the field and in the classroom.

“They are thankful we do that work for them because recruiting is hard and they only have so much time.”

There is no sugar coating involved.

“When they ask me about a player, I am not going to lie about their character or what their grades are because if that comes back as a negative to us, it hurts all the other kids who are trying to go forward.”

Buchanan is always trying to be forward thinking with the program and 2020 is no exception.

“I felt that we were getting a little bit stagnant and I have a couple of new coaches coming into the program.”

Bryce Ivanchuk, Dan Pepe and John Foss will be on the Myer sidelines whenever play resumes.

“They are guys who are going to spent a ton of time working hard and it has reignited my energy a little bit,” he said.

For the players, Buchanan is looking to develop their skills using a different form of travel football.

“The next step is touch football and flag football. They are becoming big things and we are working directly with Matt Hill of Niagara Youth Flag Football,” he said. “Matt is going to work with our guys and we are looking to take kids to different tournaments in Canada and the States under Matty’s umbrella once COVID dissipates.”