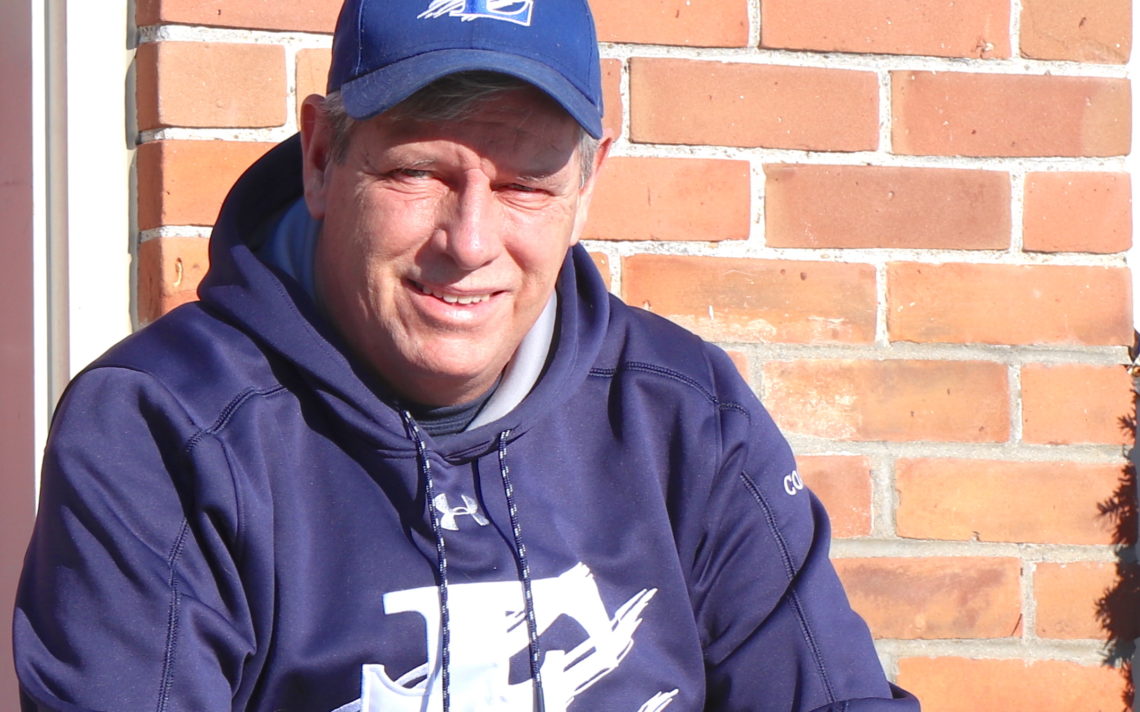 After building Beamsville’s Specialized School to Community Program to 60 students from 14, Paul Hurd was recruited by then Eden principal Ruth Hernder.

“She wanted me to do the same thing at Eden and we have built that program from 14 to 40 students which is awesome,” Hurd said.

But building the St. Catharines high school’s Specialized School to Community Program wasn’t the only thing on Hernder’s mind.

“Part of our conversation before I went there was that they needed staff to oversee the football program,” the 55-year-old Brantford native said.

Hurd became the staff advisor and assistant coach of the senior team under head coach Jordan Smith and the squad took a big step in the right direction by making it to the Tier 2 championship game in 2017.

Equally as important was a plan to get the teams more exposure.

“Last season (2019), our junior team played all our home games at Simcoe under the lights to promote school spirit and not having students miss class time while allowing the parents and siblings the opportunity to watch games,” Hurd said.

Hurd is following in the footsteps of the football programs at A.N. Myer and Greater Fort Erie Secondary school and he has received plenty of help and support from the Myer and GFESS senior football head coaches.

“Dave Sauer and Dave Buchanan have been absolutely awesome as far as asking us what we need and they come and talk to us after games,” Hurd said. “It is a gentlemen’s agreement where other coaches are helping you build your program.”

Hurd is hoping Eden’s football momentum continues to grow once the COVID-19 pandemic has been benched for good.

“Our goal at Eden is to give as many students as we can the opportunity to experience the great game of football,” he said. “The team on the field and our coaches want to create lifelong memories of a great secondary school experience.”

Hurd, who helps coach the junior and senior teams and supervises the weight room/fitness centre after school from the end of the season until June, has had the added bonus of getting to coach his older son, Jonas, and youngest son, Nigel.

The football journey with Jonas, who is on the autism spectrum, has been especially rewarding.

“When he started in the junior program, he wasn’t overly athletic but he played football for all four years,” Hurd said. “His eye-hand coordination became incredible.”

“He was the gangly kid who was having difficulty with the ladder drill or the ball was bouncing off his hands. By Grade 10, Jim Storin built him up and he was the starting safety. He played two years of senior and I couldn’t even pick him out on the field because he blended in.”

“The last four years have been amazing to be able to coach and be a part of enjoying my two sons’ secondary school experiences.”

Hurd is now off work waiting for a matching set of hip replacements and can’t wait for the time when he is able to coach and teach again.

“I wouldn’t wish this on my worst enemy, that’s for sure. Every time I stand up I don’t know if it’s going to be one step or it’s going to take me 10 minutes before my legs kick in.”

He was hoping to be back by June and ready to coach by this fall COVID willing, but that now seems unlikely.

The 55-year-old Brantford native played all high school sports growing up, including spending a memorable Grade 12 year playing high school hockey in Cape Breton with his cousin and living with an aunt and uncle.

“It was one of the best experiences ever because it is part of my heritage being in Cape Breton and living the lifestyle.”

He and his wife, Mamie, bought a house in Newfoundland 19 years ago and spend portions of their summers there.

“That’s where we go to decompress. It is simply amazing down there. You forget what day it is”

Since they bought, six other families from St. Catharines came to visit and bought houses of their own.

Hurd attended university at Brock and graduated with a degree in phys-ed.

“I went to Brock with the idea of being a teacher and somehow I got into working in group homes with juvenile delinquents and with the handicapped,” he said. “I fell upon that career path, had no aspirations in that area, and just loved it.”

Hurd ended up at the Churchill Learning Centre on Glenridge Avenue working with children with special needs and spent 10 years there as an educational assistant. During that time, he moved into a group home and took care of three to six adults with developmental disabilities and lived there for 15 years.

When the Churchill Learning Centre closed in 1999, he decided to get a teaching degree and graduated from D’Youville in 2001.

That fall, he was hired by Beamsville and started teaching while still living in the group home. His group home clients were frequent guests on the sidelines at games and practices as Hurd served as an assistant football coach under head coach Dave Mawson.

“It was the best of jobs,” Hurd said. “Not only did I get to work with individuals in creating their independence and proving life skills, I got to coach football.”

Hurd coached with Mawson, John Pellow and Chris Brown and he loved the environment created by Mawson.

“Dave was a very unique individual as a coach. You can probably visualize his red shoes and him lying down on the sidelines while he was coaching.”

Hurd was a Paul of all trades and did whatever he could to help.

“I would do everything from my class washing the uniforms to timekeeping and helping at practice with drills.”

Beamsville won back-to-back Varsity League championships in 2001 and 2000 and Hurd enjoyed the camaraderie between the leagues’ players and coaches.

“It was fun and competitive and I grew into the role where I would take the junior players and coach them up,” he said. “I like taking kids who had never played football and breaking it down by position and teaching them the game so they could eventually get into the competitive game.”